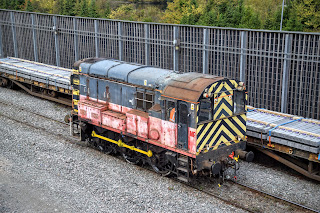 During September DB Cargo placed their entire remaining fleet of Class 08 and 09 shunter's up for sale. DB has had a fleet size of approximately 8 operational shunter's over the past 12 months with an additional 16 in storage across the country. What happens next remains to be seen, it is inconceivable to me that DB can get back without the use of dedicated shunt locos at strategically placed locations such as Hoo Junction, Eastleigh and Warrington Arpley. An experiment a couple of years ago saw the entire fleet stood down and replaced by Mainline locos only to be reversed a couple of weeks later. This was in part due to DB's efficiency standards, serviceable mainline locos do not sit in yards or depots for long as they are not generating revenue. This led to their being no locos to Marshall and prepare trains with, which in turn created delays. 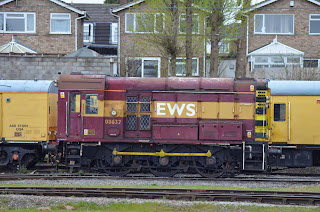 It is a well known fact that the veteran BR design has been on the hit list for the German company for the past few years with a gradual run down of the fleet and the types duties. A serious lack of investment in the fleet over the past few years has inevitably left the fleet tired, stretched and in the case of some examples, due heavy work. This work has not been sanctioned in recent times, another case of railways being run by accountants who seemingly cannot justify the expense of what is seen as a non revenue earning asset. With decisions being made by people working on balance sheets rather than on the ground in the operation, it is no surprise that DB has lost major ground over the past few years, Indeed, in the past couple of days it has emerged that the once great German entity is planning to shed 900 jobs in the UK. The decline in Coal and Steel markets is one of the main reasons the company is giving for it being on its arse but the problem in my opinion runs much deeper. DB has been on a steady decline for a number of years due to seemingly being unable to adapt to change and be innovative. Unlike GBRf, DB haven't gone out of their way to highlight the benefits of using rail over road. Not only have they been unable to attract new customers to Rail, they've lost quite a bit of existing work too.

So what next for the shunting operations of what is technically still Britain largest rail freight operator? Whether they would be looking to hire in a number of shunter's remains to be seen. This way the ground staff (who are left) would be able to operate a familiar locomotive whilst the business would not have to worry about expensive repair or exam costs.
The operator introduced a couple of battery powered shunter's at Toton and Crewe last year however these would not be suitable for use in a busy yard. Indeed the Crewe example is dumped to one side with the staff preferring to use stored examples of Class 08's as the depot pilots. 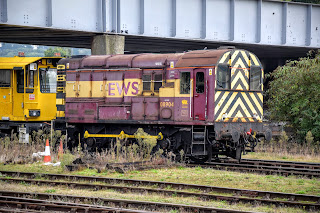 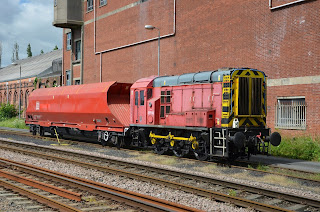 Mainline workings by Shunters are increasingly rare these days but one such trip working that still enjoys the delights of a 'Gronk' is the 8K77 Knottingley/Drax/Milford Wagon moves. Former Warrington Resident 09106 is seen shunting a lone Hopper at Milford West Sidings. 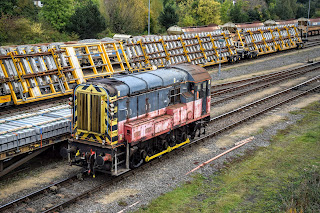 RES liveried 08742 is seen here in Hinksey Yard, Oxfordshire on Thursday 13th October 2016. The loco has just returned from repairs at Didcot after suffering fire damage earlier in the year. It was widely expected that the loco would not be repaired however against all odds it was and also received a C exam at Didcot. After a few weeks bedding in on local shunt duties, the loco ran light the short distance from Didcot to Hinksey under the cover of Darkness in September. Hinksey is a busy base for engineering trains and the Gronk is kept occupied by numerous arrivals. 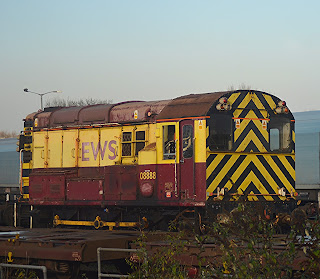 The last operational loco to carry EWS 'More Yellow' livery is 08888. Pictured here in Didcot yard on 29th November 2014 the loco is one of the hardest worked of all the DB fleet having served up and down the country in recent years. After a spell out of traffic whilst undergoing a D Exam at Bescot, the loco was returned to service in early 2016 and was sent to replace the ailing 08623 at Hoo Junction. The loco remains in use today, but was briefly stood down in October awaiting a B exam to be authorized. 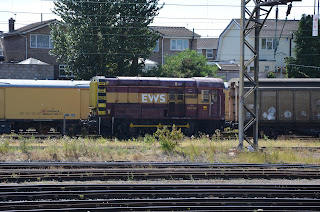 08703 sits on Bescot shed in between duties in August 2016. It had recently arrived from Immingham for a C Exam but was pushed down the queue when 08752 arrived from Tyne Yd for the same treatment. The loco saw use as Bescot pilot seeing 08907 temporarily stood down again, but has now entered the shed for repairs  and is yet to emerge. Will it work for DB again?

In the addition to the above, the following locos are also seeing use despite being 'Stored' 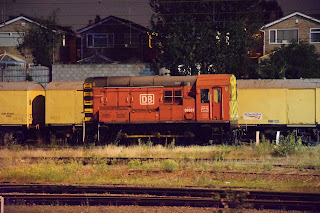 Long term Bescot resident 08907 sits under the floodlights on a cold Octobers night. The Bescot pilot now mainly sees use on shed with mainline locos taking up shunting responsibilities over at the virtual quarry. 08907 was the first of the Class to receive the DB livery back in 2014. 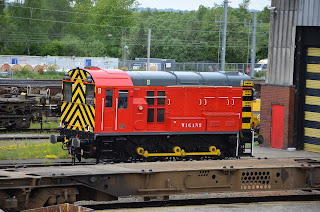 Following a number of years storage at Toton in the compound, 08605 was the surprise replacement for the sold 08877 when it left Wigan in 2015. Once at Wigan, its faded EWS livery was quickly replaced with DB red/grey with 'Wigan 2' stencilled on the side (08877 was of course 'Wigan 1'). These days, Wigan is used as a wagon repair shop and a base for Network Rail MPV units. The loco is pictured sitting outside the shed in May 2016. 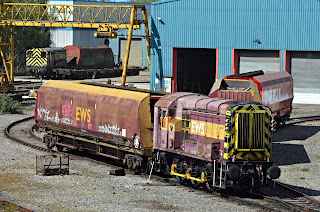 Another location which depends on the use of a dedicated pilot is the busy Axiom Rail wagon works in Stoke. 08633 arrived here in 2015 to replace 08993 which was sold further down the line. Originally the Gronk sat out of use with the staff preferring to use its 'Cut Down' sister, indeed the day 08993 left on a low loader, it was still performing pilot duties as the low loader was on site and set up waiting for it, whilst 08633 sat around.


The full list of locos offered for sale are as below; 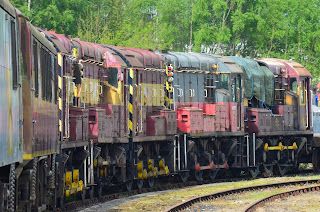 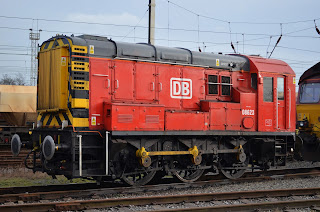