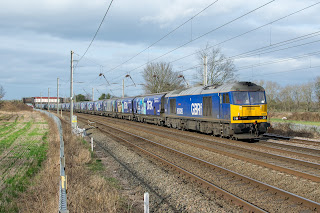 60026 'Helvellyn' passing Winwick this afternoon at head of the 6E10 12:03 Liverpool Biomass Terminal to Drax AES service. The locomotive operated by GBRf is owned by Beacon Rail and it's livery is based on it's owners dark blue with both Beacon and GBRf logos. The locomotive had reentered traffic in late 2021 after being out of use for over a year, due to fire damage suffered whilst working on the same circuit in 2020.
at January 30, 2022 No comments:

Another Gronk lost is former RES 08873 which was a few months shy of it's 61st Birthday. Seen here in better times at Southampton Maritime in November 2016 when the veteran had just been powered up to shunt the terminal whilst on hire to Freightliner. 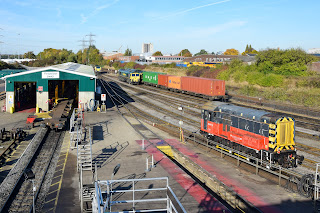 Introduced in November 1960 as D4041 and a product of Darlington works she was put to use in the Sheffield area, spending just short of a decade floating between Darnall and Tinsley etc. A trip to the big smoke in 1969 saw the start of a long association with Finsbury Park. It received its TOPS number of 08873 in 1974. When the depot closed in the autumn of 1983, the loco was reallocated to Bounds Green. Transfer to Stratford came 3 years later but the loco spent most of it's time still at Bounds Green and the duties associated with the depot. Repainted in to Intercity livery, complete with yellow cab roof and Stratford Cockney Sparrow logos in 1987, the loco was displayed at the Bounds Green Open Day. A brief period of store came in 1993 but the loco was later reinstated. Continuing it's tour of London, the loco came under the command of Willesden in late 1993 however had moved up to Crewe Diesel by the spring of 1994. A career with RES followed with a repaint in to the Red/Grey livery and becoming a regular feature in Crewe Station shunting the once busy mail/parcel traffic. 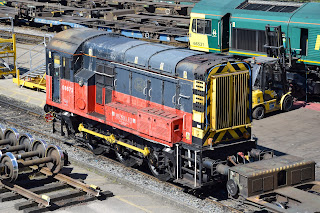 Following the purchase of RES by EWS and having been side-lined at Crewe DMD, the loco was eventually offered for sale and in 1998 became part of the RFS fleet. Resold again, 08873 joined Shunter Hire specialist RT Rail at the turn of the Millennium and spent a good period of time on hire at Crewe Carriage Sidings. Somewhat surprisingly, she was sold on once more in 2005 to Hunslet Engine Company/Andrew Barclay Locomotives. A full overhaul and repaint in to RES with Hunslet branding followed. During it's time with Hunslet it served at a good amount of locations including Trafford Park (for both FLT and Kellogg's traffic), Felixstowe FLT, Round Oak Steel Terminal (West Mids) and Hams Hall. 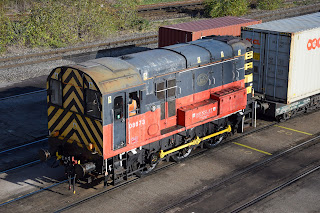 The most significant hire of the loco was by Freightliner whom it spent most of it's time with. This was in part due to the dire availability of Freightliners own 'Gronks' at the time. 2008 was a particularly torrid time with FL's own 08891 having decided to give up the ghost in the early part of the year with engine issues at Maritime and was carted away for assessment/repair. 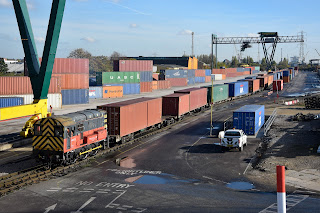 To further add to the woes 08077 and 08575 were involved in a shunting mishap at Maritime in July 2008 which saw 08077 pushed right through the stop block and end up completely off the track. 08575 was mangled in the incident too and both were subsequently side-lined. For 08873, which at the time was working at Felixstowe North FLT, this prolonged it's hire with FL and further cemented it's unofficial position as their 'First Reserve'. 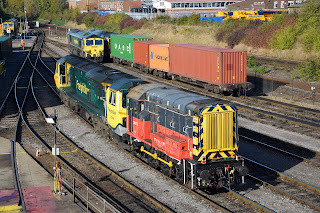 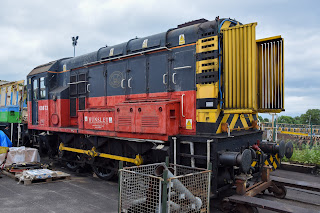 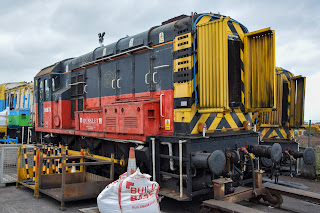 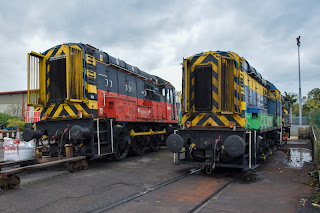 Cover it would continue to provide, mostly at Southampton but also a couple of spells at Hams Hall. In 2017 she left Southampton for the final time, coming off hire and returned to Barton for repairs. The loco never received these repairs and over the next 3.5 years or so the loco was gradually stripped of all reusable parts. In June 2021 the loco was little more than a shell, even it's cab internals had been completely gutted. Late June she was transferred to Beaver Metals at Water Orton who made light work of disposing of this workhorse. 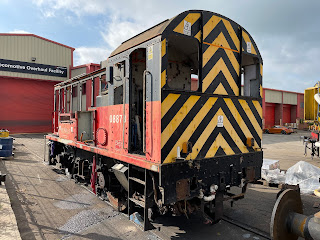 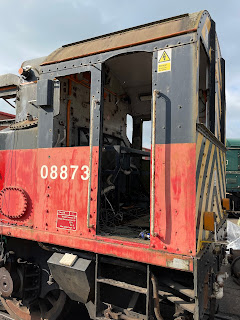 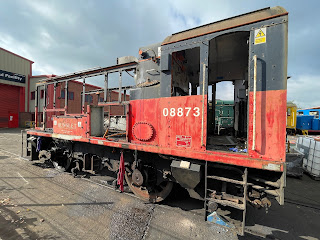 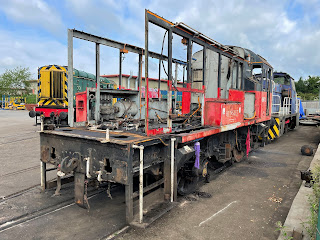 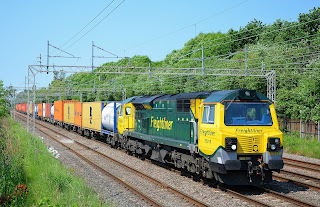 Freightliner, the UK's second largest Railfreight operator, was purchased by Genesee & Wyoming in 2015 who bought a 95% stake in the company. At the time, Freightliner had moved in to the 'Powerhaul' era which had launched with the Class 70 locomotives in 2009. This replaced the companies 'Racing Green' livery which itself was launched with the first Class 57 locomotives in the late 90's. The adoption of the 'Powerhaul' scheme was slow for UK operations with only 35 locomotives receiving it (this including the 20x Class 70's delivered in the livery)

The origins of the livery can be traced back to late 2007 when in the quest for new locomotives, Freightliner launched 'Project Genesis'. This was a collaboration with General Electric and initially had the potential to reach 30 locomotives. In terms of specification, the requirements were similar to existing Type 5 locomotives but with improved technology, increased haulage capability and a hoped 10% reduction in fuel consumption. Built in Erie, Pennsylvania this was the launch of the Class 70 locomotive. In the end only 20 were constructed for Freightliner, of which 19 went on to operate, after 70012 was dropped on delivery sustaining a damaged frame and was ultimately returned to the USA and never replaced.

So with the new locomotives, came a new identity. Still based on it's green/yellow colours, the new livery was essentially a modern take with the addition of a grey swoosh as well as a green band extending on to the cabs. New logos came as well with the 'Freightliner' wording in a thinner typeface - these being placed on either side of the bonnet as well as on all sides and front of the cabs. Fleet numbers were also added to the front in yellow over the grey base on the drivers side. Cab side logos and numbers were in green over the yellow. The first two arriving in the UK during November 2009 were 70001 and 70002. 70003-70006 followed in early December 2009.

The term 'Powerhaul' was the name designated by GE to describe the locomotives but it was also quickly adopted in the UK as the name for the new livery, distinguishing it between the earlier 'Racing Green' scheme. The first non-70 to receive this livery was a Class 86 - a mainstay and ever present in the Freightliner fleet. The honour fell to 86637 which was clinging on to it's FL Grey with Red Triangle livery. Admitted to LNWR at Crewe, the veteran electric got a makeover that was probably the most colourful the class had received at that time. The livery was bright and modern and in my opinion sat well on the 86, making a relatively old locomotive look somewhat less old! 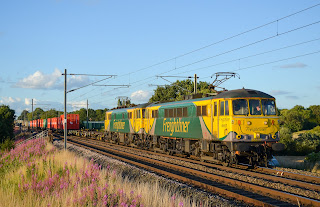 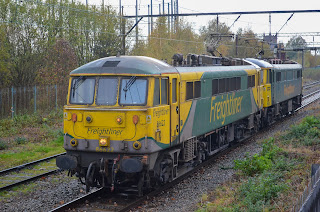 90045 followed in July and became the first Class 90 to carry the scheme. The livery probably sat better on the 90 due to it's more triangular cab shape, and when clean, looked top notch. 90049 was treated in August and the final operational 'Grey' 86, 86622, was treated in October. This would prove to be the final Class 86 painted (so only 2 of the operational fleet of 16) The painting of these 4 electric locomotives there was a gap of approx. 3.5 years before another AC electric was so treated. Indeed, besides the 70's which were still being delivered in to 2012, no further Powerhaul repaints came until 2013. 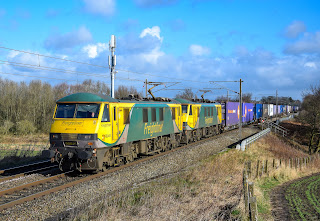 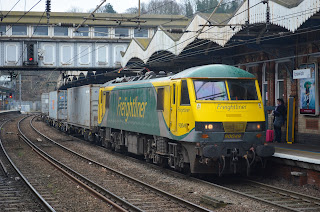 This was when attention finally started to fall to Freightliners most numerous locomotive type, the Class 66. Up first, 66504 was treated at Crewe LNWR and released in April 2013. The initial application was somewhat awkward with the grey swoosh being extended down on to the buffer beams. Over in their Polish division, Freightliner had already applied 'Powerhaul' to several 66's, none of which carried the grey buffer beam. Running in this condition for over a year, by the summer of 2014 the loco had received some attention in which the buffer beam was painted black, giving a better overall finish. 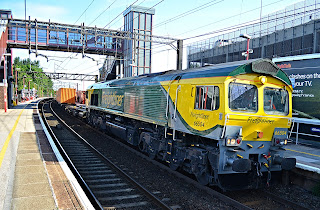 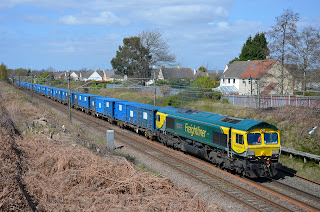 In March 2014 90042, which was under overhaul at Crewe LNWR following fire damage sustained in 2011, received the livery replacing it's FL Grey. 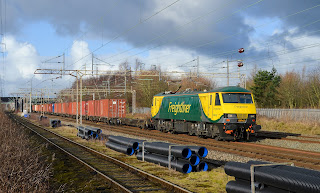 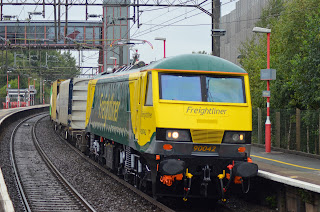 In August 2014 66416, which had been running around in the colours of it's former operator DRS (albeit it with FL logos on the cabs) was released from Crewe LNWR with black buffer beams as standard. A different location for the next repaint, the second ex DRS machine 66414, was sent to Arlington Fleet Services based at Eastleigh works, breaking cover in February 2015. Two months later, 66528 was the next recipient which surprisingly was painted at Brush, Loughborough - this being the only locomotive to be painted in this livery there. 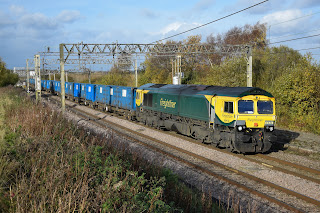 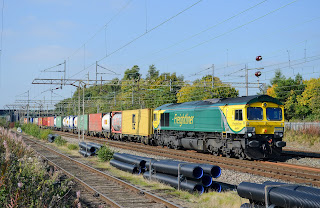 The hardworking yet humble Class 08 shunter were not ignored either, with three of the six 'Gronks' on FL's books receiving the paint brush treatment. 08531 which was receiving a D exam at Wabtec (LH Group) Barton-under-Needwood became the first of the class to receive in May 2015. 08585 which was the next in for exam was outshopped in September 2015 before the final member of the class, 08624 had it applied in October. No Freightliner logos were applied to any of the shunters but the 'Zero Injuries' markings were. 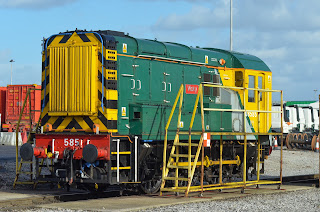 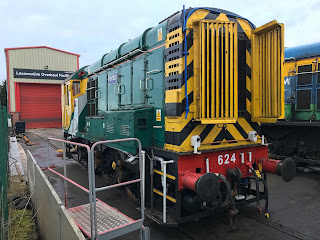 The repaint at Arlington's was obviously impressive enough for Freightliner to send their next two 66's there. 66418 appearing in June 2015 and 66420 in October 2015. With these paintjobs there was a significant change - the additional branding of 'a Genesee & Wyoming company' under the Freightliner logos being the first time the new owners had been displayed on the fleet. 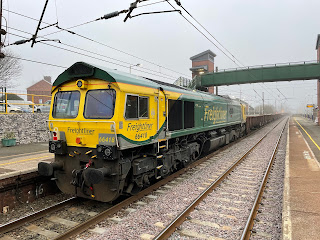 90043 was the next (and final) locomotive to receive this livery. This being so treated at Arriva Traincare/LNWR Crewe. A change in direction was obviously decided upon at some point after 90043 was released in November 2015 with no more full repaints sanctioned. 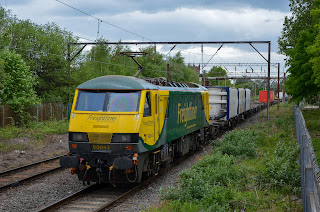 So in summary, the 'Powerhaul' livery was a relatively short lived corporate identity with only approx. 6 years of application* Although all the UK loco's to have received the scheme retain it to this day (including 70012 back over in the USA) 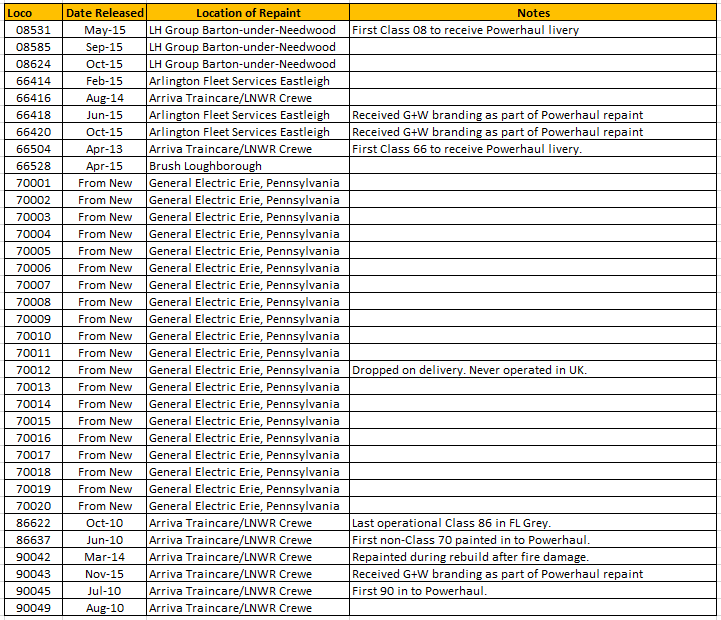 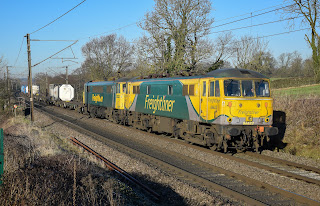