2017 has proved to be a busy year for the humble 08/09 Shunter with plenty of activity. Although the number remaining is nowhere near the amount that was produced, the figure remains fairly static with few being disposed off. This year has seen long term contract changes, location changes and even new shunter duties created. Below is a brief update on whats being going on...

Alstom retain a number of 'Gronks' at their depots along the West Coast Mainline. Locations such as Glasgow Polmadie, Liverpool Edge Hill, Manchester Longsight, Wolverhampton Oxley and London Wembley all started the year with a Shunter requirement. All of Alstom's Gronks have received attention in recent times, with money spent on them to keep them going for years to come. Most of this work was undertaken at Arlington Fleet Services, Eastleigh Works and included a full overhaul and repaint. Alstom's locos carried a variety of liveries prior to overhaul including BR Express Parcels Blue (08721) BR Black (08454) BR Green (08696) and Virgin Trains Red/Black (08611). 08954 was overhauled at Longsight depot and repainted blue from Transrail Railfreight grey livery.

The current disposition of Alstom's Gronks is as below...

The list above no longer includes Liverpool Edge Hill. In truth, for the past couple of years the 08 was little more than a spare part on the site, often only being moved to keep it in serviceable condition. In June 2017, Edge Hills final pilot 08454 was road transferred the short distance to the new Rail Technology Centre in Widnes. The new site has a contract to repaint all Virgin Pendolinos which are now due. Rather than receiving Virgin Colours, the Pendos will initially receive a neutral scheme prior to the awarding of the West Coast franchise. The Pendolinos are split in to 3 parts and placed on to the 3 roads of the shed. Surprisingly in August, 08454 was joined by 08721 from Longsight and it appears that for the foreseeable future the site will have 2 pilots.


Manchester Longsight is down to 1 pilot, with 08451, itself not long brought down from Polmadie, holding the fort. It is expected that this will be joined by 08790 once it is released from Eastleigh.

08790 and 08887 are both on repairs at Arlingtons. 08790 has received some attention to its radiator as well as its traction motors. The loco is the only of the fleet at the moment to have a slight deviation to its livery, this being a black bonnet roof in addition to BR Blue.
08887 has been onsite at Eastleigh since Mid 2016 when it arrived for generator repairs.

Freightliner continue to deploy 08's at their container terminals up and down the country. The Gronks are on long term hire from Porterbrook and receive repairs at the LH Group (Wabtec) Barton Under Needwood as and when required.

A recent shuffling of the fleet has seen 08530 come off long term repairs and transferred to Southampton Maritime via Leeds Midland Road for tyre turning. This has joined 08624 'Rambo' ensuring there is a pilot for the servicing shed and a pilot for the container terminal.
08785 has been tripped to LH Group for some well earned TLC having put in a tremendous performance at Maritime during which all of the other Freightliner Gronks had visited LH group due to failure and repairs at some point.

Long term stored 08575 and 08891 have been shifted the short distance from LH group to the Nemesis Rail site in Burton. It is unclear at the moment why this is, whether they have been sold on or for further storage.

08575 was stood down after an incident also involving 08077 at Southampton Maritime which saw both Gronks go through a set of Buffer stops. 08077 has since been scrapped.

GBRf own a small number of their own Gronks but in more recent times have hired in from their supplier of choice HN Rail. The GBRf/HN Rail combination has seen Gronks used at Cardiff Celsa, Garston Car Terminal, Immingham Docks.

A rumoured new contract is to see 09106/09201 installed with lights and mainline equipment for the Doncaster area.... time will tell!

The requirement at Garston has been upped from 1 shunter to 2, with 08818 (fresh from overhaul) joining 08507 at the South Liverpool complex. Whether this remains a permanent 2 loco gig remains to be seen. 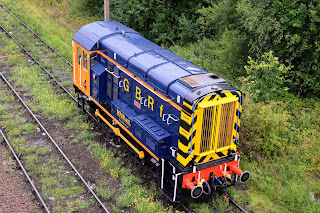 08527 is used a Immingham Docks on a contract between GBRf and Puma Energy.

Still the largest gig between the pair is the Celsa Steel Plant in Cardiff. Requiring at least 4 Gronks at any one time, currently the location is home to 08389 (Celsa 1) 08924 (Celsa 2) 08630 (Celsa 3) and non remote control 08904. The first 3 locos have been fitted with remote control equipment, with 08904 on site at the moment to act as the spare loco. This contract was gained from DB after they pulled out in 2010/2011 and had been run down by EWS/DB in the latter years. This was mainly down to a lack of local dedicated maintenance facilities which in turn busted many a Gronk, often leaving the site with 1 or no serviceable shunters. GB and HN Rail have transformed this, introducing overhauled locomotives and state of the art remote control technology, which unlike the EWS/DB variant, actually works reliably.

08632 was moved to the Tata Steel Trostre site in Llanelli for hire via Runtech limited. This proved to be short lived however with RSS pulling out due to contractual issues. The loco has been returned to Wishaw where it is receiving some further attention prior to being released to Leeds Neville Hill. This will in turn allow 08405 to be moved to Wishaw for a repaint and some attention of its own.

08480 and 08683 have in the past month taken over pilot duties at Norwich Crown Point from RMS locotech.


At Bristol 08516 is kept busy as the sole occupant of the former EWS Mail depot.

At Crewe there is sufficient work for two Gronks with 08868 and 09204 employed here. Both carry Arriva Traincare Livery and apart from the plain yellow ends, look the business!
Eastleigh is home to 3 Class 08's at present with 08810 the depot pilot, 08442 in long term store and 08735 languishing on site despite being offered for sale last year by DB. It is unknown if it was sold and who its new owner may be.