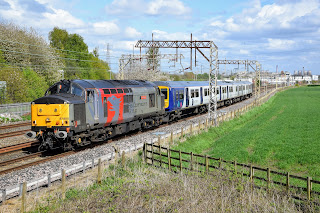 37800 returned to it's Merseyside, the County of its birthplace, on Thursday 27th April transferring a Class 319 EMU (319431) from Wolverton works to Allerton Depot. The EMU has been refurbished for use with Northern (by Arriva) and was tripped to the South Liverpool depot for final preparations for a return to service. The working was the 5N36 10:10 Wolverton to Allerton and departed north Buckinghamshire 2 hours late. At the time the image was taken near journeys end at Halewood, the service was running 125 mins late - not helped by a long looping at Winsford to allow 3x Passenger services and 1x Freight services passed.


37800 was introduced as D6843 in May 1963 from Vulcan Foundry, Newton-Le-Willows. Following the introduction of the TOPS numbering system it gained the new identity of 37143. It carried this number until September 1986 when it was renumbered to 37800 and named 'Glo Cymru'. During its EWS career it was exported to mainland Europe twice, first to France on hire to SNCF in 1999, returning to the UK just under 12 months later, and secondly to Spain in 2001 on hire to GIF. Both assignments were for construction projects and the locomotive would remain in Spain for 10 years. Following the loco's arrival back in the UK in 2012 it was sold by DB Schenker to EMR Kingsbury for scrapping. All was not lost though and it eventually purchased for further use by Europhoenix. A full overhaul followed and a repaint in to the new owners attractive livery scheme. It has gained the additional branding of 'Rail Operations Group' who have hired the tractor on a long term deal as well as several other Class 37's from Europhoenix. In January 2018 the locomotive was named 'Cassiopeia' whilst undergoing maintenance at it's Leicester base. Cassiopeia is a constellation in the northern sky, named after the vain queen Cassiopeia in Greek mythology, who boasted about her unrivalled beauty.
at April 28, 2018 No comments:

With the introduction of Class 68's and new coaching stock manufactured by CAF penned in for the Autumn, attention has now turned to driver and guard training. A number of test runs of Class 68's have occurred since Autumn 2017 mainly focused on the Crewe-Preston/Carlisle corridor.

On Wednesday 18th April a number of runs were operated between Crewe Carriage Sidings and Wavertree Junction (Liverpool) utilizing MK3 coaches from the former 'WB64' Pretendolino stock last in use with Abellio Greater Anglia. A Class 68 locomotive was placed at either end, 68027 on the Liverpool end and 68022 'Resolution' at the Crewe end. Testing continued for the remainder of the week working several trips back and forth each day.


The plan is for 2 current Class 185 diagrams to go over to 68 haulage from the May timetable change using MK3 coaches, both on the Liverpool/Scarborough turns. These will be top n tailed with the loco hauled sets initially based at Crewe Carriage sidings. Facilities at both Liverpool Edge Hill and Manchester Longsight are being enhanced to house the new stock in the near future. The May start date is dependent on enough drivers and guards being suitably trained up in time.

There are currently 2 Class 68's over in the Czech Republic being tested with the new CAF MK5a stock, these being 68019 and 68021. These locomotives currently carry Trans-Pennine Express livery after vinyls were applied at Crewe Gresty Bridge in 2017.