If you have a spare 5 mins please feel free to browse over 500 images of the BR Standard Diesel Electric Shunter design. 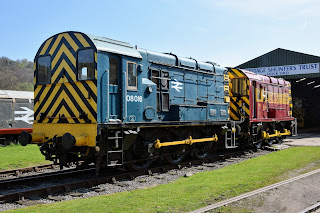 
Allerton TMD in South Liverpool was always considered a Shunter specialist site. Often having dozens on site at any one time. Indeed visits in the 1980's and 1990's would guarantee large numbers of Class 08 (and to a lesser extent Class 09) being on the depot in varying states. Under BR control, Allerton serviced the requirements for the Liverpool area for freight and station pilot duties. The sphere of operation even extended in to Cheshire with Allerton Gronks being deployed to locations such as Ditton, Runcorn and Widnes.

By the time sectorisation came around, large numbers of British Railways Standard Diesel Electric Shunter were still in existence, although their duties had already started to dwindle down in number. RFD inherited Allerton and continued to invest in the Shunter fleet. Eventually,  RFD was purchased by EWS, subsequently the final part of BR to be sold off. EWS continued to concentrate Shunter repair work for the North on Allerton. With the recoding of locomotive Pools, the EWS Shunter fleet for the North West was allocated 'on paper' to Allerton. Pool code WSNW was born. In theory what this meant was that Allerton was the home base of the fleet, but Shunters out based at Carlisle or Crewe for example would still see basic maintenance undertaken locally, with visits 'Home' only for major exams/repairs. Rail Express Magazine kindly provided a spotlight on the various EWS Shunter pools in 2001 and the WSNW pool in particular in their August 2001 issue. Please see below the dispensation of the Allerton fleet in July 2001 updated with todays state of play.