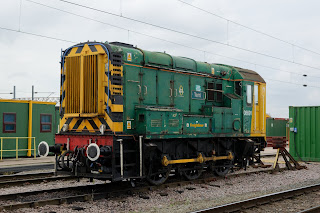 Crewe Basford Hall welcomed the return of a Gronk back in August when 08691 'Terri' arrived from the Port of Felixstowe. The loco was last at Basford Hall circa 2002 when it wore a plain grey livery.

The loco will mark 60 years since delivery at the end of this month having started life back in October 1959 as D3858, as a product of Horwich works. The loco was delivered to Walton, Liverpool and would remain in Liverpool for the first decade of it's career with spells at Edge Hill, Speke and Allerton. Staying in the North West the loco was allocated to Wigan Springs Branch in 1970, had a brief return to Allerton a year later, before once again becoming a Springs Branch engine until being sent to store in 1984. A call to Swindon followed for overhaul and upon release in late 1984 headed to York.

It's probably best remembered for being the Sheffield Station pilot whilst being allocated to Tinsley.
Like most of Tinsley's fleet at the time the locomotive received an unofficial name as well as livery embellishments. In this case the name 'Escafeld' was painted on in 1987 and a light grey roof applied to it's BR Blue livery. The loco later received BR Green with grey roof and cast BR Arrows.

Relocation from Tinsley came in 1994 with the loco once again allocated to Allerton. Time was spent in the Crewe area but by 1997 it was laid up at Crewe Diesel. Repairs followed and the now nearly 40 year old Gronk began it's Freightliner career with a spell at Trafford Park FLT in 1998.

A full overhaul came in 2003 at Doncaster works with the loco outshopped in Freightliner Green/Yellow which it carries to this day. During it's FL career it has served at Felixstowe FLT, Tilbury FLT, Trafford Park FLT and Southampton Maritime FLT and once again Crewe Basford Hall.
The name 'Terri' is inspired by an Ipswich girl who at 6 years of age received significant burns in a house fire. Terri named the locomotive herself at the Port of Felixstowe in 2003.

It is believed that it will be joined shortly by another Class 08 in the form of 08891 currently being repaired at Nemesis Burton Rail. The one time Garston FLT pilot having not worked for FL for over a decade after being laid up at Southampton in 2008. It was removed to the LH Group, Barton-under-Needwood the same year for repairs but has ended up donating a lot of parts to other members of the fleet. Removal to Burton came in 2017 along with fellow spares donor 08575. 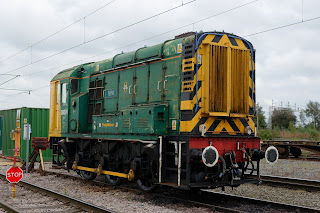