Formed in the mid 1980's, Goodmans yard is home to Moveright International, specialists in road transport of a variety of things, loco's included. As well as being home to their fleet of trailers, the site has a workshop which is used to repair and overhaul locomotives through their sister company, Railway Support Services.

I visited the site, nr Sutton Coldfield on Monday 25/01/2016 and was kindly granted access to take some photos of the locomotives on site. The site is littered with Class 08 and 09 shunter's in varying states. 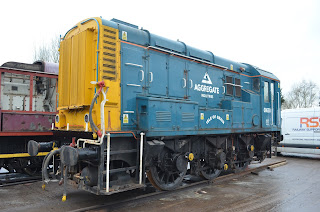 Owned by Mendip Rail, and a long term resident of the Isle of Grain, 08650 is on site for repairs to it's traction motors. Seen here on a short stretch of rail, the loco is missing it's Con Rod's. 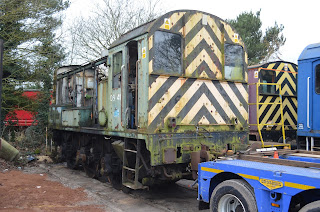 Owned by Traditional Traction, source of spares 08411 is heavily stripped at the rear of the yard. Purchased from EWS in 2007, the loco had been stored at Allerton for a few years. At one point the loco was earmarked for overhaul but now plans appear to have changed, especially since the further purchase of 08580 and 08709 from DB Schenker. 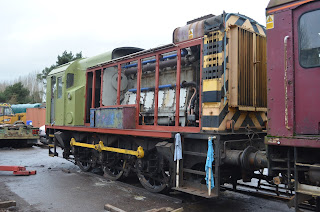 Seen under repair is Traditional Traction's 08511. Formerly carrying EWS maroon and gold, the rub down process has exposed BR Blue on the battery box. Clearly with work advanced well on the cab, the loco should be released wearing the new RSS livery. 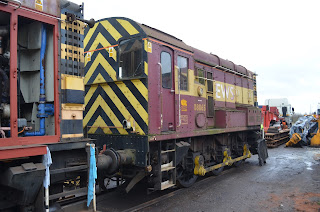 EWS liveried 08865 was also sold by DB Schenker recently, but to Harry Needle rather than Traditional Traction. With space at Barrow Hill currently in short supply, the loco is to be stored at Wishaw for the foreseeable future. Largely complete, the loco was stored after having an exam refused a couple of years back. 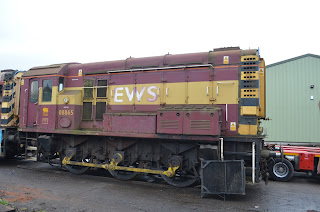 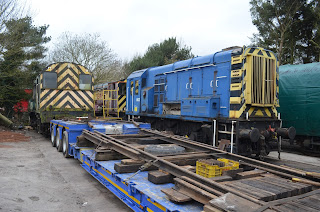 08411, 08846 and 08995 are pictured at the rear of the yard. Blue liveried 08846, which carries the number 003, is owned by Bombardier and is on site for repairs. 'Cut down' 08995 is stored and will shortly be restored prior to beginning it's life as a preserved locomotive on the Shillingstone Railway Project. 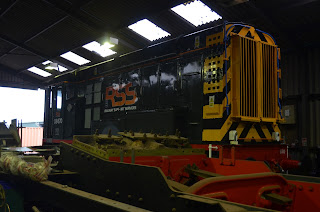 Inside the shed, 08670 was having the finishing touches put to its new RSS livery. With a grey body, complimented by a red sole bar and black roof, complete with RSS branding, the livery suits the vintage design very well indeed. 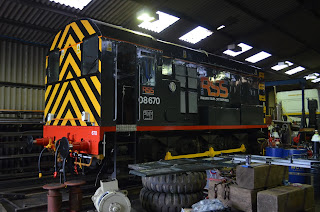 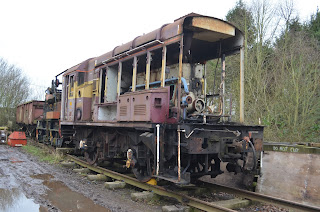 Having only arrived from Crewe EMD a few days earlier, 08593 is a recent purchase from DB Schenker. Despite it looking worse for wear, with it's radiator end and body side doors missing, as well as the middle wheel set, the early indications are that this loco will eventually be repaired. Time will tell on this one.. 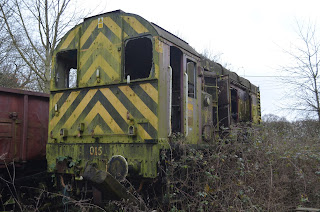 With the nettle bushes growing around it, long forgotten 09015 is dumped at the back of the yard. Carrying EWS livery, colonised by the surrounding vegetation, the future does not seem so bright for this one. 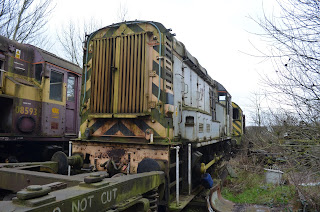 Stored in front of 09015 is 08460 which carries a non standard light grey livery. The battery boxes  contain branding 'TLF South East' and also crudely scribbled on is 'Dee Marsh Babe', inherited during it's time at said location. Last seen by myself whilst the loco was stored on the Allerton scrap line in the mid noughties, the loco returned to service with Traditional Traction after being offered for sale by EWS. The loco saw use on various hire contracts but chronic unreliability has brought it extended time on the side-lines. Whether the loco moves again under its own power remains to be seen.. 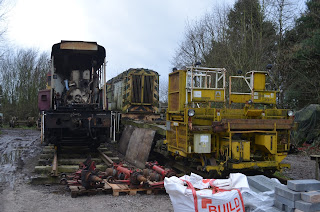 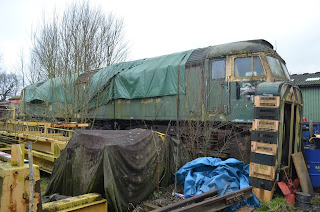 Also on site is 47484, the former 'Isambard Kingdom Brunel' still carrying the remnants of GWR green. Once owned by DRS, the loco is a long term resident of the site. 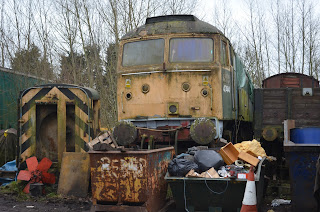 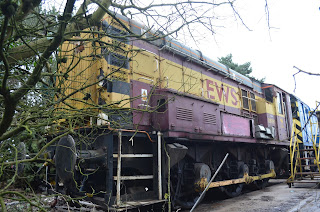 'Cut down' 08995 is stored here on behalf of its new owners and will shortly be restored prior to beginning it's life as a preserved locomotive on the Shillingstone Railway Project. 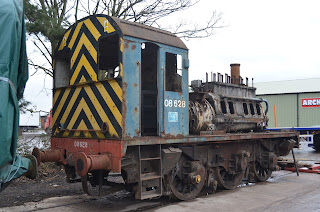 A fairly recent arrival at the site is 08628, or at least the remains of it, from the Ribble Steam Railway. Bought as a source of spares, most notably its wheel sets, the loco makes for a sorry sight.
My thanks and sincere gratitude go the Goodman's for allowing me on site to look and photo the locomotives.