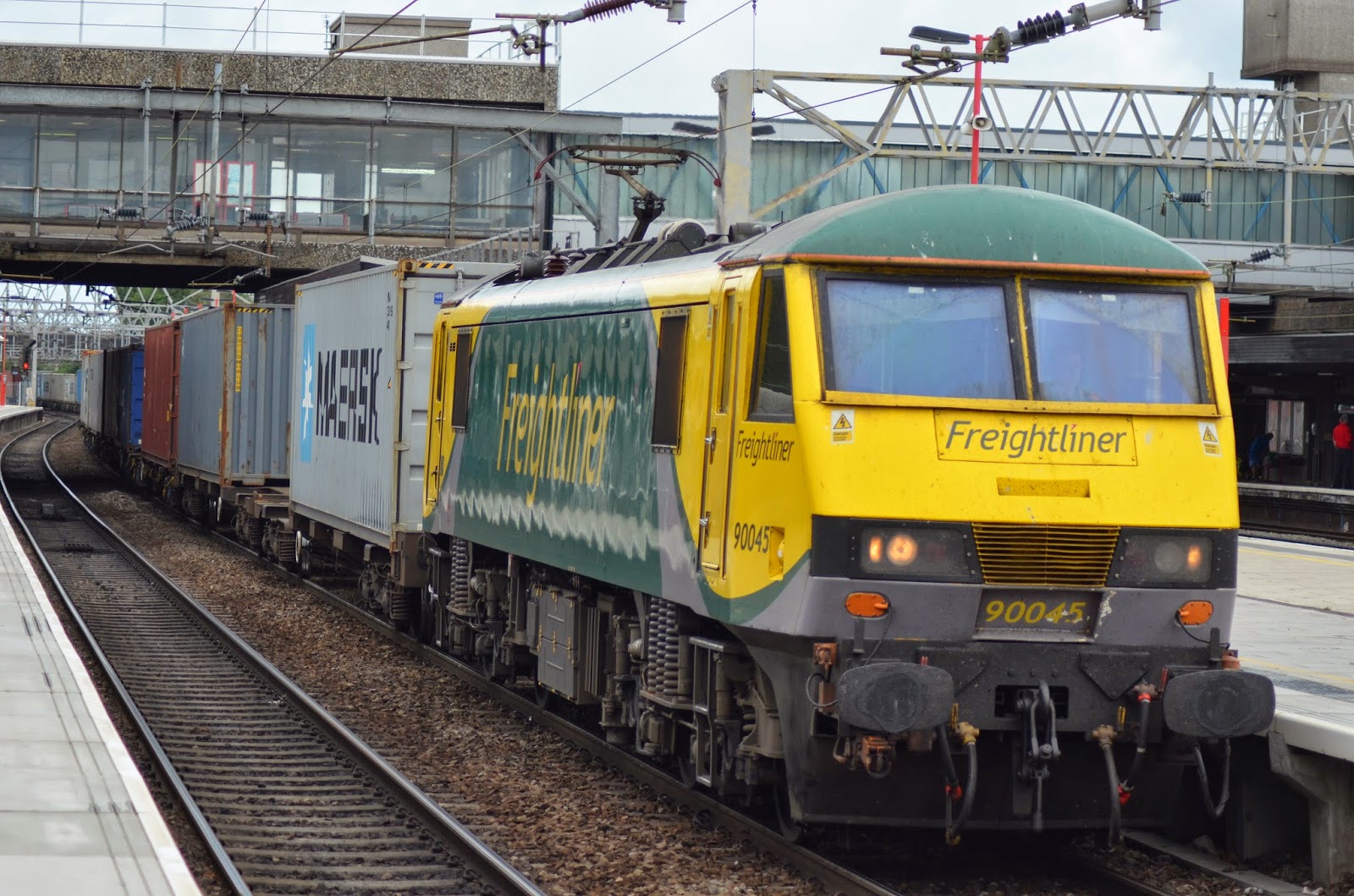 This morning I awoke to the news that as part of Bachmann's 2014/15 catalogue, the Barwell based firm are to produce a Class 90 electric locomotive. This is a significant announcement to me personally, as a fan of Class 90's and electric locomotives in general. The last electric locomotive produced by Bachmann was the Class 85 'AL5' which was released some 3 years ago now. In general this locomotive sold well, although it does depend on who you speak to. Indeed the electric blue version sold out not long after release, and the TOPS BR Blue version has been a steady seller without any significant discount from retailers.

The problem with electric locomotives is generally seen as being the lack of a good overhead line/catenary system. Indeed it does look somewhat silly to have a locomotive with a pantograph running with no wires (unless it's a Class 92!). With the way the hobby has gone in the past decade or so, with the improved quality and specifications of models it is perhaps a glaring omission. But then again, perhaps a bigger question, have we been spoilt in the past few years? With expectations ever increasing, are we just too demanding? Indeed working lights, etched parts, opening cab doors have all been well received, and generally now are to be seen as the 'standard' or bare minimum expected from new releases - but they have to come at a price. Ever increasing RRP's and production delays, not just down to the higher specifications but the ever increasing problems in China. Are the older models that bad?

To answer this question, I refer to the Hornby Model Railways Class 86 and 90 models. Now the tooling of these models are well over 20 years old, but how do they fare up today? Well let's start with the 86. Generally the shape of the 86 is well executed, it sure looks like an 86! Areas that don't scrub up so well are the pantograph and the crude painting of details on the front ends such as lights and cables. In the case of the Pantograph, it is operational so the emphasis when designing would have been something that worked as well as looked passable. It's shown up however, when placed next to a Bachmann Class 85 and it's fine detailed pantograph.
The 90 is a similar story with the same pantograph and a generally good overall shape. The thing we have to remember is the age of the tooling, expectations and technology were much different 20 years ago. These models can be picked up quite cheaply on the second hand market and an advantage of the age of these models is the vast amount of liveries available. Hornby have re-motored both models in recent years, including a DCC socket and a NEM coupling socket to bring them closer to today's standards. The price of these models now is also reasonable when bought new, and reflects their age and specifications. I've recently added a pair of Hornby 86's (soon to be joined by another) and a Hornby 90 to my fleet. The models are what I would consider fine and passable representations. They certainly wont be getting retired when the Bachmann 90 eventually is released. 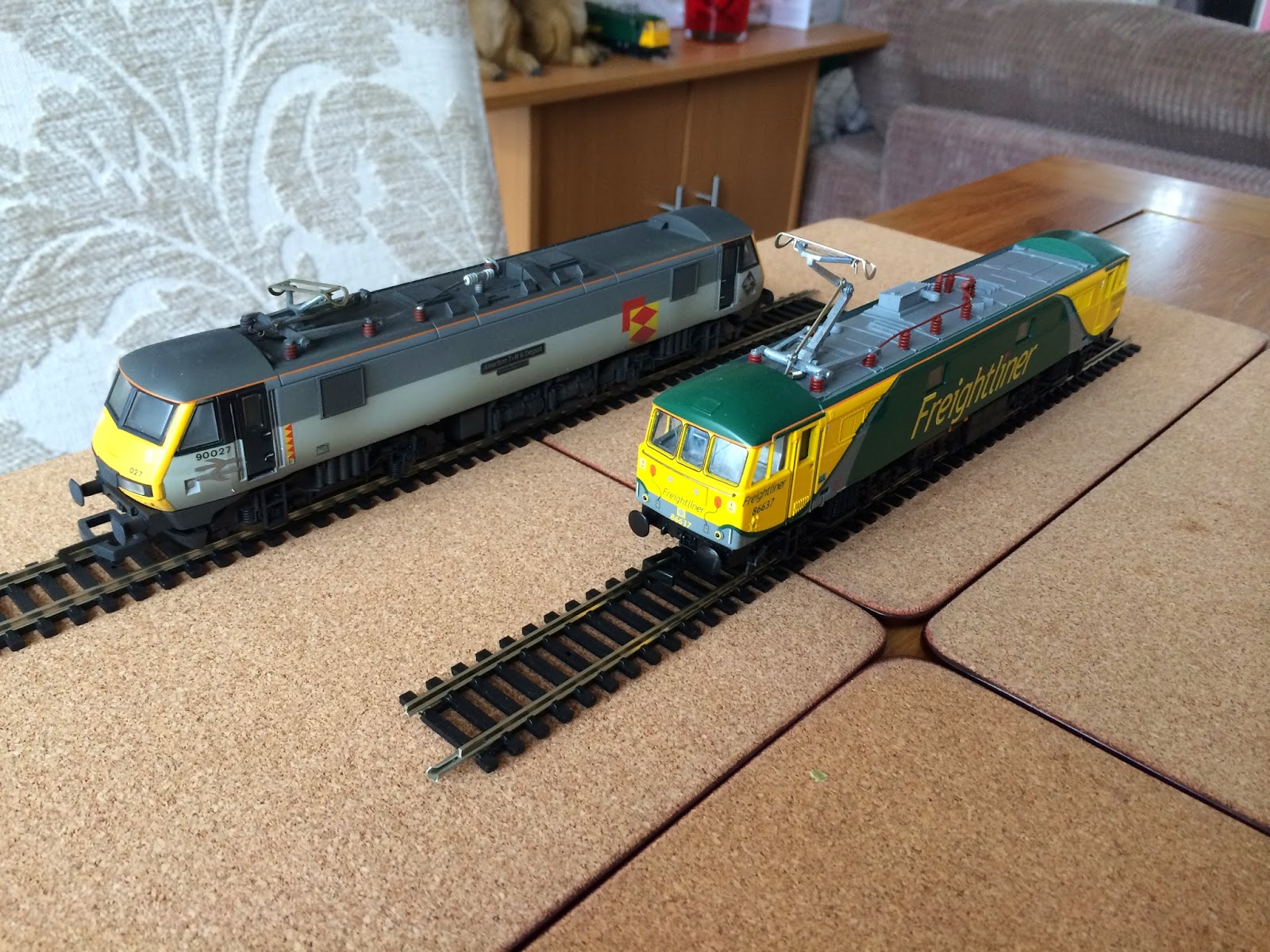 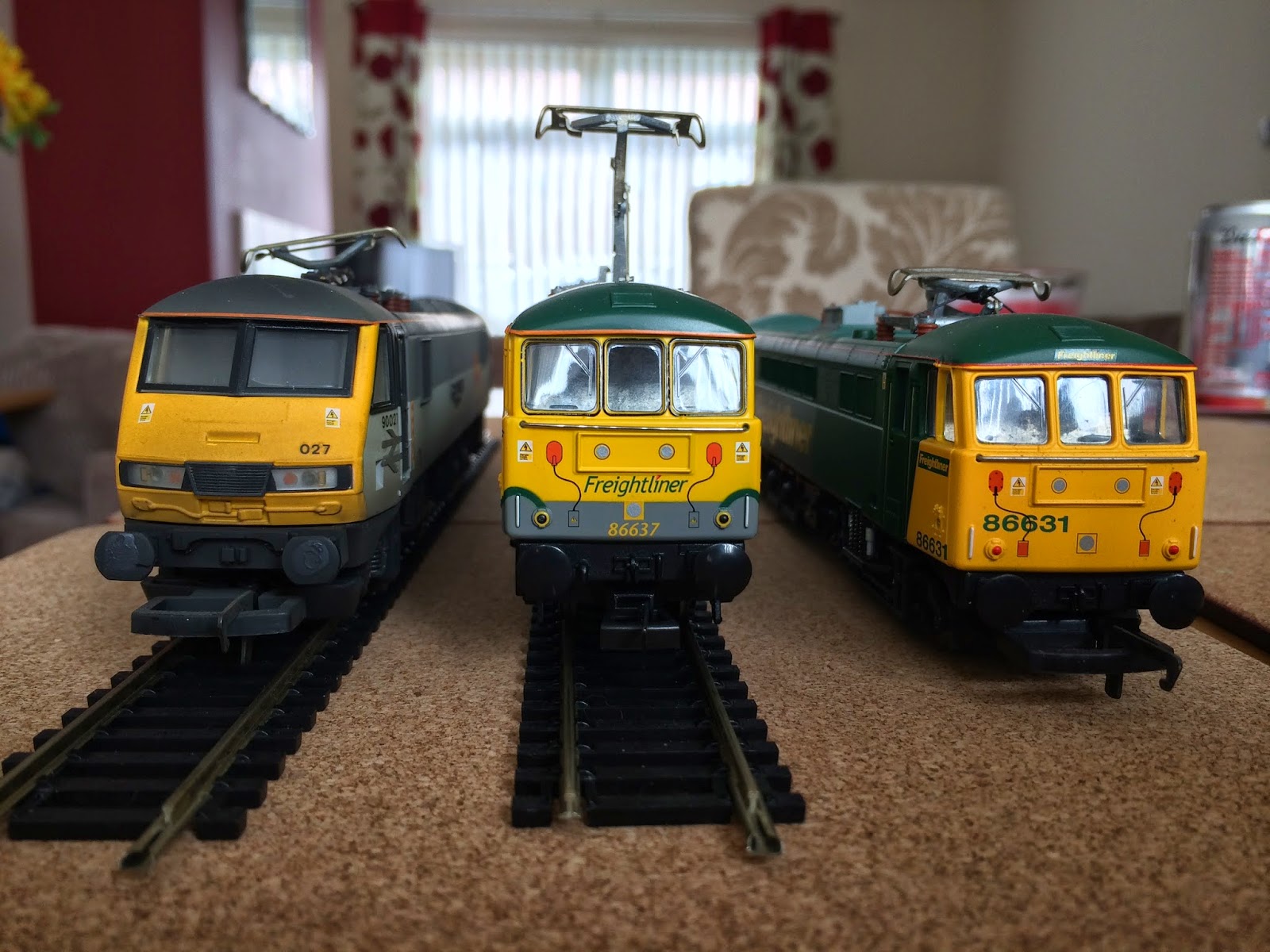 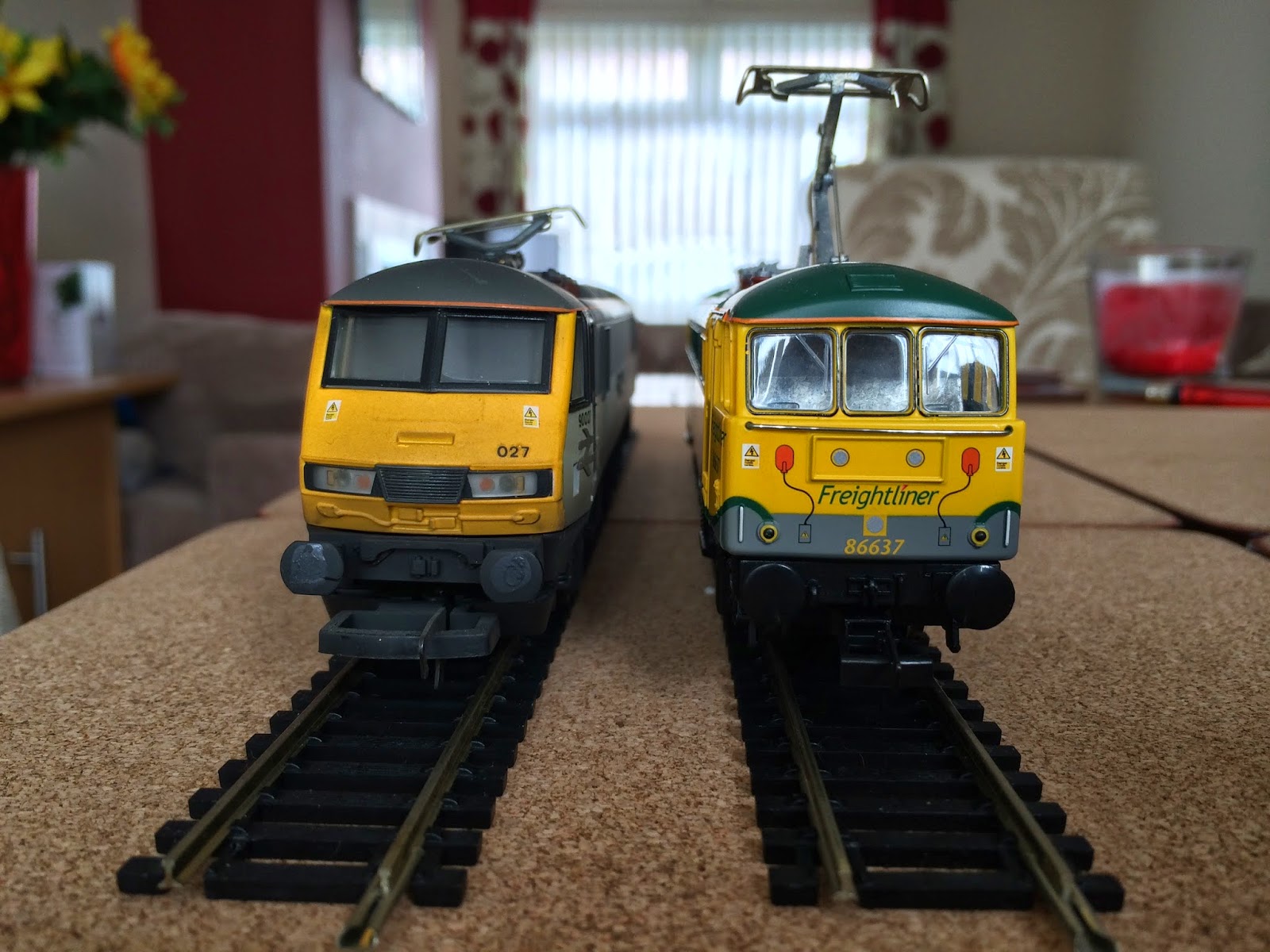 The Heljan 86 is another electric model released in recent years. Announced back in 2008, it offered promise of being the 'Definitive' Class 86. When released it received mixed reviews. My own opinion is that it is a good looking model of an 86. There are some people who say the Hornby model is still better, but this is simply not true. While there are undoubtedly some errors with the model, the model is finely detailed and oozes quality. A good spec from new with DCC and working lights, and a detailed underframe the model is already ahead. Some people have criticized the cab windows, which they are fully entitled to do. This for me, is not a problem with the model, it looks like an 86 to me and that's the main thing. The pantograph is the issue with this model, being horribly oversized and thus taking away from the overall good feel to the model. However unlikely it is, I'm sure that with a half decent re-designed pantograph the 86 could make money for Heljan. I can dream anyway....

So the subject of the new Bachmann model is the British Rail Class 90. A truly mixed traffic locomotive, a 90 is as at home at the head of a train of car carriers as it is a top a rake of Mark 3 coaches. I've always liked the Class 90's, perhaps its because they were being built as I was being born. I'm 27 years old this year meaning that the oldest example of 90 will also be. 50 locomotives were built, and 50 locomotives remain today, although many are stored. DB Schenker is the largest operator of 90's with 25 on it's books, Abellio Greater Anglia with 15, and Freightliner 10.
Growing up in South Liverpool, I've been subject to West Coast 90's all my life, through Intercity West Coast/Virgin, RFD/EWS at Allerton and the Garston FLT which today see's daily 90 action. My main interest at the moment is around the Freightliner operations involving the Class 90 and also 86 electrics.
So producing a 90 seems a smart move for Bachmann. Seen all over the country 'Under the wires' (and sometimes with no wires - 90039 Llandudno Junction in 2005 anyone?). There are plenty of liveries to choose from from a nearly 30 year career.

Coats of many colours 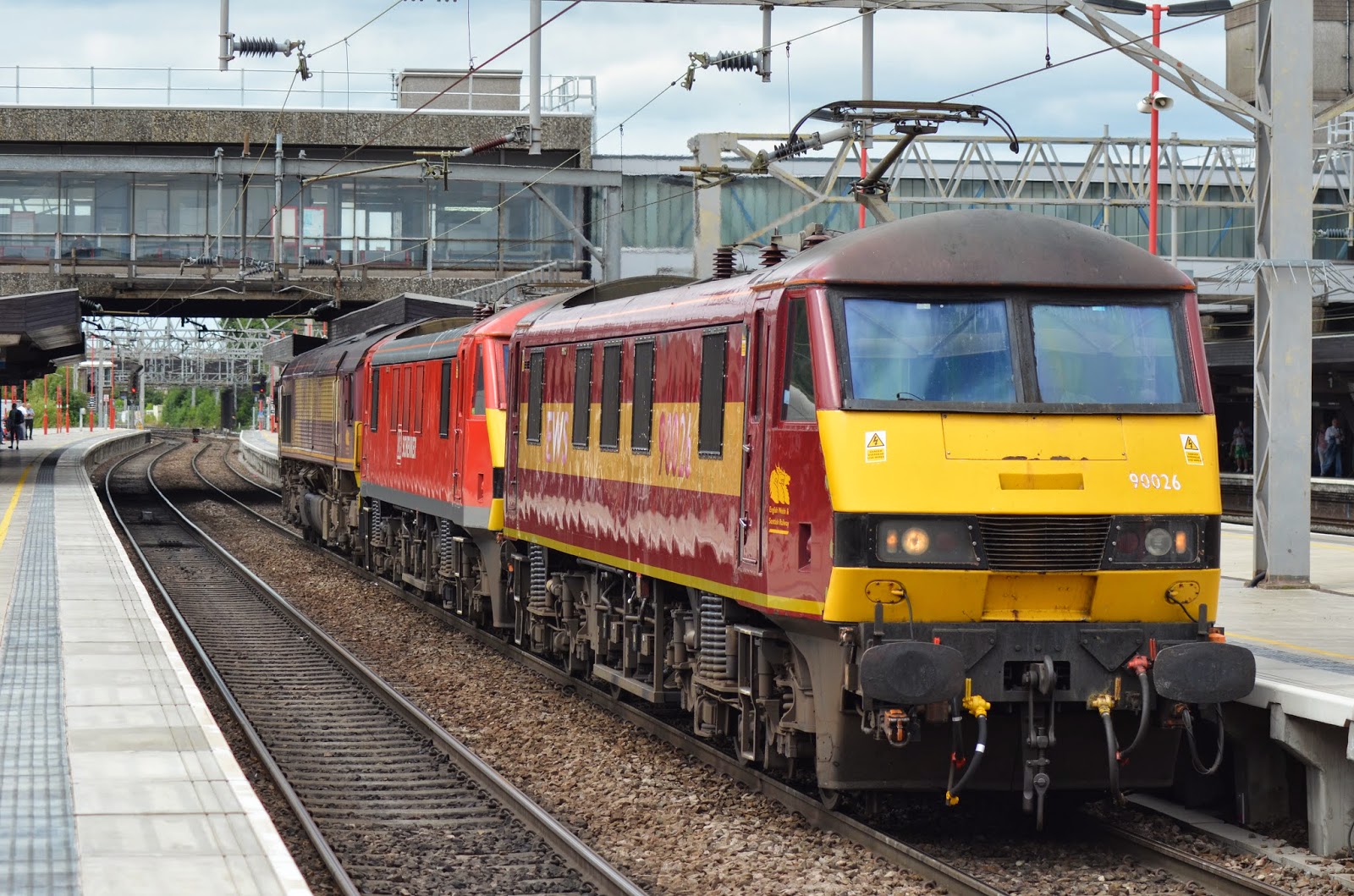 I truly hope that the 90 turns out to be a successful model for Bachmann. I believe it will be, and the first three liveries to be produced are,

Three good choices in my opinion, although I perhaps would have gone with either 90045/9 for the Powerhaul one seeing as 90042 has only just this week been released to normal traffic from LNWR in this livery.
On my own personal wishlist, in the future I hope to see releases in DB Schenker 'Traffic Red', Freightliner original Green/Yellow, EWS Maroon/Gold and RES (a simple classic that suited the profile of the 90's).
I will most likely create a Freighliner grey loco from the RFD offering but one must not get too carried away at this early stage! 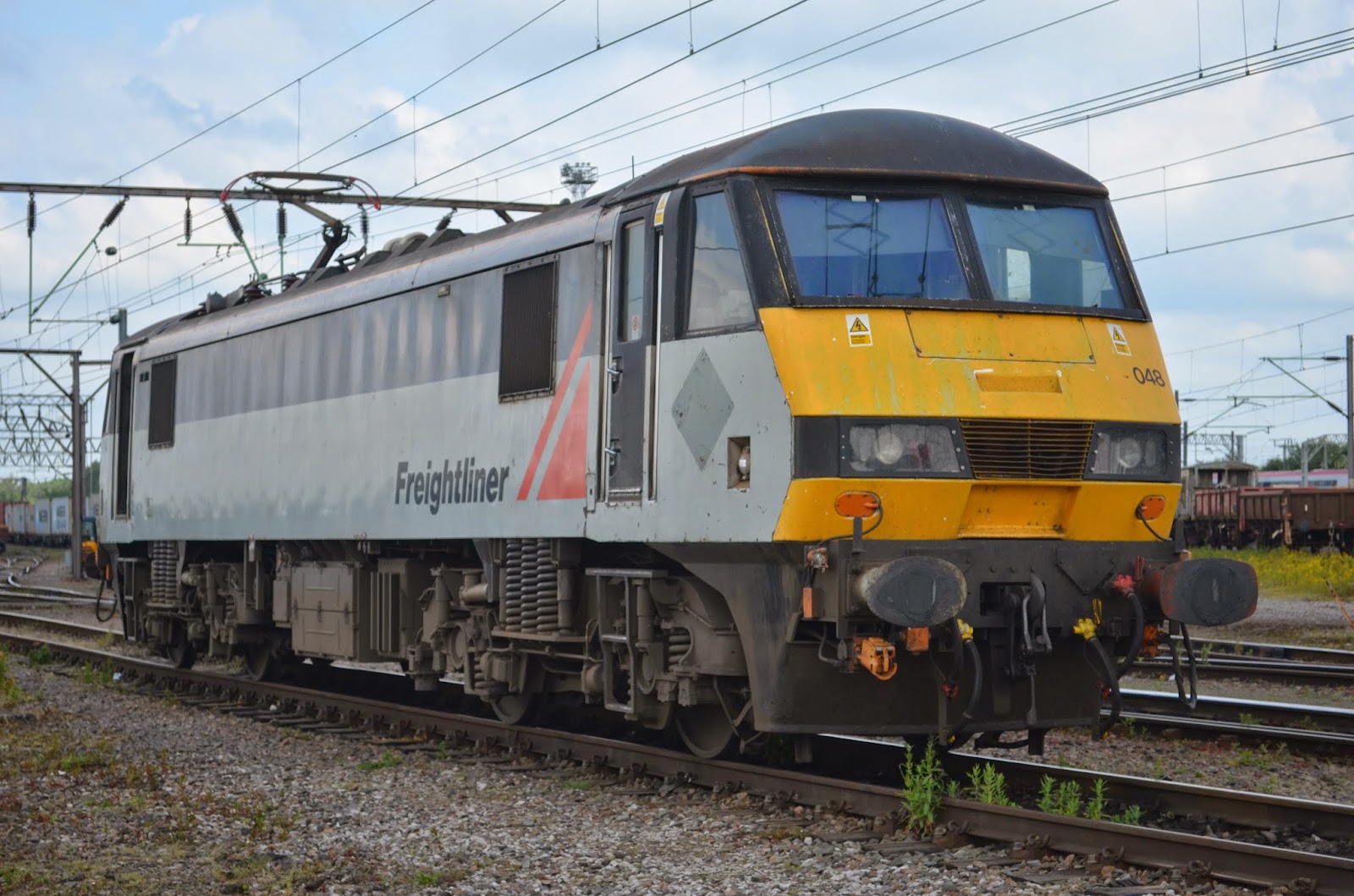 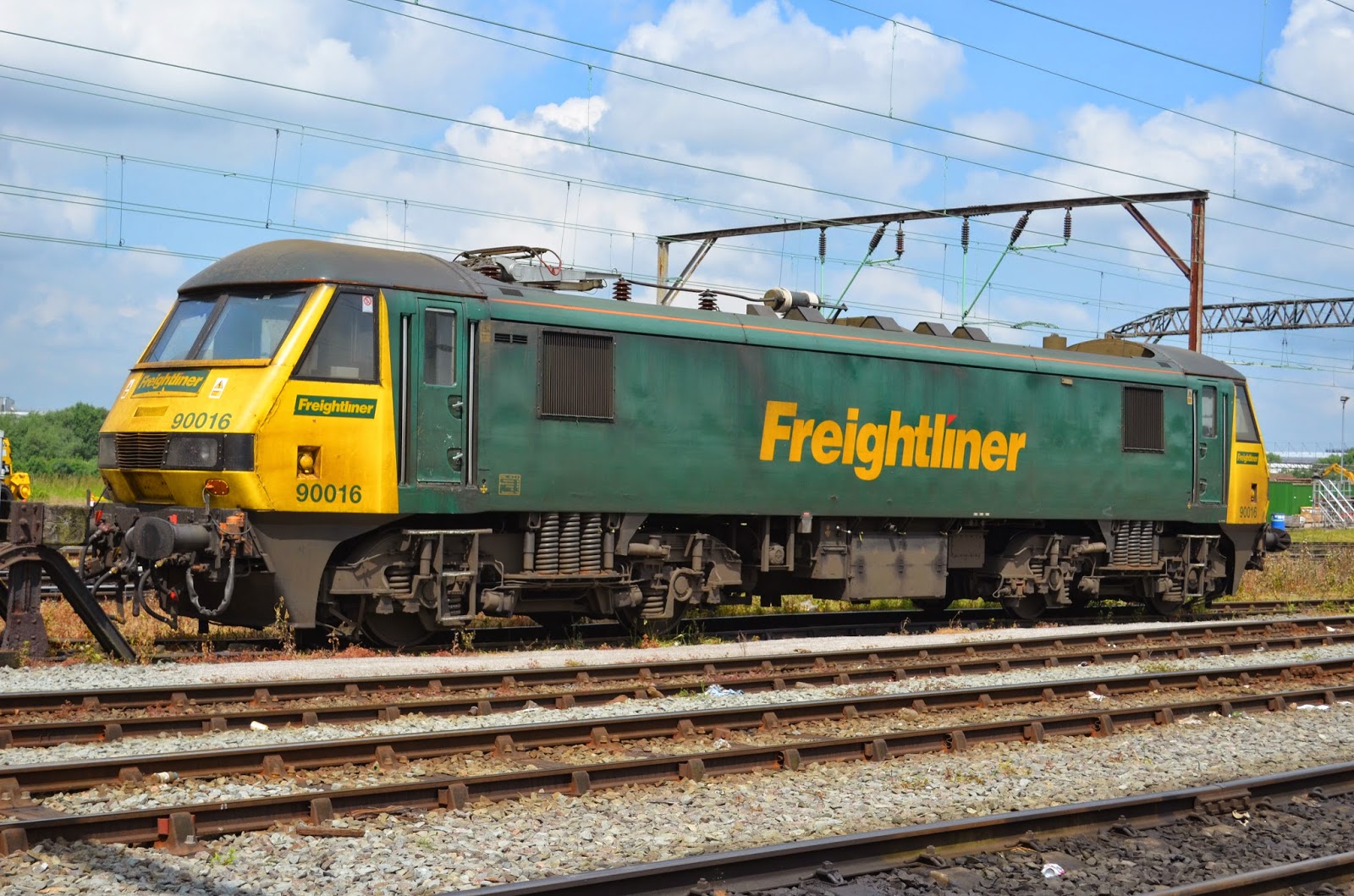 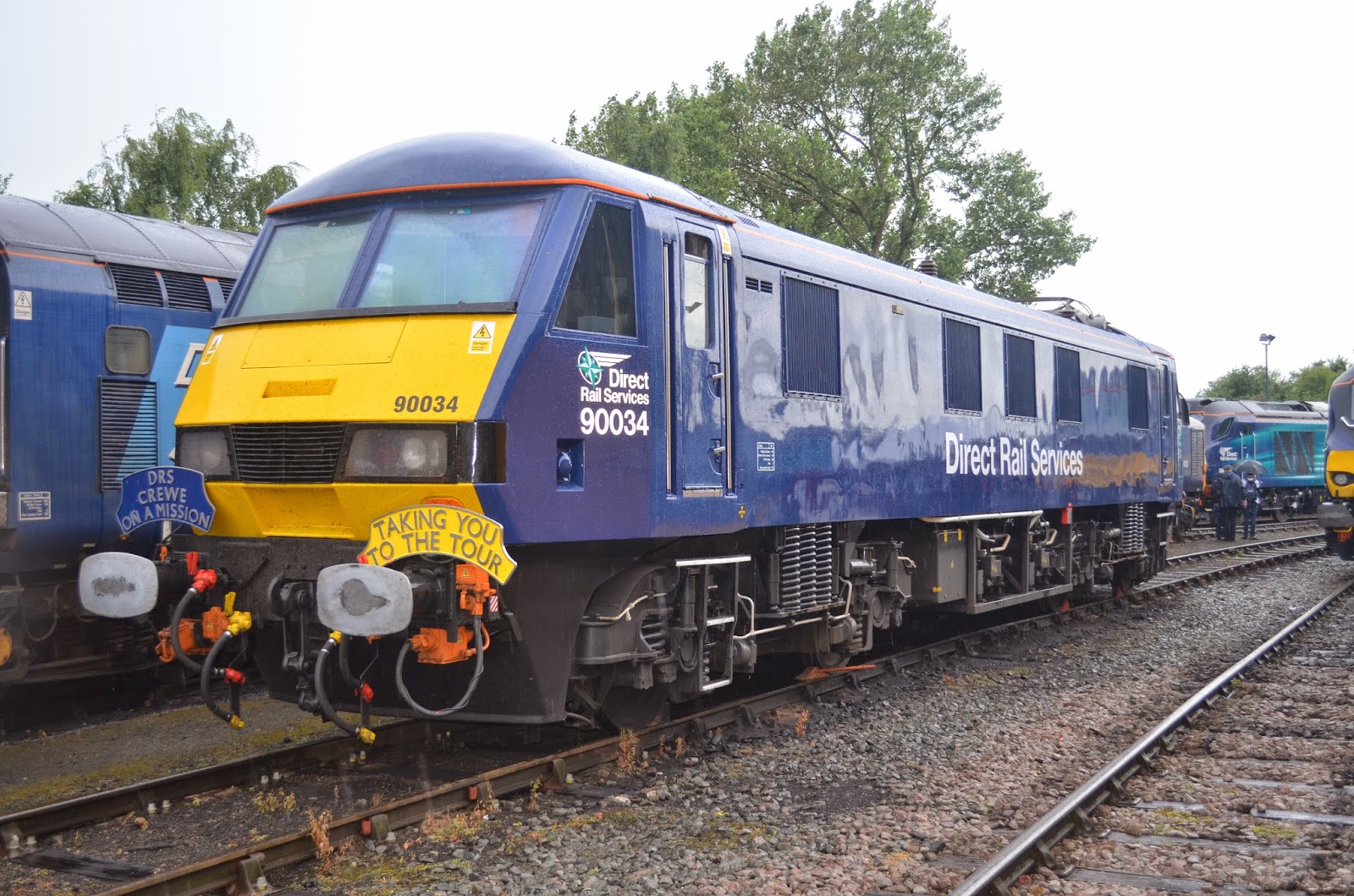 The price and delivery dates are still to be confirmed, but this is sure to be the best 90 ever produced and the specification will have at the minimum of working lights and DCC. 'Silly gimmicks' such as opening cab doors and working pantographs thankfully done away with. Now while the price is likely to be higher than the veteran Hornby offering, so too undoubtedly is the quality bound to be. If like me, you like electrics, support this project and who knows what we'll see next. A top spec '92' or how about the unique 89....

All views on this blog are those of myself and do not necessarily represent the views of my family, friends, dog or employers.