Trainspotting.... what is it?
"A trainspotter typically uses a data book listing the locomotives or equipment in question, in which locomotives seen are ticked off" - Wikipedia

Now I've never took numbers in a book personally or ticked them off. Not because I think there is something wrong with it, more that I've never seen the point in it really. As a photographer of railways though, my aim is is to photo every locomotive out there, but I really wouldn't consider myself a 'Spotter' in the traditional sense. Perhaps a 'Rail Enthusiast' or 'Rail Photographer'?
I first took up photography of locomotives seriously in April 2014. My primary interests being the current freight scene and more specifically the operations of Freightliner in the local area. Growing up a stones throw away from the Freightliner terminal at Garston, I've always been subjected to their Class 08's, 47's, 86's, 90's and in more recent years 57's, 66's and 70 locomotives.
Nowadays, the Class 08 (as well as the 47's and 57's) have been done away with, the duty of shunting subsequently passing on to the mainline locomotives that  bring the trains in to the terminal.
So waking up on Saturday 11/10/2014 my plan was to head out to Garston FLT to photo the Class 90 working of the day, the 4K64 09:16 Garston FLT-Crewe Basford Hall. There's no two ways about it, Class 90's are my favourite class of locomotive. I dont know why exactly, I just know that they are. Since April it has been my intention to photo all of the FL Class 90 fleet (and indeed the entire Freightliner Intermodal fleet) at Garston FLT. I had an early success rate, bagging all of the original Freightliner grey and green and yellow liveried machines straight away. At the time there were 2 'Skoda's' in Powerhaul livery, and although I have managed to photo both 90045+90049 at different places in the country, at Garston they have eluded me. That was until this Saturday morning...

Setting off in my car, I would have been disappointed at anything less than 45 or 49. Having seen that both were available for traffic on the Friday (not in for exam etc) I was feeling somewhat confident. Normally when I get to Garston I drive past the terminal first of all on the bypass, to see what is in the yard.  9 times out of 10 as of late this has resulted in disappointment with the same locomotives cropping up on a regular basis (most notably 90041/6/7). To my delight 90045 was sitting patiently waiting to be pressed in to service. 90045 also has the honour of being my favourite 90, The first 90 to carry Freightliner Powerhaul livery (the best livery the class has ever carried in my opinion) and also a locomotive I've done mileage behind. Leaving 6 mins early the 90 made a fine side to finally capture whilst taking the slow journey out of the FLT.. 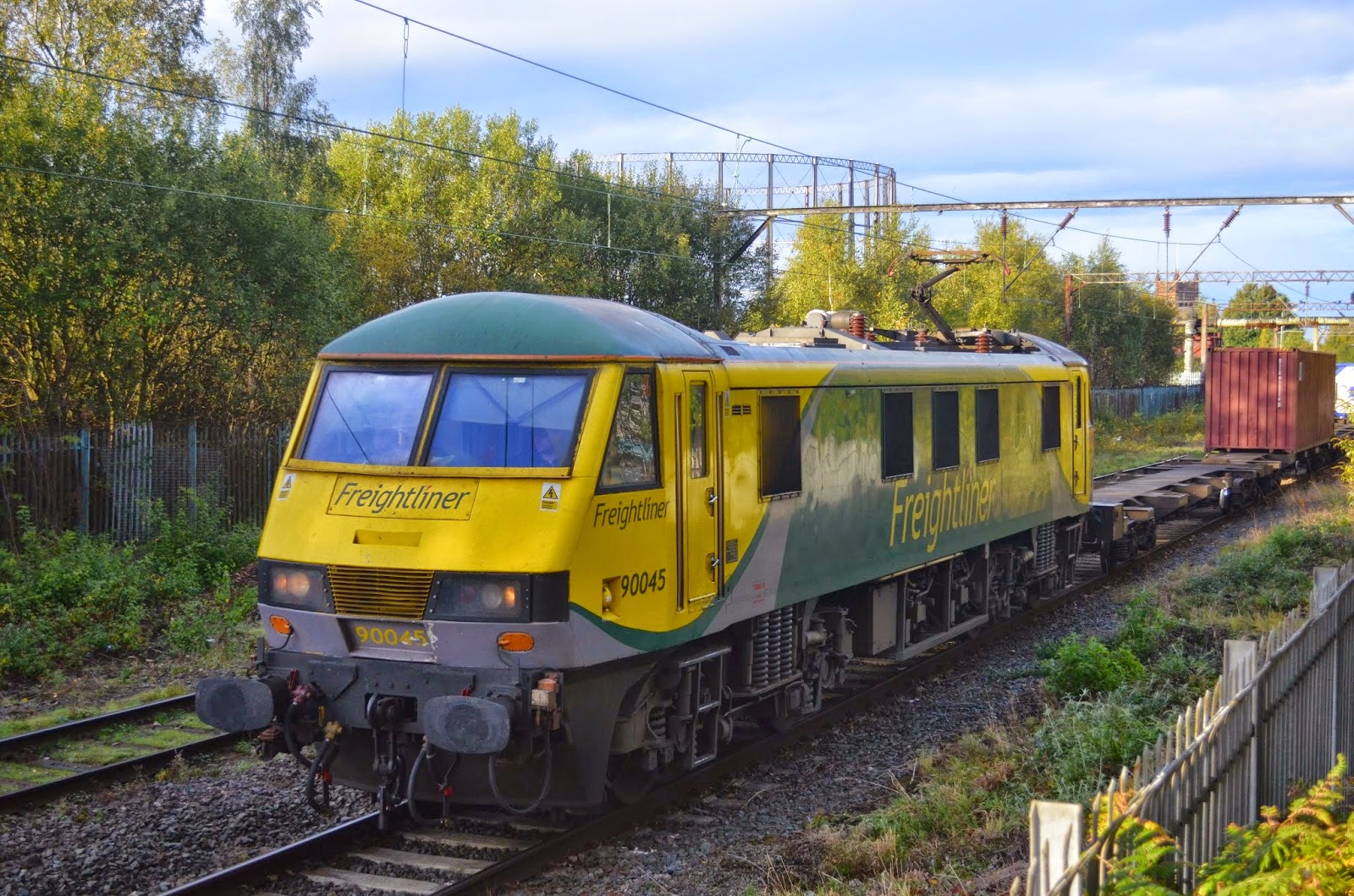 Saturdays are a bit quiet for Freightliner trains, so the only other train I planned on possibly going out for was the 4M01 Coatbridge FLT (Glasgow)-Crewe Basford Hall. Normally in the hands of a pair of dependable veteran Class 86's. Like the 90's, I was lucky to capture most of the FL 86's early on. 86612 was my last one, but I got this at Crewe Basford Hall so wanted to get it on a service train still. Another, 86622 which carries the distinctive Powerhaul scheme, was one that I'd manage to photo on a couple of occasions but had never really got that 'Definitive' picture. I told myself that in an ideal world, 86612+86622 would be working from Coatbridge today. For the shot I decided that Winwick Junction was the spot to go for. This is a great location for photos, you are easily able to get a complete train in if you are standing in the right place! Having left the Scottish terminal some 71 minutes early the train passed through Wigan North Western just the 45 mins early. For some reason the train passed Springs Branch junction and was then held. Eventually 3 mins early the pair of 'Cans' screamed through Winwick. With the camera pressed against my eye, I couldn't see the numbers of the 86's, I just knew one was in the original Freightliner Green/Yellow livery and the other in Powerhaul. Once passed, I looked at the photos I'd taken and was shocked to discover it was indeed the dream combination of 86612+86622!! Satisfied with my work for the day I went home. My only regret from the day? I didn't put the lottery numbers on last night because it looks as though my luck was in yesterday... 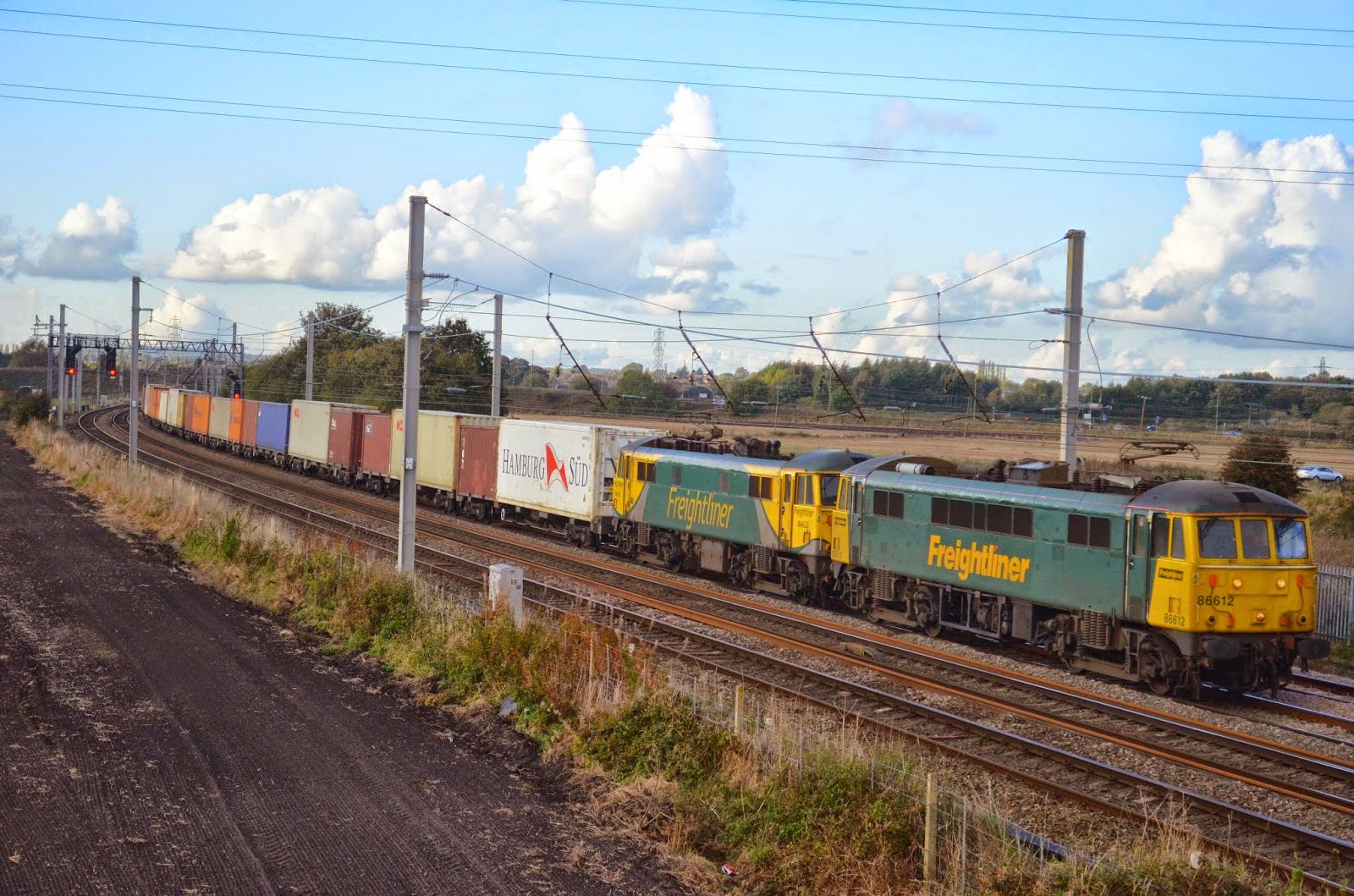