It's been a while since I last updated this blog, so understandably quite a lot has gone on in the railway world since then! The aim of this post is to pick out of the highlights of the past few months. 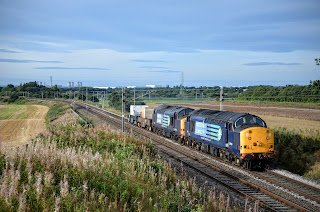 Finally coming to the realisation that they probably had more locos than they did work, DRS have offered a number of locos available for sale over the last 12 months. Whilst the last remaining 47's were sold off, a number of Class 37's have also faced the chop. 2 years ago Colas Railfreight bought several 37s out of preservation for test train workings, a contract won from DRS. Subsequently, 37's fell out of favour with the Cumbrian operator (except for the 37/4 sub class with passenger contracts with Abellio Greater Anglia and Northern). DRS have started to withdraw locos with high engine hours or that are close to needing major attention. This has included some of the 37/6 locos once of Eurostar EPS. 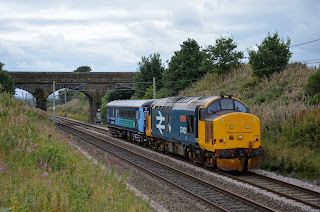 In the other direction, DRS continues to overhaul 37/4 locomotives for their passenger contacts. Released from RVEL Derby last Summer, 37424 was extensively rebuilt and finished off in large logo livery as per 37401/2/3. 37407 is almost finished at Loram Derby and also has been finished off in the retro BR scheme. 37423 has just been released back to traffic after a general overhaul and is currently plying its trade on the 'Short set' in East Anglia. 37422 has been moved to Barrow Hill for attention, internal and external with its deteriorating bodywork a reason it never received any decals, running around in base DRS blue for the past 2 years or so. 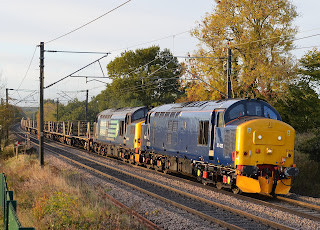 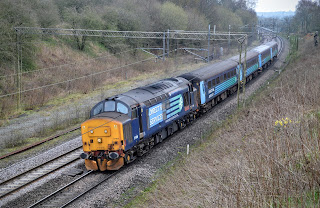 A full update on the new owners of the DRS 37's will appear here shortly when complete. 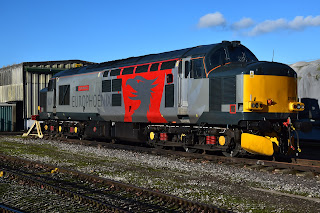 3 Weeks ago today I had a wonderful day on the Cumbrian Coast with these classic BR diesels. Starting off at Warrington Bank Quay with a pendolino to Preston, 37409 'Lord Hinton' was waiting to take us forward to Barrow. Reported to be in 'Poor Health' in the days prior to the trip, the loco was purring like a cat in Preston station. The departure was as spirited as expected and after a short stop at a signal outside of the station, 409 was opened up to all its glory. A faultless trip to Barrow via Lancaster and Carnforth followed.  At Barrow there was a quick swap of trains to catch the 11:38 service to Carlisle, another 37 hauled set. I'd wanted 37402 or 37403 but with both locos out of service, at Carlisle and Crewe respectively, 37401 'Mary Queen of Scots' was awaiting us. A few quick photos were grabbed before a mavellous departure from Barrow. 37401 was in fine form, the driver presumably enjoying himself as much as the many enthusiasts on board! Arrival at Carlisle was on time and there was a quick rest for the English Electric type 3 before 'Pushing' the set back down to Barrow. This was a truly special day being able to enjoy these fine machines, fantastic scenery alongside the person I love. 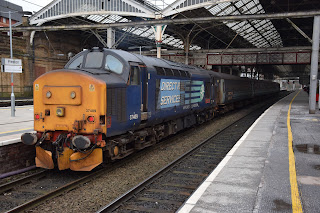 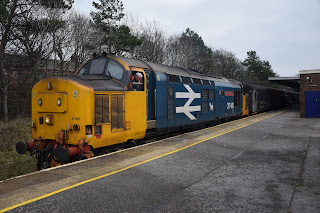