I've been interested in railways for as long as I can remember. Growing up, my bedroom window looked out on to Allerton TMD. Allerton TMD is a depot based in South Liverpool and was built as part of the electrification of the West Coast Mainline (WCML). Over the years it has played host to AC electrics, DMU's and most types of British Rail diesels. It is perhaps though, most remembered for its fleets of Class 08 and 09 shunters. A shunter specialist, Allerton boasted a large allocation of shunters that were not only used around the Liverpool area, but all ove
r the North West. Indeed under EWS ownership, the WSNW pool was allocated to Allerton but had examples based as far north as Carlisle! Generally the locos would receive basic maintenance locally whilst 'on the road' (A + B exams) and return to base for heavier work.

The view from my bedroom looked out at the wheel lathe and in front of that, just behind the garden fence were 2 sidings that over the years were used for arrivals by road transport and more famously for storing scrap locomotives. One of my earliest memories of this was in the early 90's during the BR/RFD days looking out the window at a long line of 'scrap' BR blue 08's. When railway people talk about 'iconic locomotives' they talk about Deltics, Westerns, Class 47's (and rightly so). But what about the humble Class 08? For me, when I think of British Rail, the iconic wasp stripes of the Class 08 shunter are at the forefront of my mind. These purposeful machines, now with 60 years service in some cases, were once everywhere. No matter where you travelled on the network, every depot, yard and even large station had at least one 08 or 09. Granted nowadays, their use is not as widespread and their numbers much reduced due to changes in operations, but they are still around, still useful.
I can remember looking out at that scrap line a few weeks or months later and seeing scrap men dispose of them on site and feeling sad, even angry. This window was to provide this view several times. I've seen plenty of locos arrive over the years on the back of road transport and be unloaded at Allerton. Normally once unloaded the shunter would be moved on to the shed area and another loco brought round to depart on that same trailer. 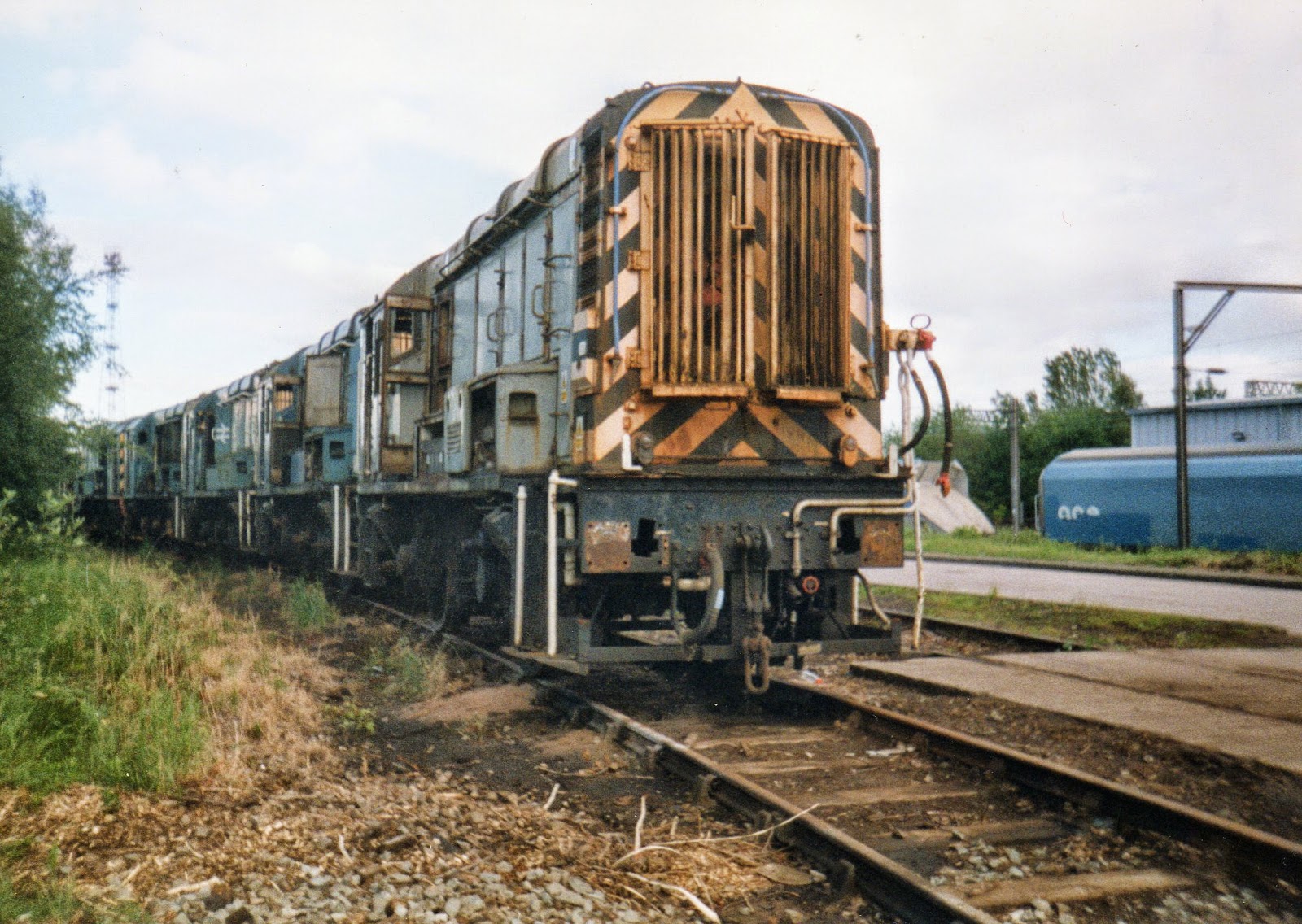 I was fortunate enough to secure two weeks work experience with EWS in May 2003 whilst in my penultimate year of school. During my time there, one of my main duties was to help out with the ongoing D exam on EWS liveried 08632. This required the changing of some components and the topping of levels etc as well as testing. Over in Garston yard, 09021 was the pilot in use and this would see use with auto traffic in the area. This visited one morning for a B exam and moved over when granted permission by the signal box. 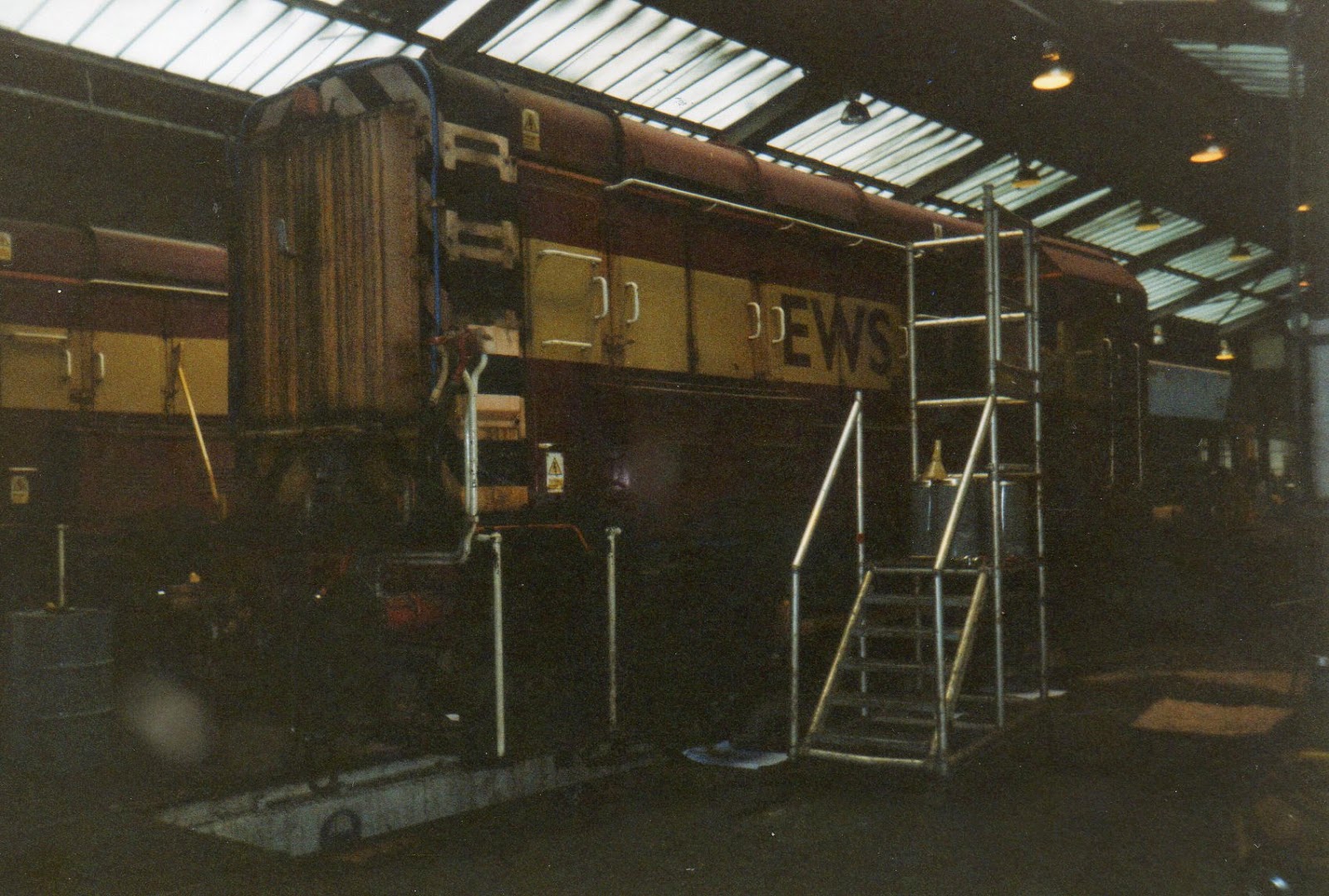 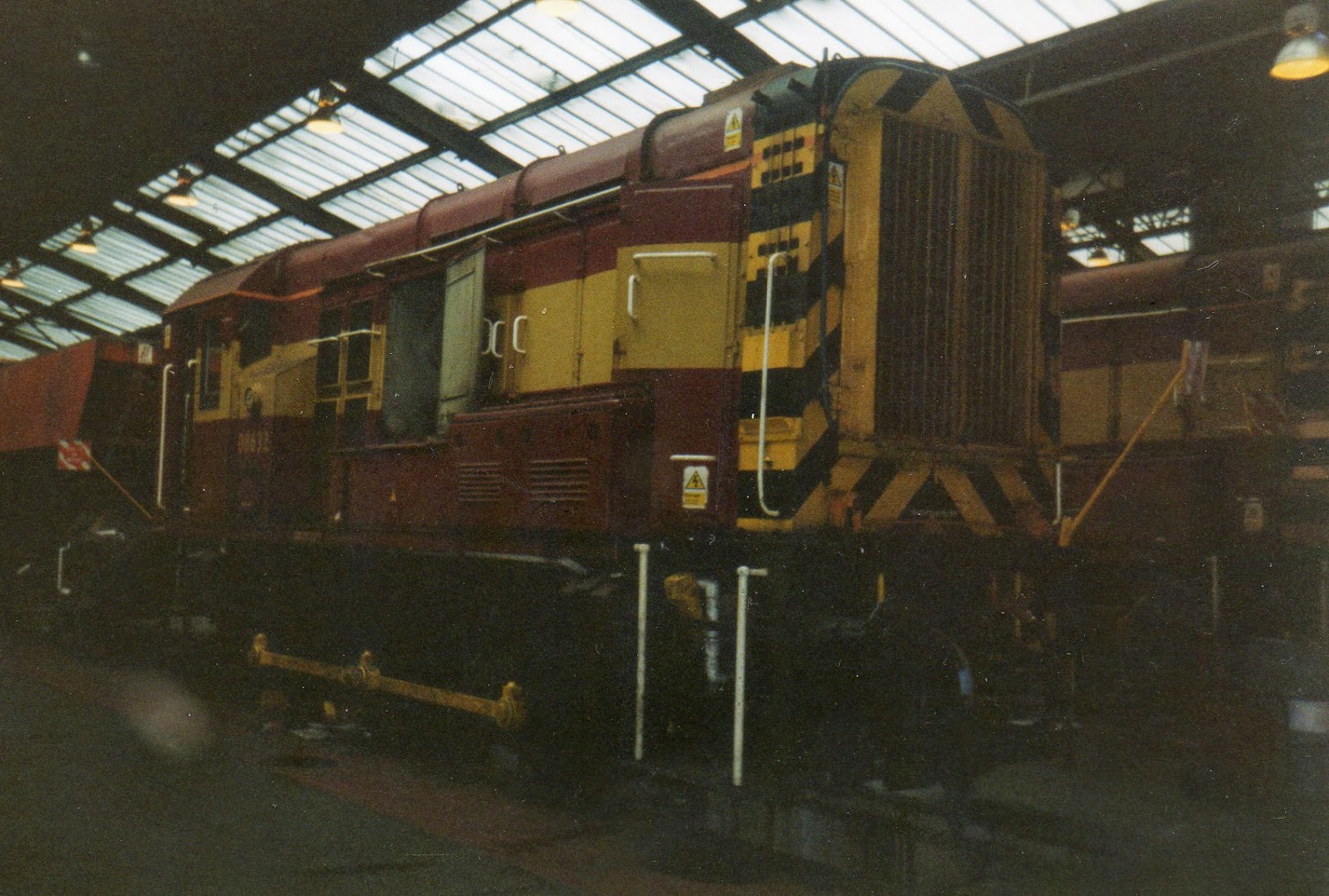 Shunting around Allerton at this time was being handled by RES liveried 08701. 08946 was at this time stabled around the back and had some electrics robbed from its cab. This wasn't the end though and at some point later it was repaired and it did indeed return to pilot duties (still stored on paper) when 08701 moved on. During this two week placement I was also fortunate enough to travel to Trafford Park Euro terminal to service the two outbased 0-6-0's there. At the time one pilot was in use daily forming the intermodal trains that would be forwarded on through Europe, and the other was a spare. 09020, fresh from a major overhaul at Ferrybridge, was the pilot and long term North West resident 08737 was on hand as the spare. After servicing 737 we moved on to the mess room to await permission to take 09020 for it's turn. We moved the 09 up to the arrival road behind 737 and did the same. 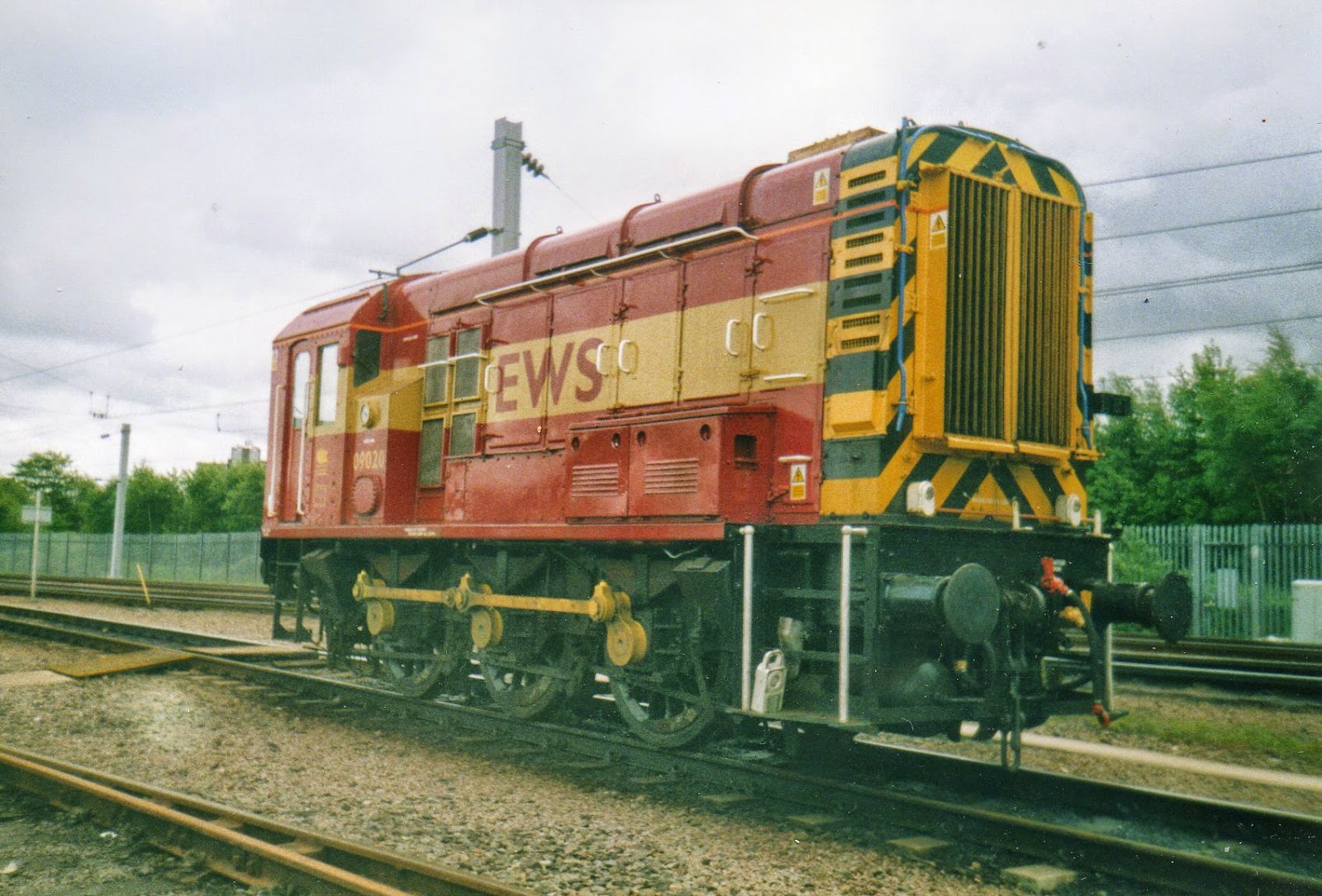 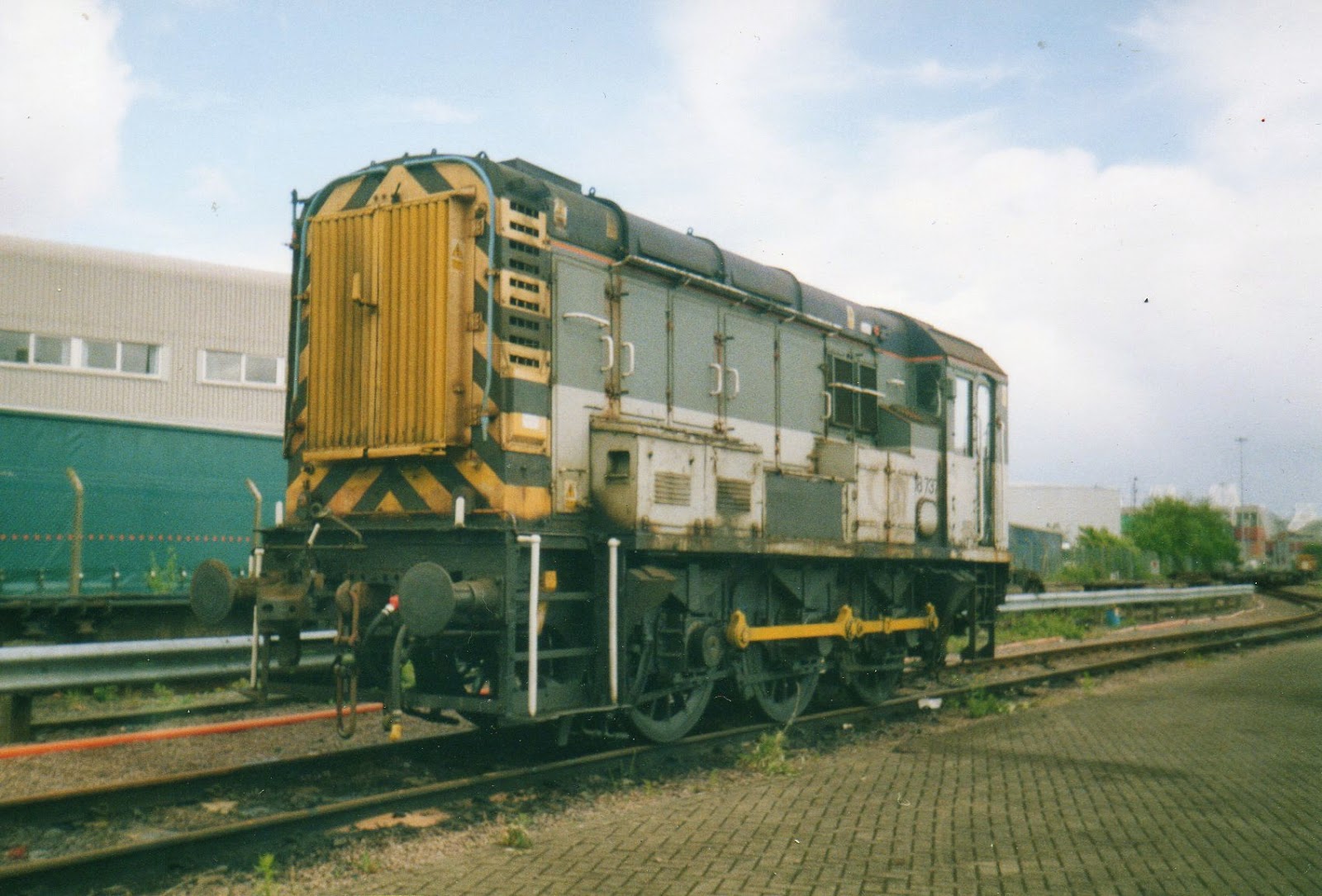 Allerton in the coming years would continue to play host to regular shunter arrivals and departures. The depot won a contract to service Virgin voyagers and had some lanes at the shed specially modified for this use. I think at its peak, 3 voyagers a night would run in to Allerton for cleaning, servicing, fuelling and stabling till early the next morning. Other interesting jobs including the fitting of a number of class 37/4 locomotives with new signalling/radio equipment. 08737, was given a full overhaul including a repaint between 2005 and early 2006. This shunter came out in a version of the EWS 'more yellow' scheme which was initially introduced for a contract won at Ketton cement works. 08737 had a darker yellow band when released but was a credit to the team. It was stored in 2004 by EWS in the great shunter cull for having an oil leak. It languished at Allerton spending some time stored in the open and being used as depot pilot! 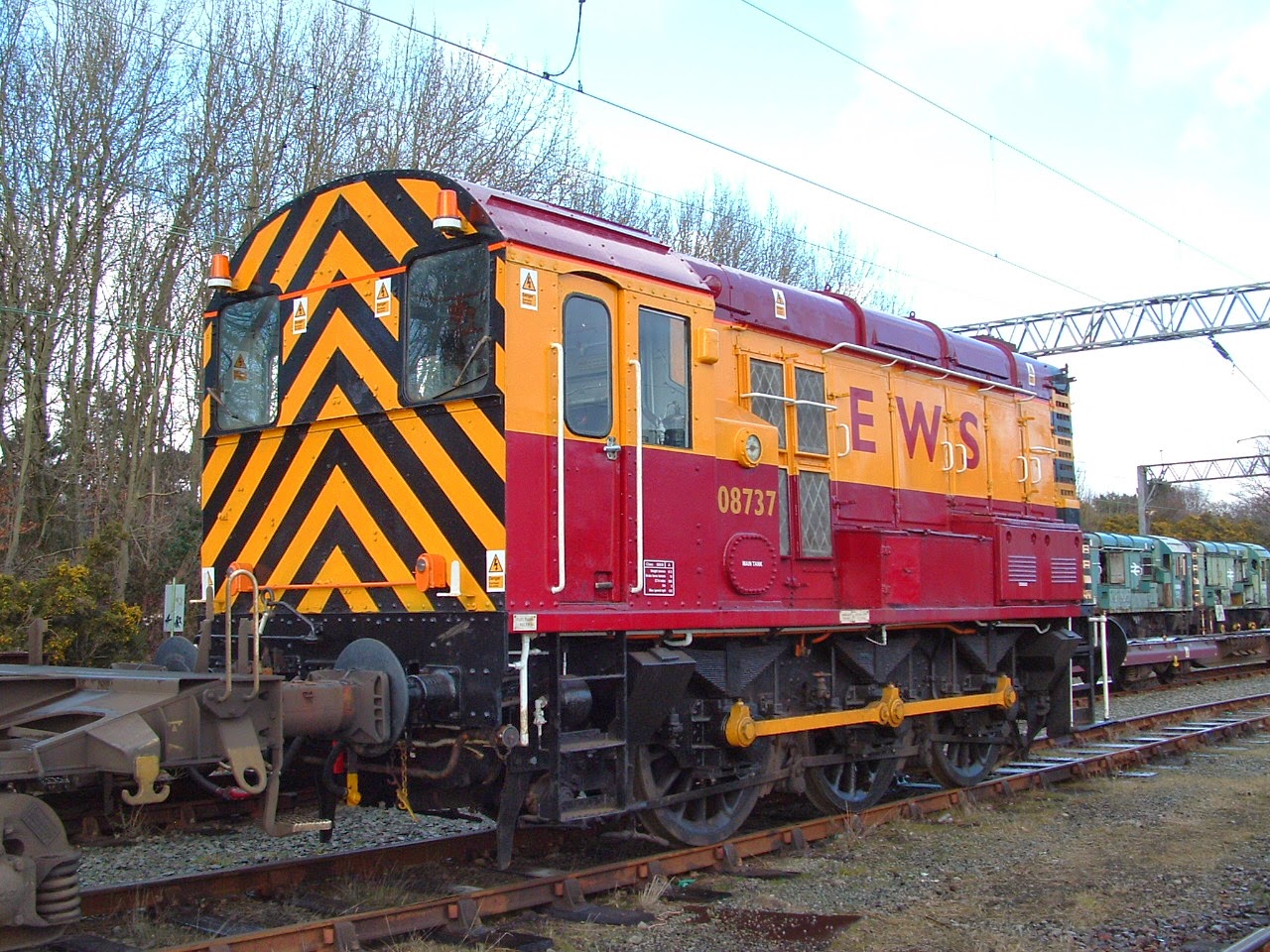 Work started to then thin down, with regular rumours of the depot closing down. Eventually with its role diminished to basically being a wagon repair depot the decision was made to finally close the TMD. Shunter repairs were now being concentrated at Doncaster Carr TMD as well as Toton and later Crewe IEMD.

The wheel lathe continued to see regular work and in the end, was the last part of the depot operational when closed down by EWS/DB Schenker. Merseyrail 507/508 units had their tyres turned here for many years, but with the opening of their own lathe at Kirkdale in 2006 this contract came to an end. 09007 has to my knowledge the honour of being the last operational gronk at Allerton. The faded mainline blue loco was used to shunt wagons in and around the wheel lathe. Demics 08397 and 08954 were stored inside the depot once it was closed along with 'celebrity' 37425, which also saw brief use as the lathe super shunter prior to 09007's arrival. 09007 left Allerton in early December 2009 bringing to an end many many years of active 08/09 use.