LH Group services in Barton-under-Needwood has for the past few years been one of the major shunter overhaul/repair centres. Now a part of the Wabtec Rail group, the company has customers such as Freightliner, GBRF and more recently East Midlands Trains, sending Class 08/09 shunters for attention. The company also receives a lot of the industrial classes of shunting locomotives so are kept busy!

I had several reasons for wanting to visit the site in Derbyshire. Besides the fact that I am a Gronk fan, it was the arrival of EMT 08690 at the end of January that made a visit a priority! Normally based at Leeds Neville Hill, its not exactly one of the easiest shunters to spot. Coupled to the fact that it carries a variation of Stagecoach EMT Livery, a livery that sits well on the 08 I might add, I knew I had to take this chance, this chance was Monday 2nd February 2015. 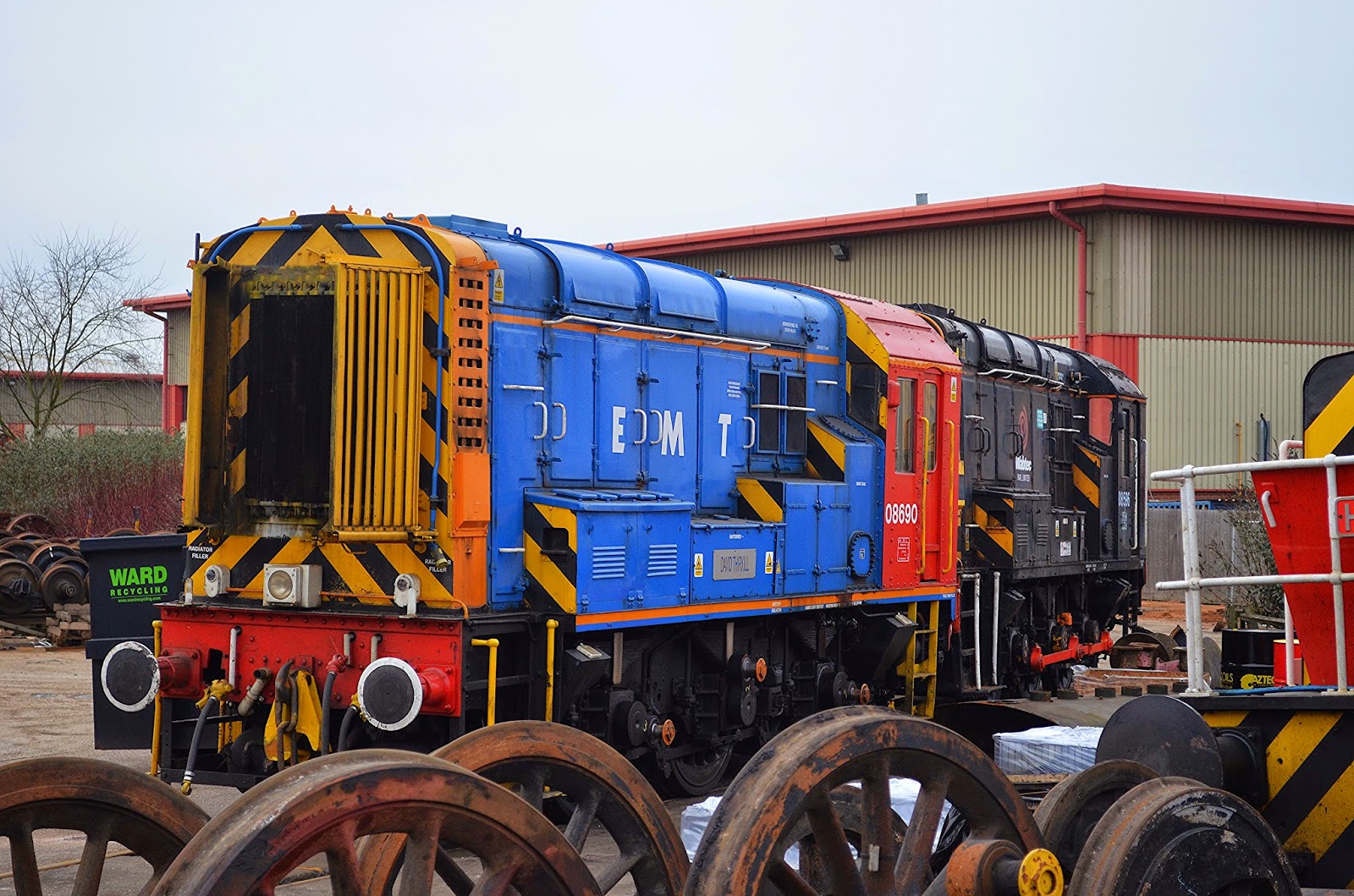 Also as mentioned above, this is the base were Freightliner's 0-6-0 fleet are maintained. Freightliner's fleet has struggled over the past few years, with availability on the floor in more recent times. Locations such as Felixstowe, Southampton Maritime and Trafford Park still have dedicated pilots, whilst locations such as Coatbridge FLT in Glasgow and Garston FLT have lost theirs. With Trafford Park being the only location named there that is 'local' to myself, it is quite rare for me to see a 'Green Team' 08 these days. 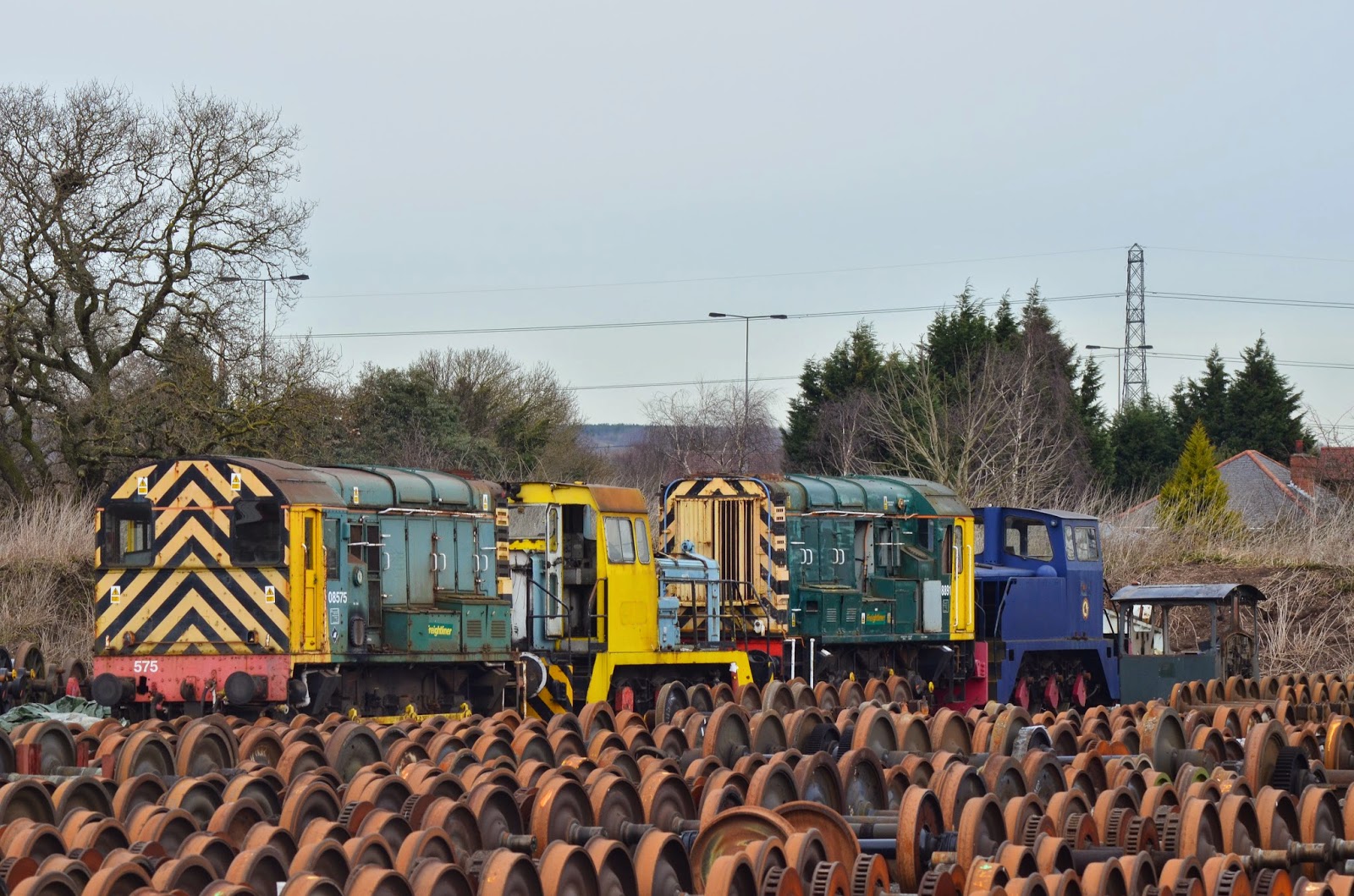 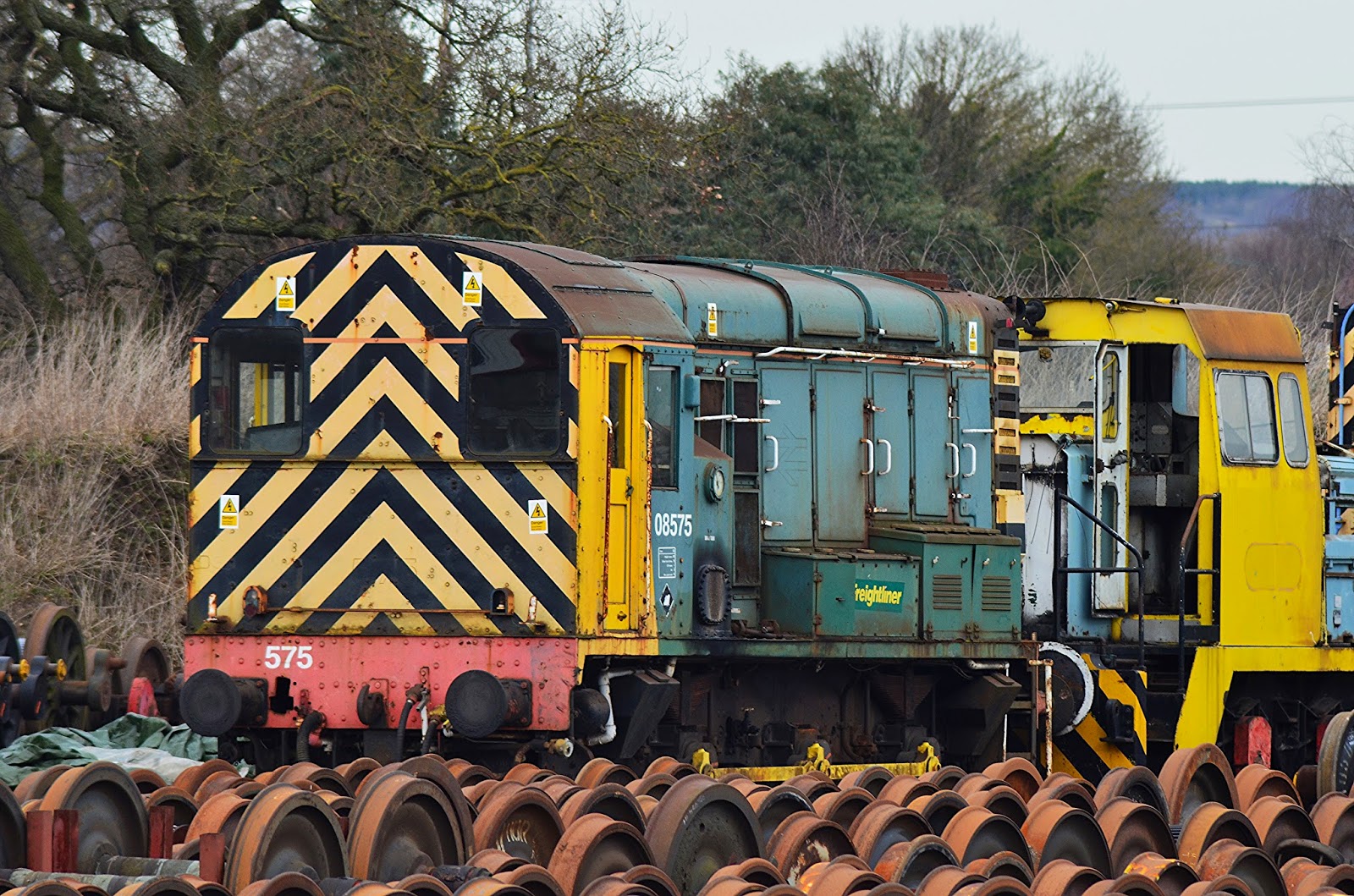 Listed as being on site that day from the FL fleet were 08530, 08575 and 08891. 08530 arrived here in January for a D exam, and unfortunately was tucked up inside the shed (doors closed) so was not viewable. 08575 arrived in 2014 and has joined long stored 08891 in the compound. 575 was involved in a shunting accident at Southampton a few years back, which also involved a Class 66 and 08077. The 08's were pushed through the buffer stops and 08077 never worked again. 08575 did see some use as the pilot but has been laid up for sometime now. 08077 was the spares donor at LH group after the accident and was scrapped on site last year. 08575 appears to have taken its place, although appears largely intact 6 months on. The same can not be said however for 08891, which has been robbed of parts and makes a sad sight. This loco is another reason for my visit, having a bit of a personal connection with it. For many years, it was based at Garston FLT in faded BR blue. Maintenance was done locally at Allerton TMD so I'm more than familiar with it. It was removed from Garston circa 2004 (replaced by 08624 for the record) for some major attention. Following a full overhaul and repaint in to Freightliner Green/Yellow it appeared to have a bright future ahead of it taking up residence at Southampton. Sadly, it was never the same and suffered reliability issues over the next couple of years. Eventually it was laid up at Maritime and transferred over to Barton in May 2008 for repairs to it's cylinder heads and gaskets amongst other things. Sadly the repairs have never happened and the loco is now one of the spares donors on site, it's future looking somewhat bleak. 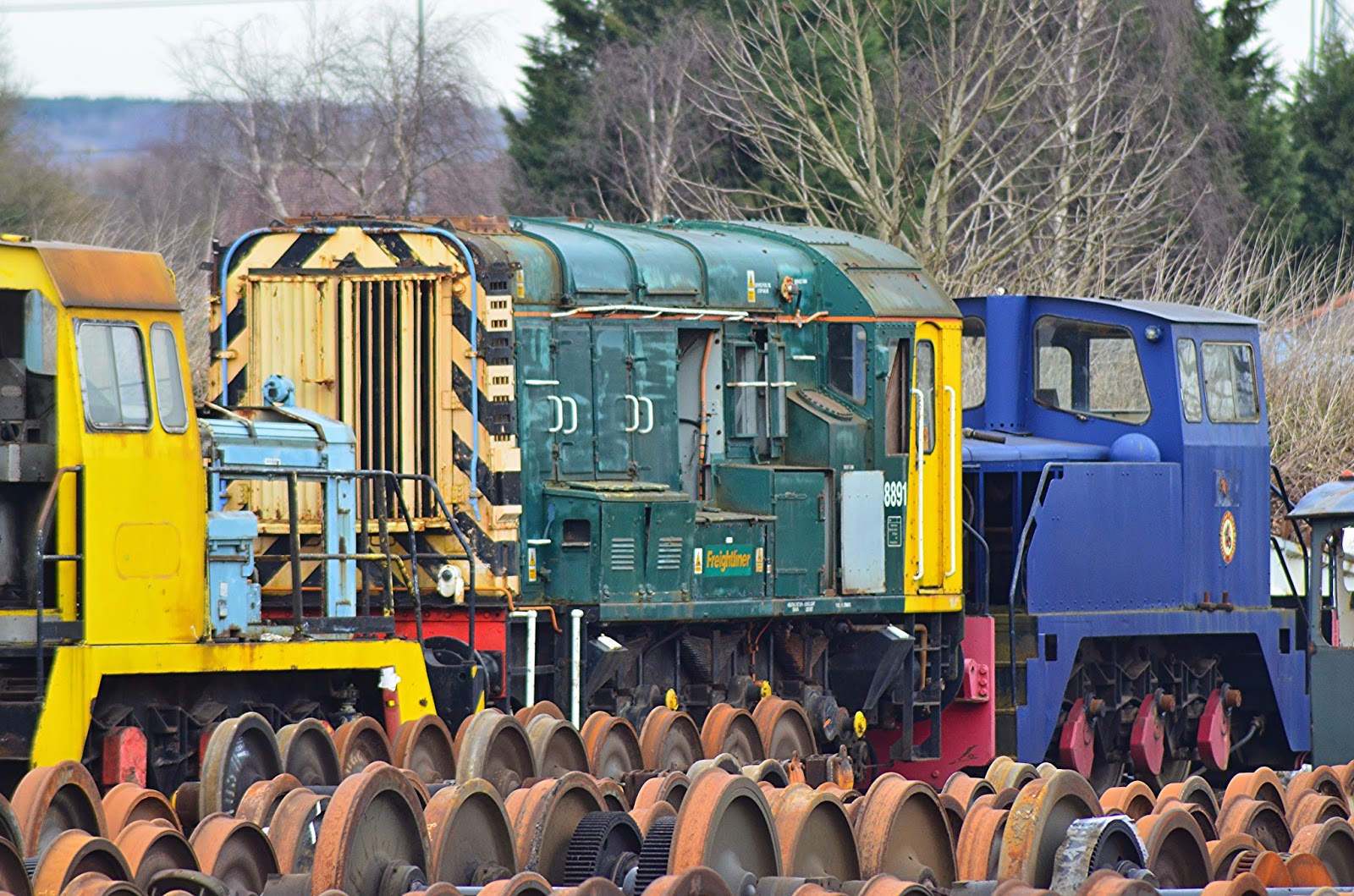 Also onsite was GBRf's 08934 which had arrived for repairs from Cardiff Tidal in Summer 2014. The Cardiff job is a rather punishing one for the shunters and shifted cranks are a regular occurrence. Owned outright by GBRf, it carries what is a variation of BR green. At the time of my visit, the shunter was outside the shed having the finishing touches done to it. It was moved on to Whitemoor Yard, March just 3 days later, in turn releasing former Allerton Gronk 08925 to take on the Cardiff job. 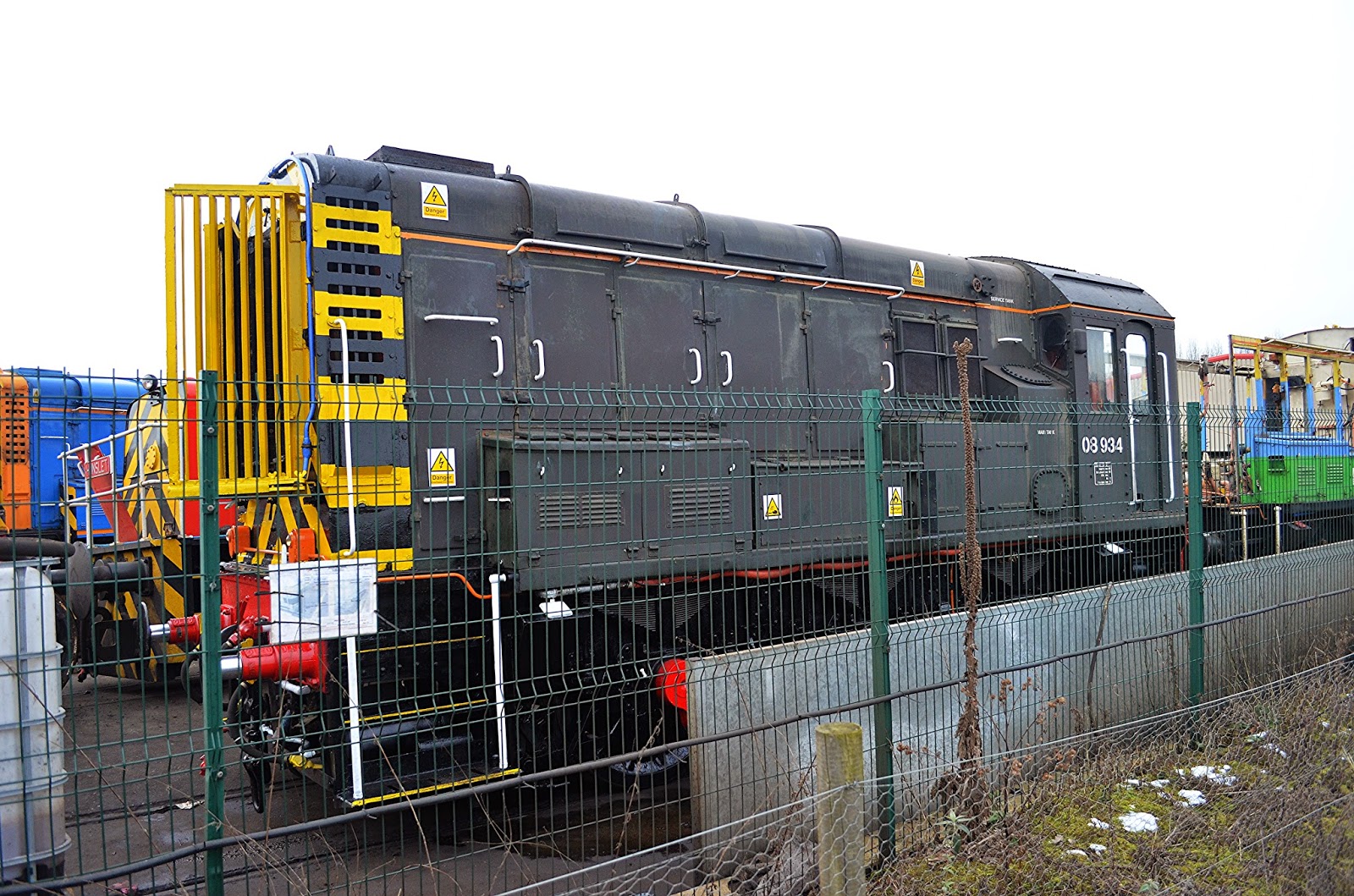 Hunslet Engine Company had 08913 on site undergoing a major overhaul. The loco is in bits, with the empty frame sat in the yard whilst the interior components are no doubt being overhauled. The radiator nose end is sat on the floor next to the loco making an interesting sight. This loco carries Malcolm Rail livery, which consists of a yellow roof and a yellow/blue/green body. Despite being rather unusual, a far cry from the standard BR Blue painted enmass from the 70's, the livery actually looks quite good! The loco had arrived from Daventry after being replaced by DRS Class 37 'Super Shunters'. 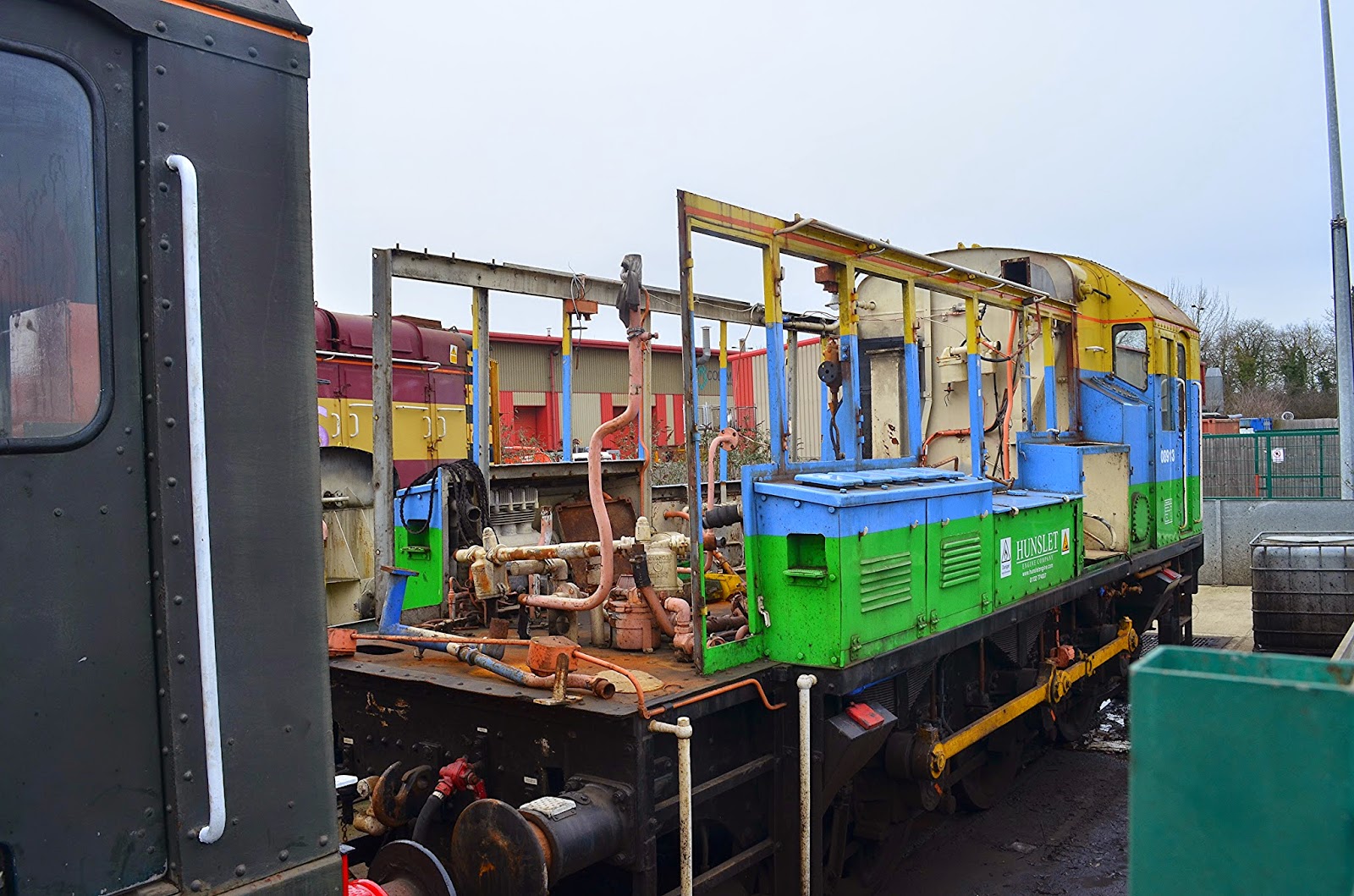 Also from Hunslet is 08393 still carrying EWS livery. The loco was bought from the EMR Kingsbury scrapyard, initially for spares but was found to be in very good condition so is here for repairs. Not much appears to have happened so far and presumably with the works current workload, its fairly low down on the list of priorities. 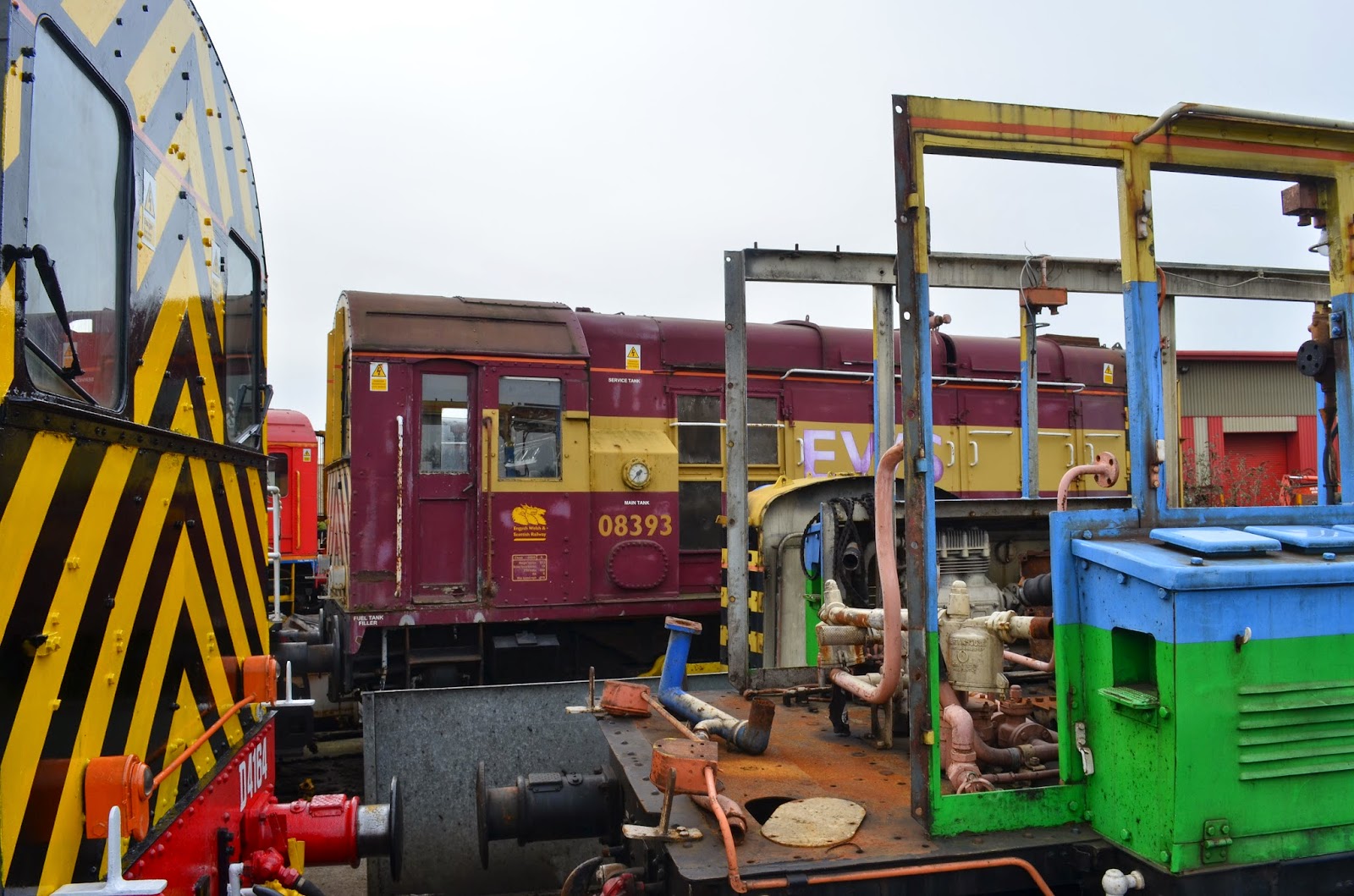 All in all, a very productive visit.

Loco's on site that day included, 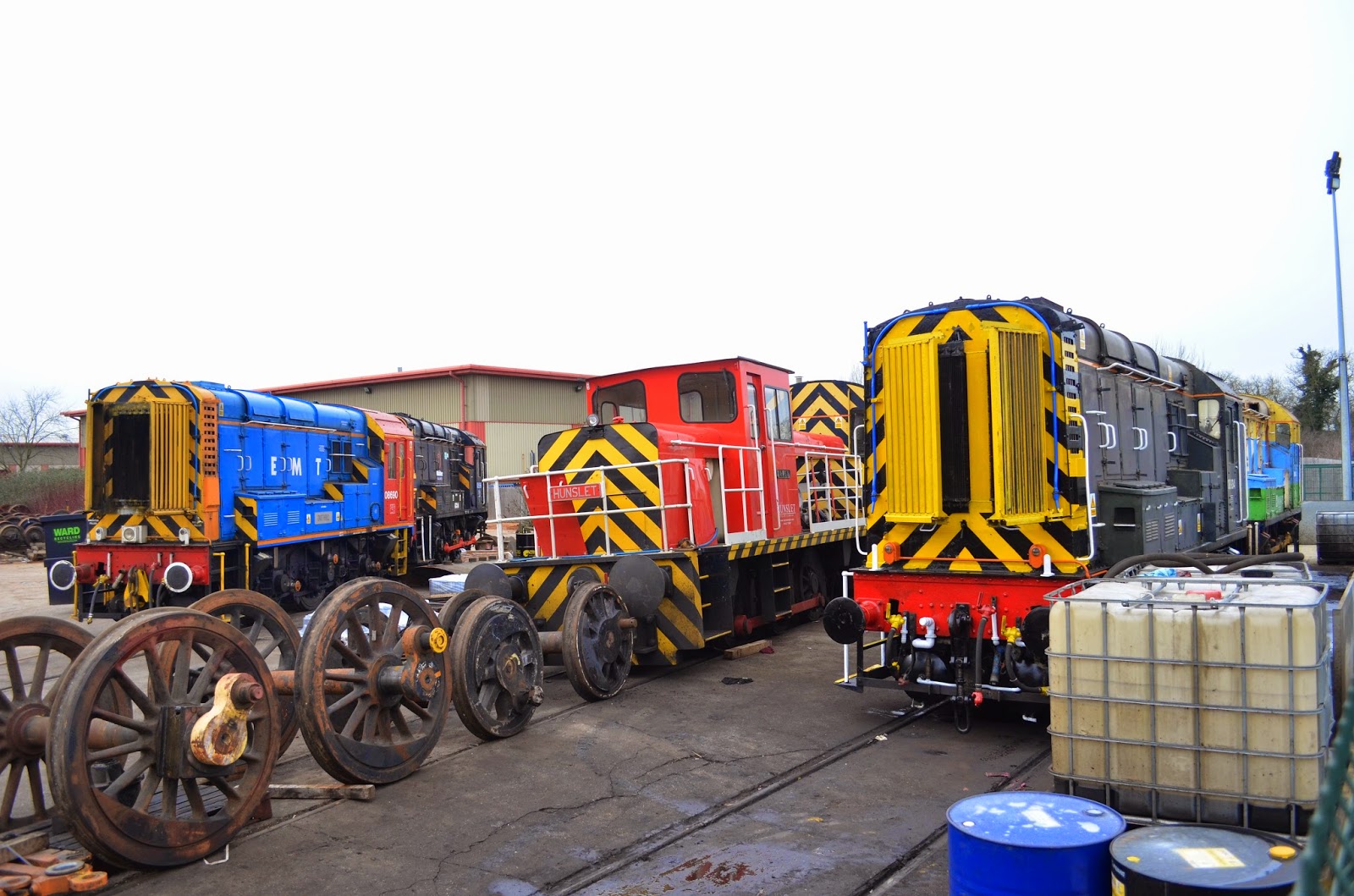