With the weather not forecast to be that great, I decided not to venture too far today. As it happens, the sun came out and despite the wind, it was actually a rather pleasant day. A quick check of the loco lists in the morning set the itinerary for the day.
First of all, the Monday morning 4F64 Crewe Basford Hall-Garston FLT service is generally used as a loco ferry to begin the weeks services. Shown down for this today were Class 86's 86612+86622 accompanied by 90042. They are pictured below amongst the shadows. 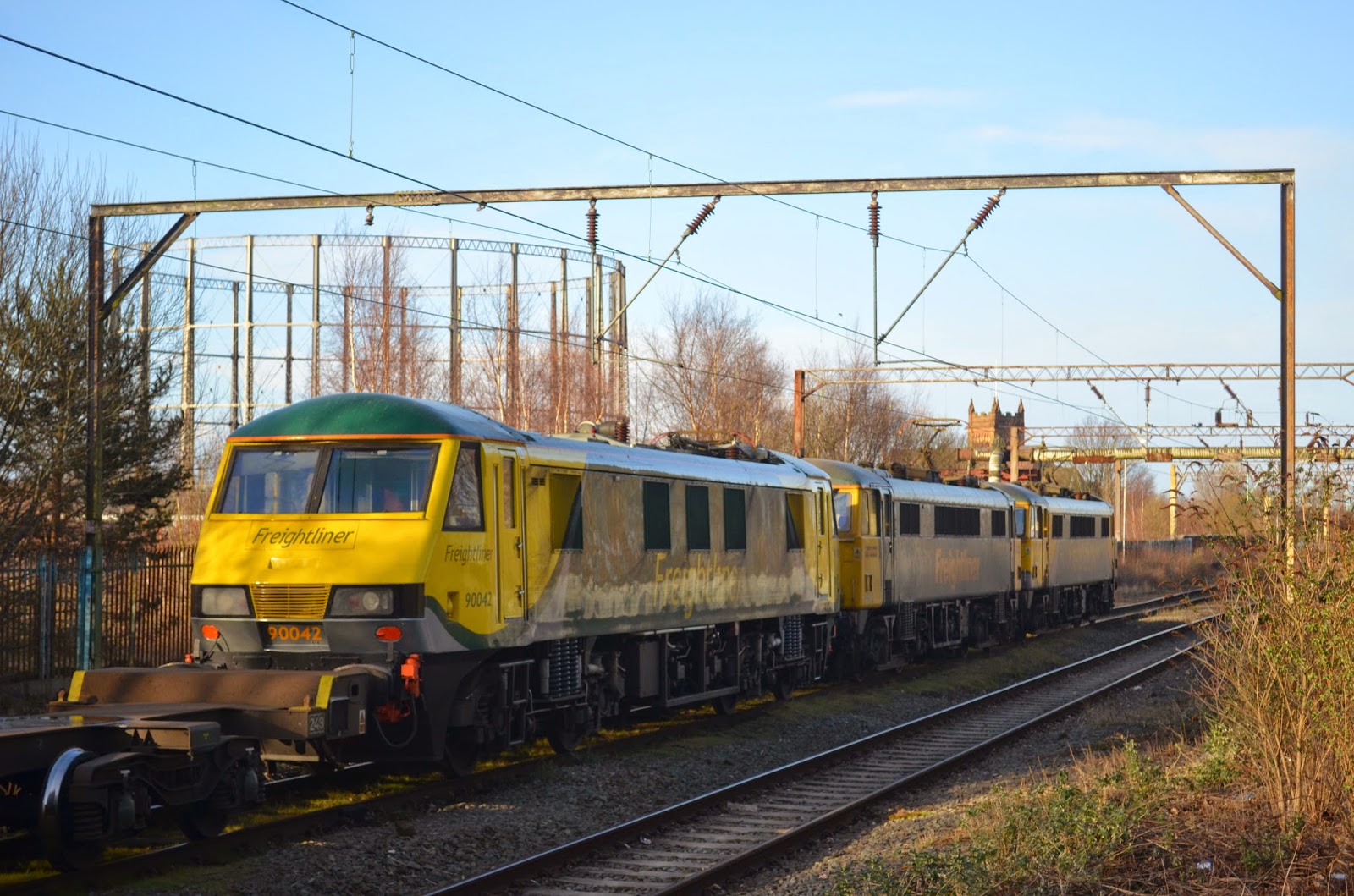 The pair of cans scheduled to later run light engine 0F72 to Ditton and then down to Ipswich on service 4L92. The locos normally stay on the service for the remainder of the week, however, typing this on Tuesday the locos are showing as being due back at Crewe from Garston (4K64) this afternoon with 66954 scheduled to work to Ditton (and Ipswich) later. I'm not entirely sure why this is, I can only assume an exam is due or there is a minor fault with one of the locos. Regardless the pair did indeed run light in glorious sunshine on Monday and I caught them on the approach to Ditton. 90042 formed the usual 90 return 4K64 to Basford Hall, and for this I scooted across to Runcorn station 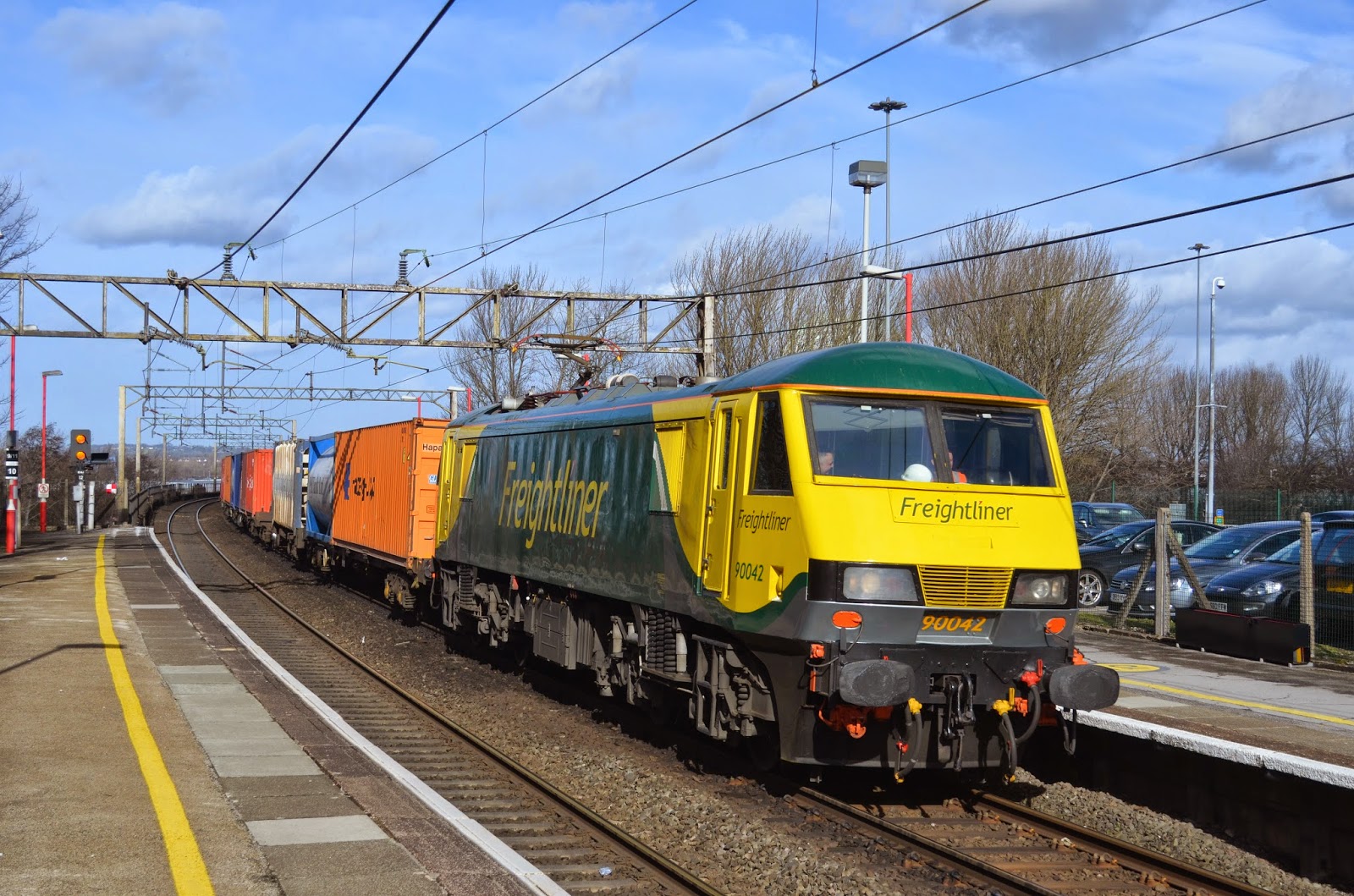 Whilst on Runcorn station, Class 66 66623 arrived on the Folly Lane branch with the 6F33 Bredbury-Runcorn Folly Lane. The loco currently carries an interim livery, based on the blue of its former Bardon Aggregates scheme. With the Bardon contract now in the hands of GBRf, the loco has had all the branding removed and has had it replaced with the new Freightliner logo. Sadly the sun sits in the wrong position for trying to get a perfect photo of this train at the time of day it arrives. 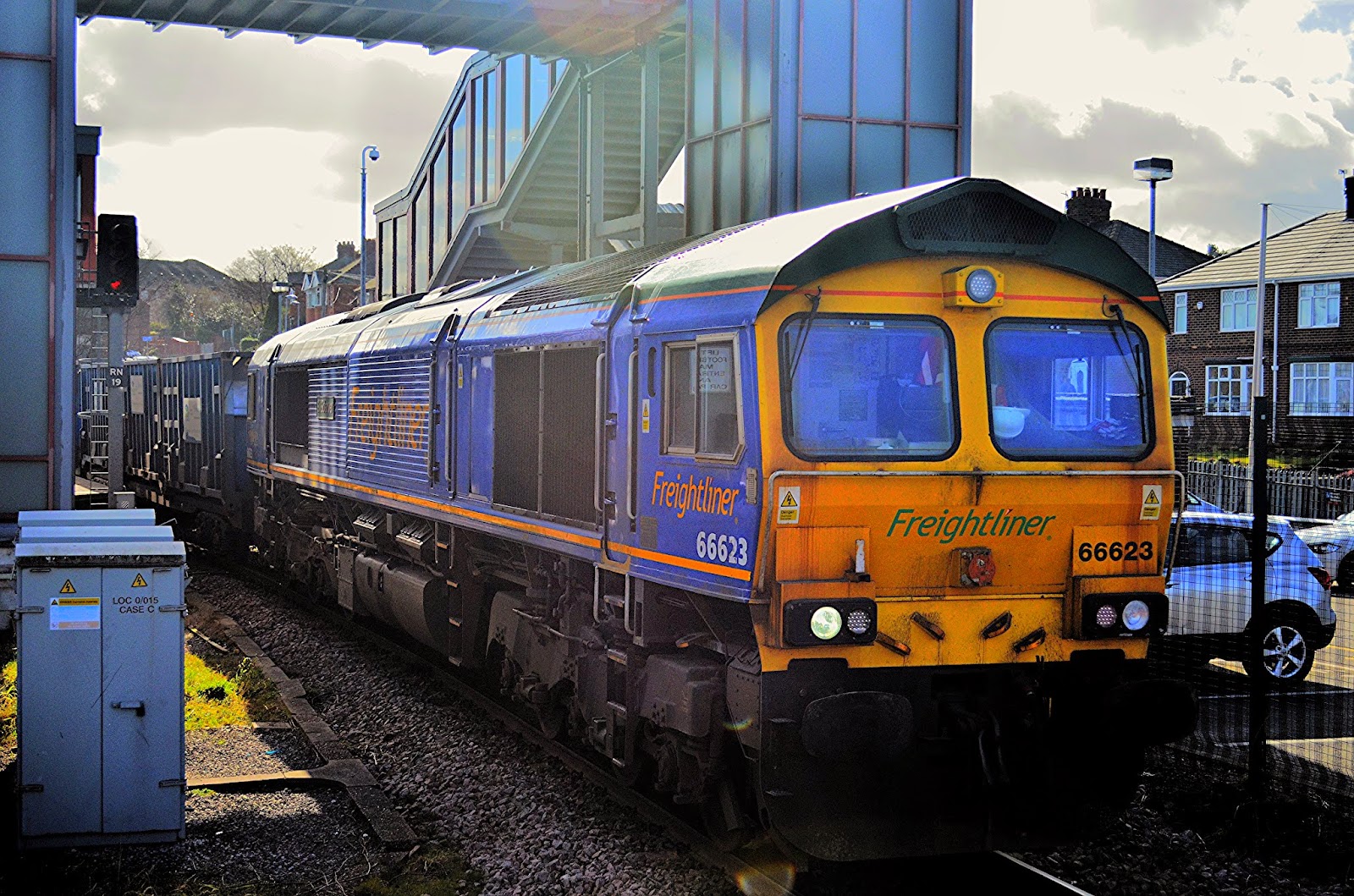 After arrival the terminal, the loco is detached and runs round were it is hooked up to the waiting wagons to form the 6H36 13:30 Runcorn Folly Lane-Northenden return. 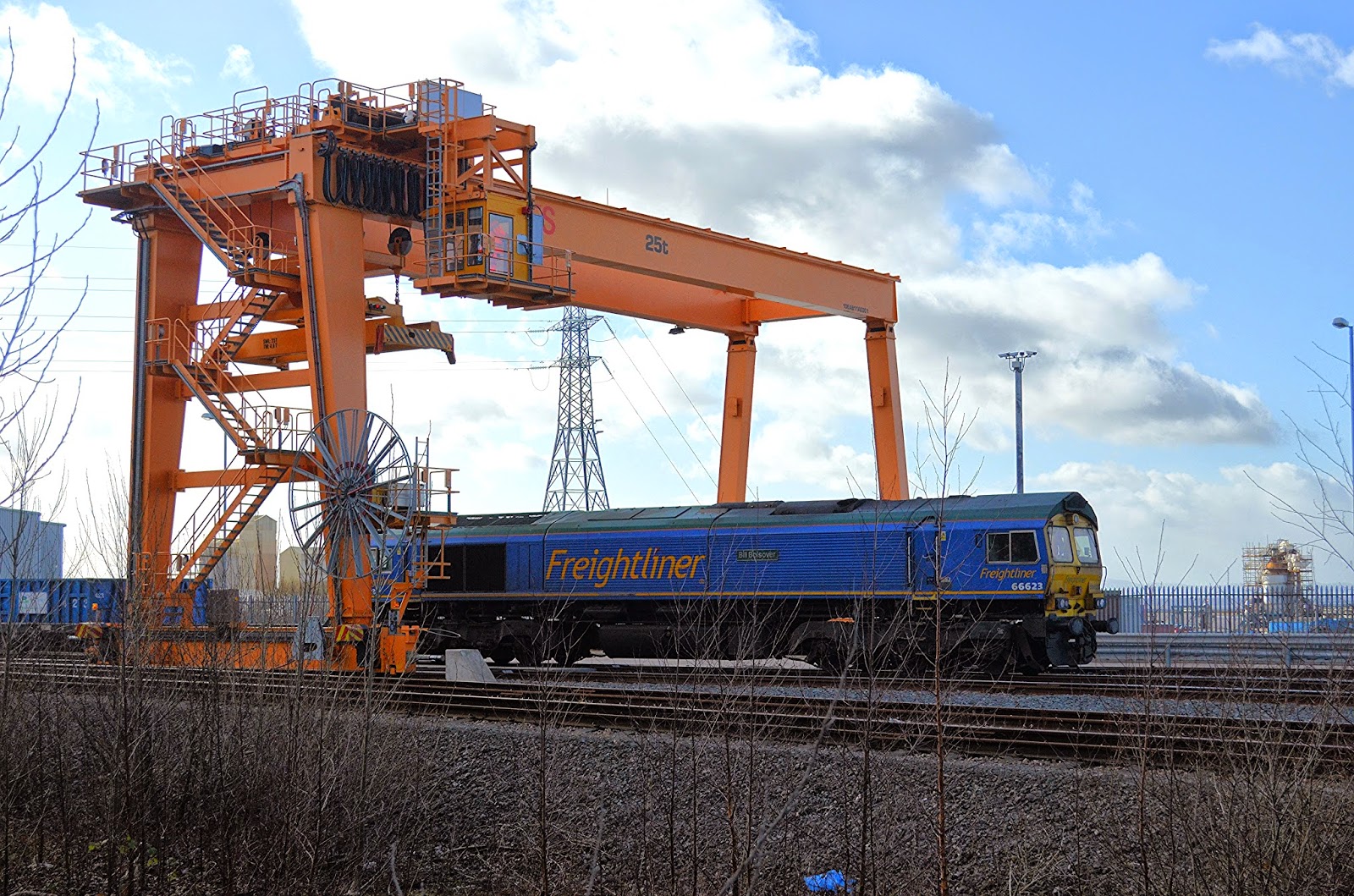 The loco stays on site for just over an hour, before departing and rejoining the WCML at Runcorn before veering off at Hartford jcn. 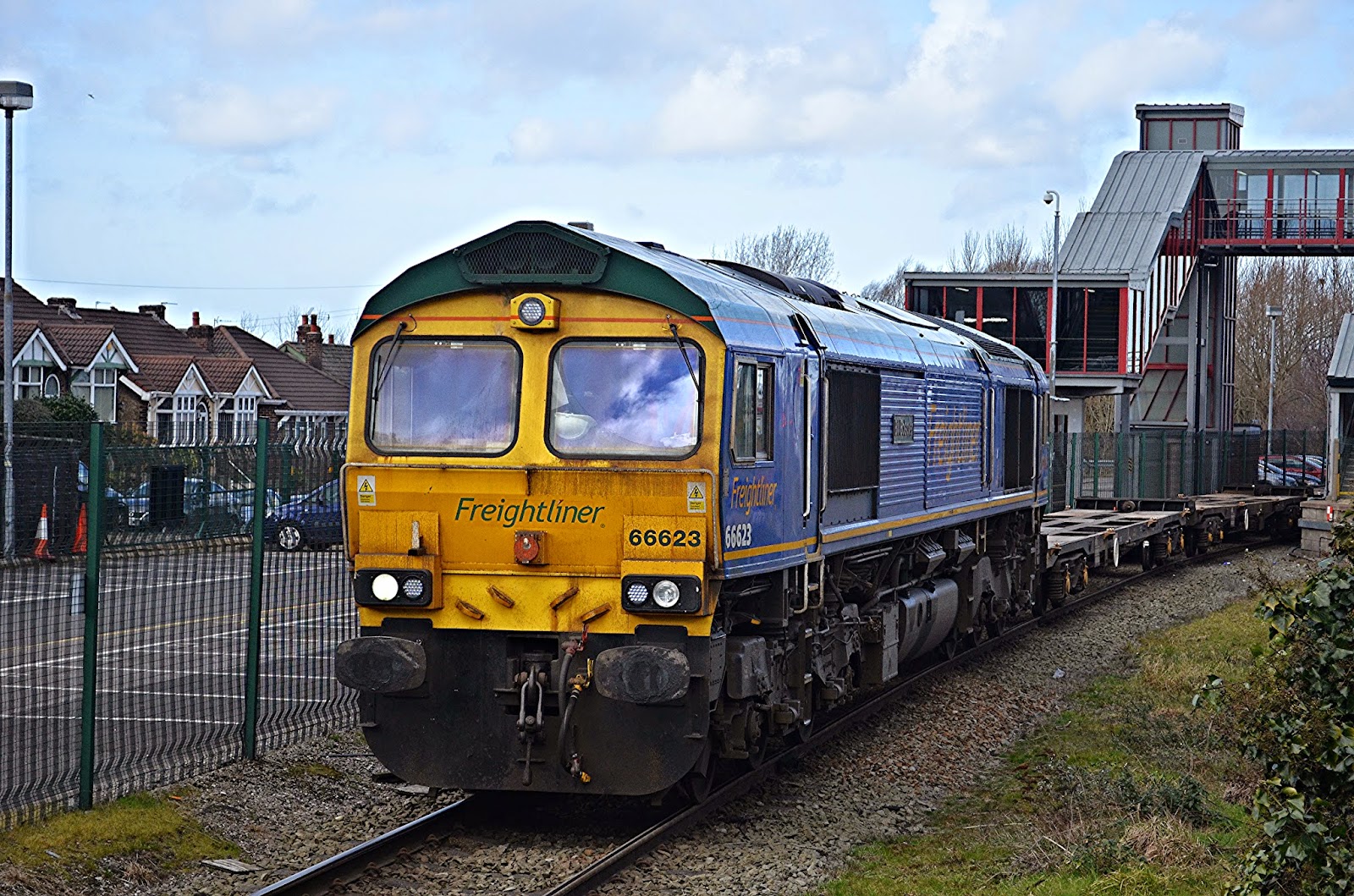 At Runcorn East station, the Arriva Trains Wales 09:50 Manchester Piccadilly-Holyhead 'Loco Hauled' service had a loco change. ATW liveried 67001 which must have needed surgically removing from the set was on a B exam at Crewe and was replaced with EWS liveried 67020. DVT 82308 was on the rear. 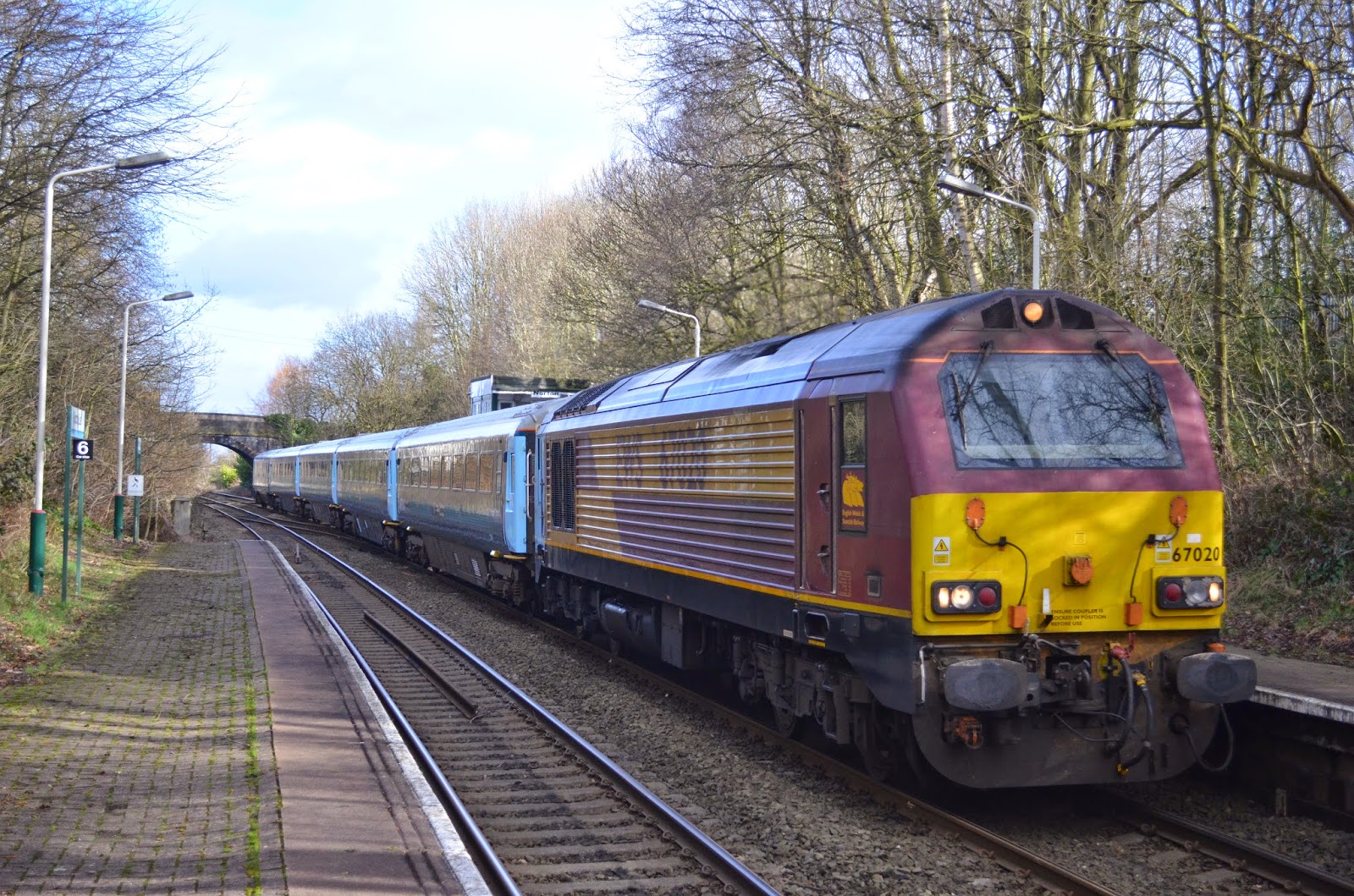 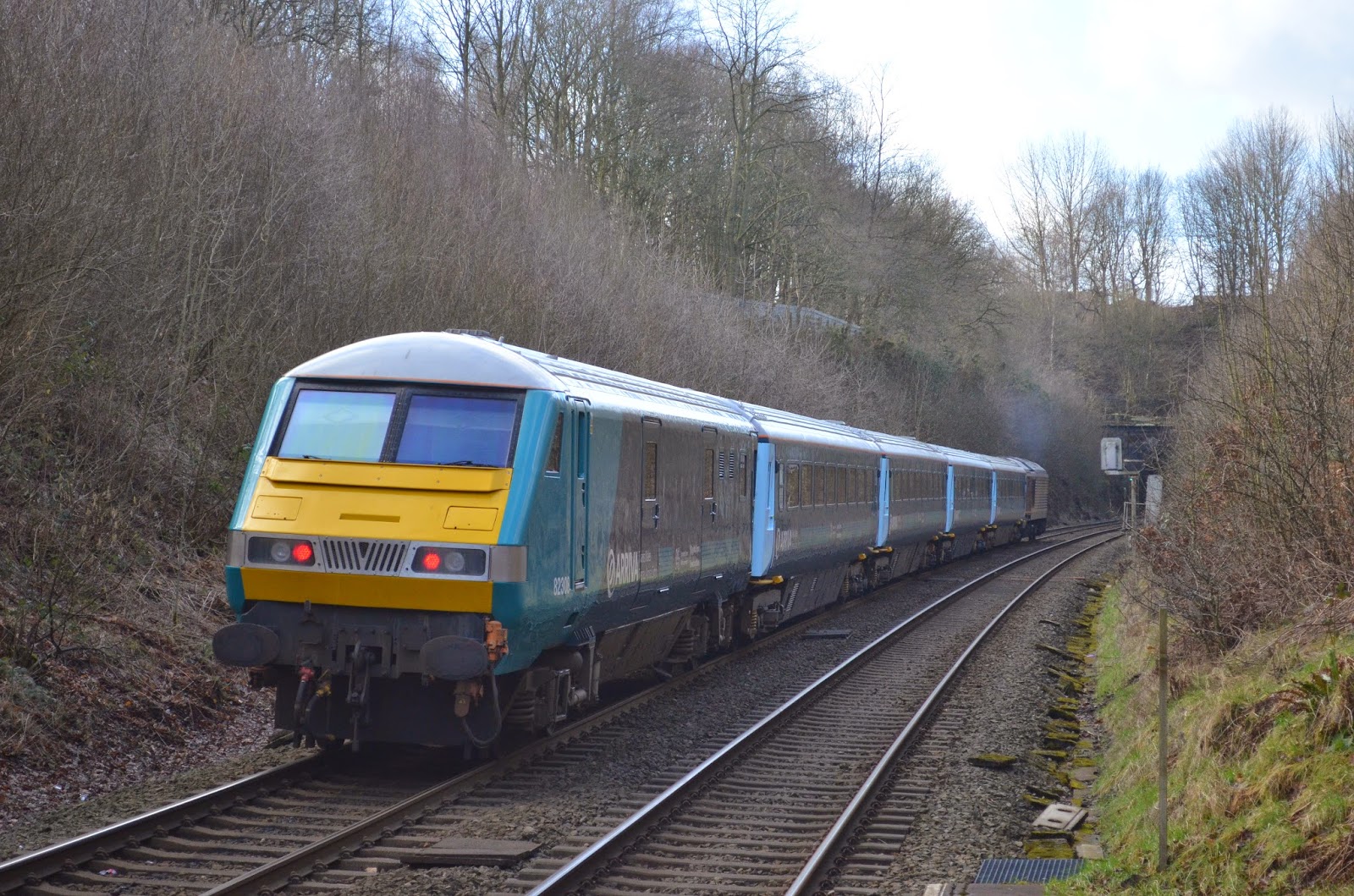 Back to Halebank and the Fiddlers Ferry-Liverpool Bulk Terminal coal empties was in the hands of DB Schenker's 'Super 60' 60044. A new loco to me, I was aware it was on the circuit but hadn't had an opportunity to get out and see it for myself. Until now... 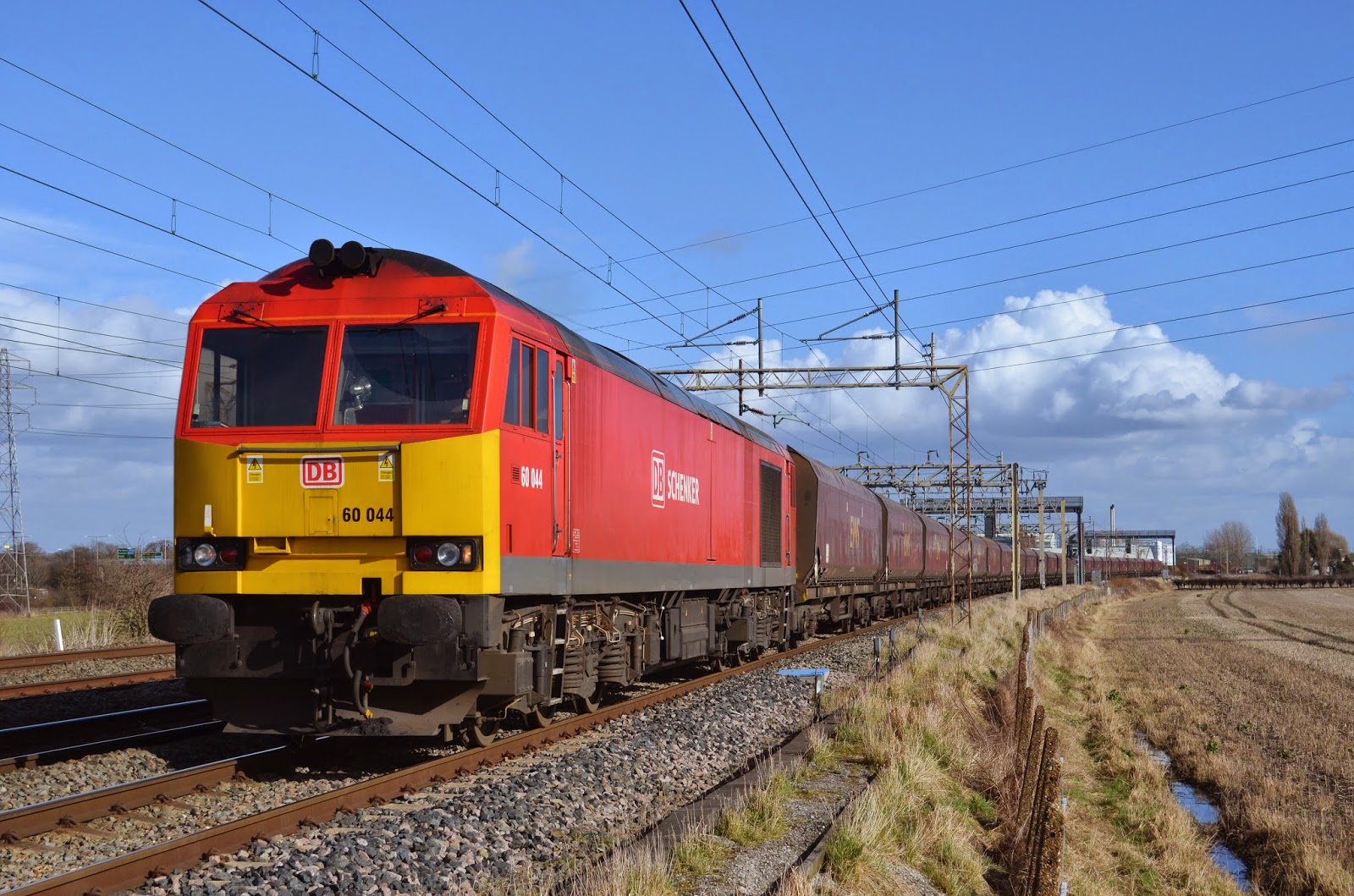 Another loco that had been in the area over the last week was GBRf 66721. The loco carries a special livery commemorating the London Tube and was on the Liverpool-Ironbridge Biomass circuit along with 66708 and 66713. Today the loco was forming the 4F61 Ironbridge-Tuebrook Sidings empties. After weighing up where best to go for it, Acton Bridge, Earlestown, Warrington Bank Quay, Winwick Junction, I decided due to the time of day, position of the sun, and the disappearing light that Rainhill station would be best (and most convenient!). 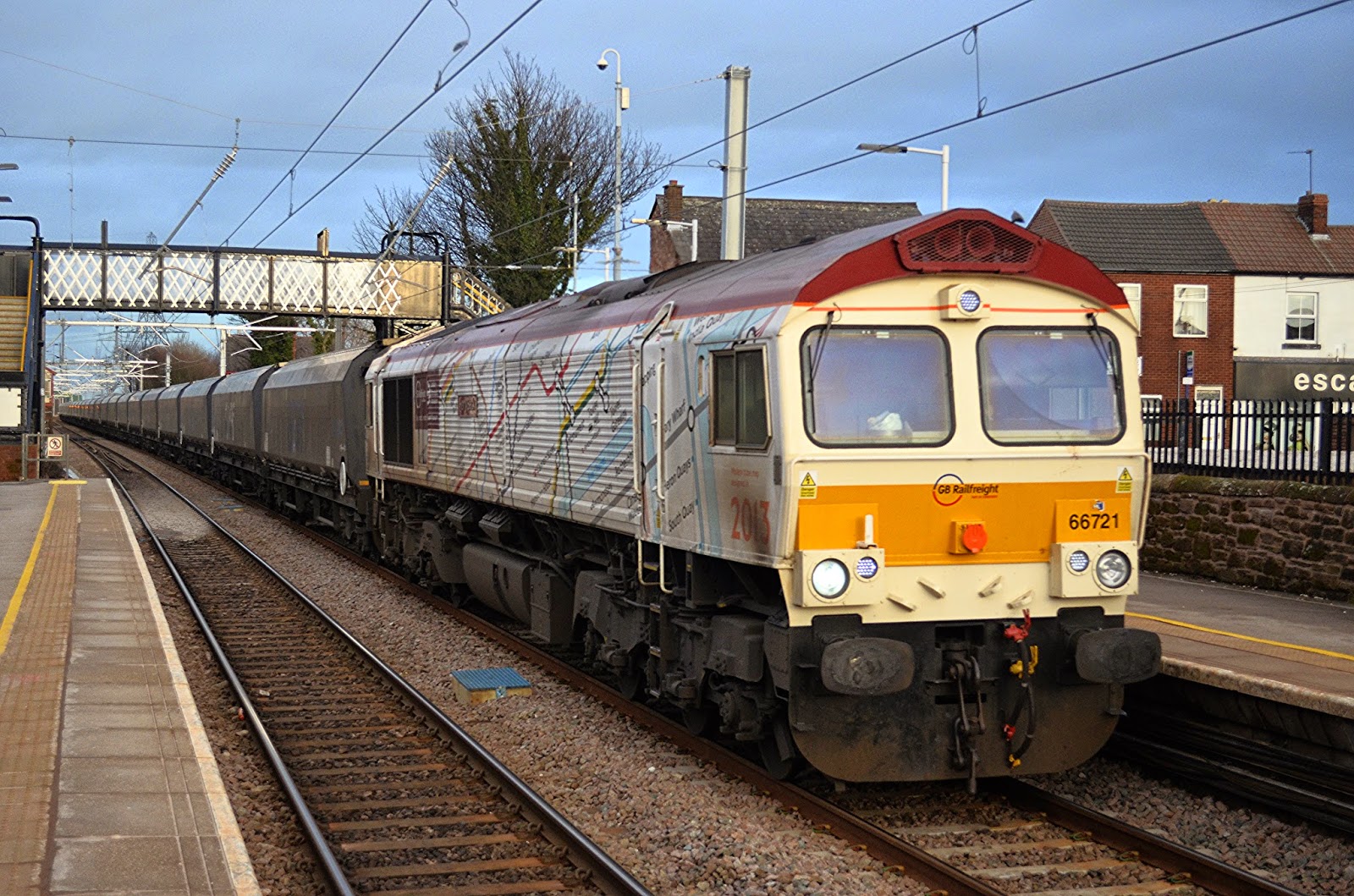 Also noted on the day, was Northern Rail 319364 on test between Crewe and Liverpool South Parkway. The loco carries a sleek version of Northern Rail livery with 'Northern Electrics' branding. A lot of promotional material for 'Northern Electrics' has started to appear on board trains and stations however Northern have no idea at present when exactly the electrification works will be finished allowing the introduction of these units on services between Liverpool and Manchester. 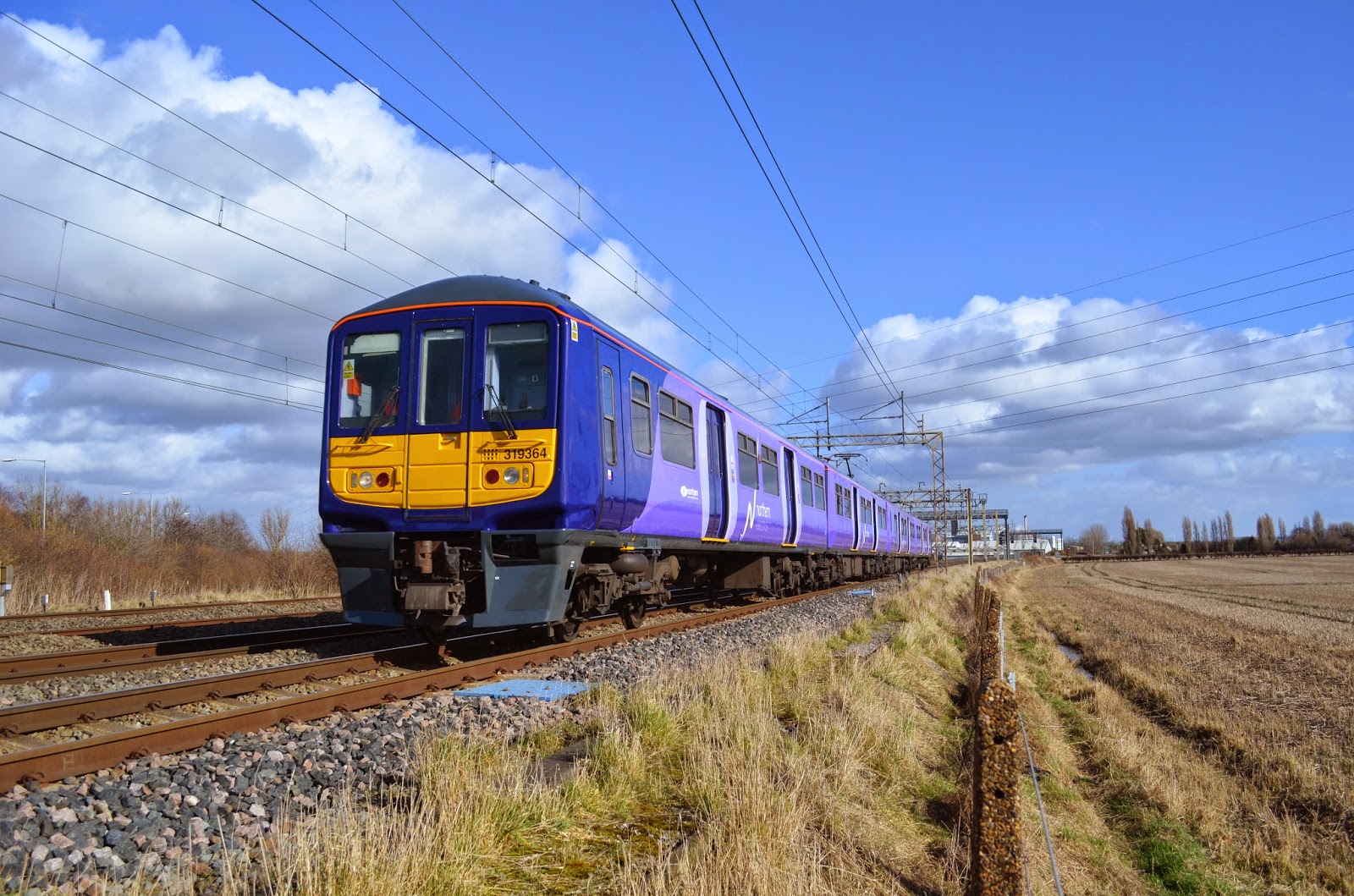