The Liverpool Rail Scene - A year on

After having lost a little bit of interest in the rail scene, it was the arrival of 08924 at Garston terminal in February 2014 that changed that. The transfer of the car contract from DB Schenker to GBRf may have stopped daily DB Class 90's to Garston, but the sight of the humble Class 08 shunter making a comeback in South Liverpool more than made up for that. I grew up with the sound of Class 08 shunters everyday, living in front of Allerton depot. With the closure of the depot back in 2009, the sight and sound of these machines going about their business, which I had took for granted in later years, came to an abrupt end. The arrival of 08924, a former Allerton engine brought it all back, the thrash and the growl out of the 0-6-0.  But this was just the start, I didn't realise how interesting and varied the local freight scene had became. As well as GBRf operating the car traffic, they also have a biomass contract running several trains daily between Ironbridge Power Station and Liverpool Bulk Terminal. Later this year, they will also start running trains to Drax as well as introducing a fuelling point at the Bulk Terminal.
DB still have a presence in the area, with the Fiddlers Ferry coal circuit as well as the thriving Halewood Jaguar traffic that runs to Southampton. DB currently provide traction for Network Rail test trains (as well as DRS). Freightliner have perhaps the largest influence in the area, with the Freightliner terminal at Garston generating plenty of intermodal traffic, and also the yard at Garston for which is used by their Heavy Haul division with the trains operating on the Ellesmere Port and Fiddlers Ferry circuit.  Ditton Yard just outside of Liverpool is busy with both DB Schenker an Freightliner.

So one year on from picking up the camera once more, I've been fortunate enough to capture some interesting movements. This post is just to highlight the variety on offer with the local scene, long may it continue!

Below are a selection of my favourite pictures.

47790 is started up at Liverpool Lime Street after arriving on the rear of the Northern Belle from Edinburgh to Chester on Saturday 09/08/2014. 57307 'Lady Penelope' was at the other end of the train, marking the start of the changeover to Class 57's on the Belle. 47790 is now, 6 months on, still soldering on and is still putting in regular shifts on the Belle, despite now being classed as the 'Stand by' loco. Considered to be probably the most reliable 47 in the DRS fleet, the loco is currently in Norwich for the Anglia 'Short Set' workings. 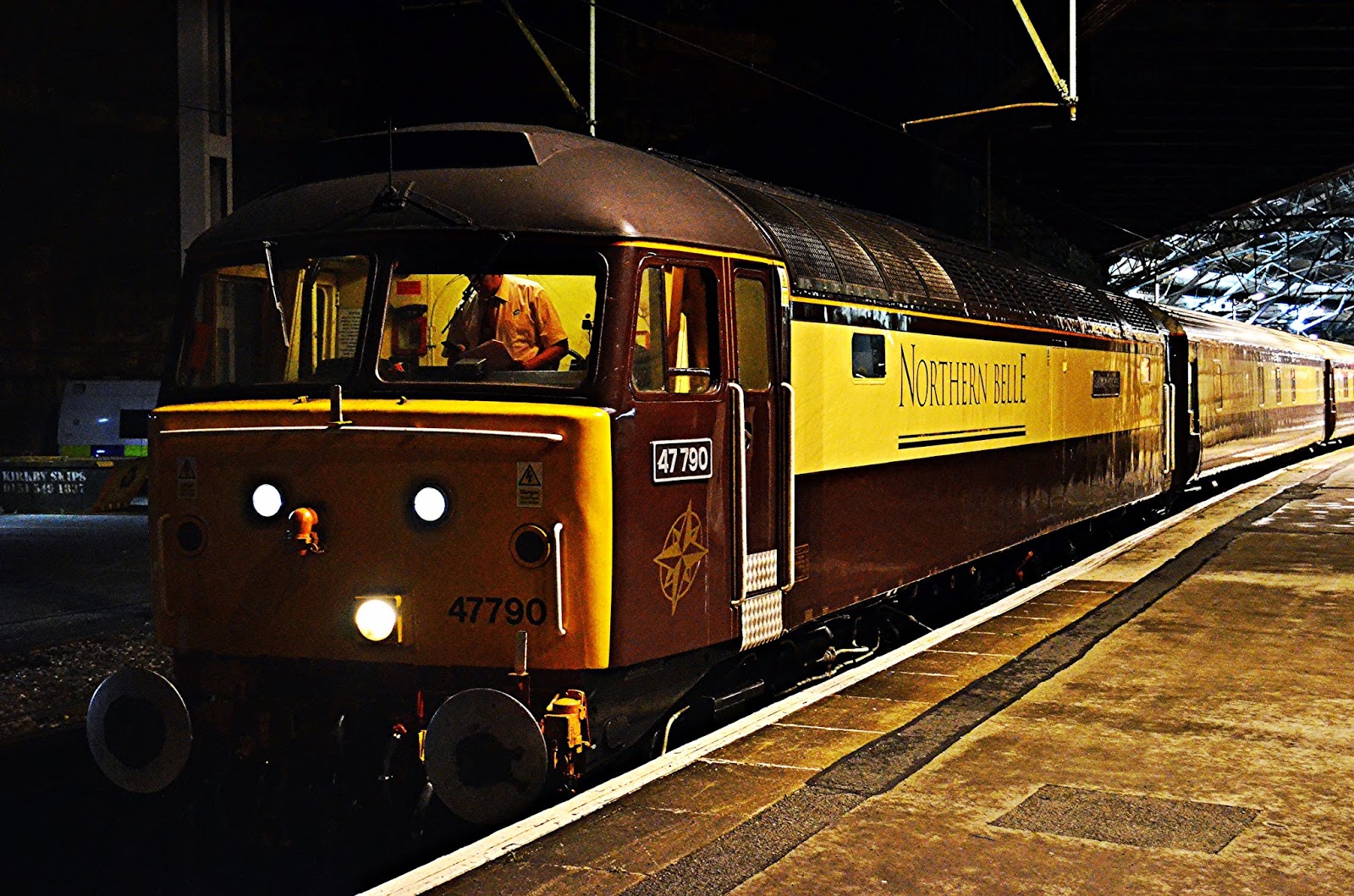 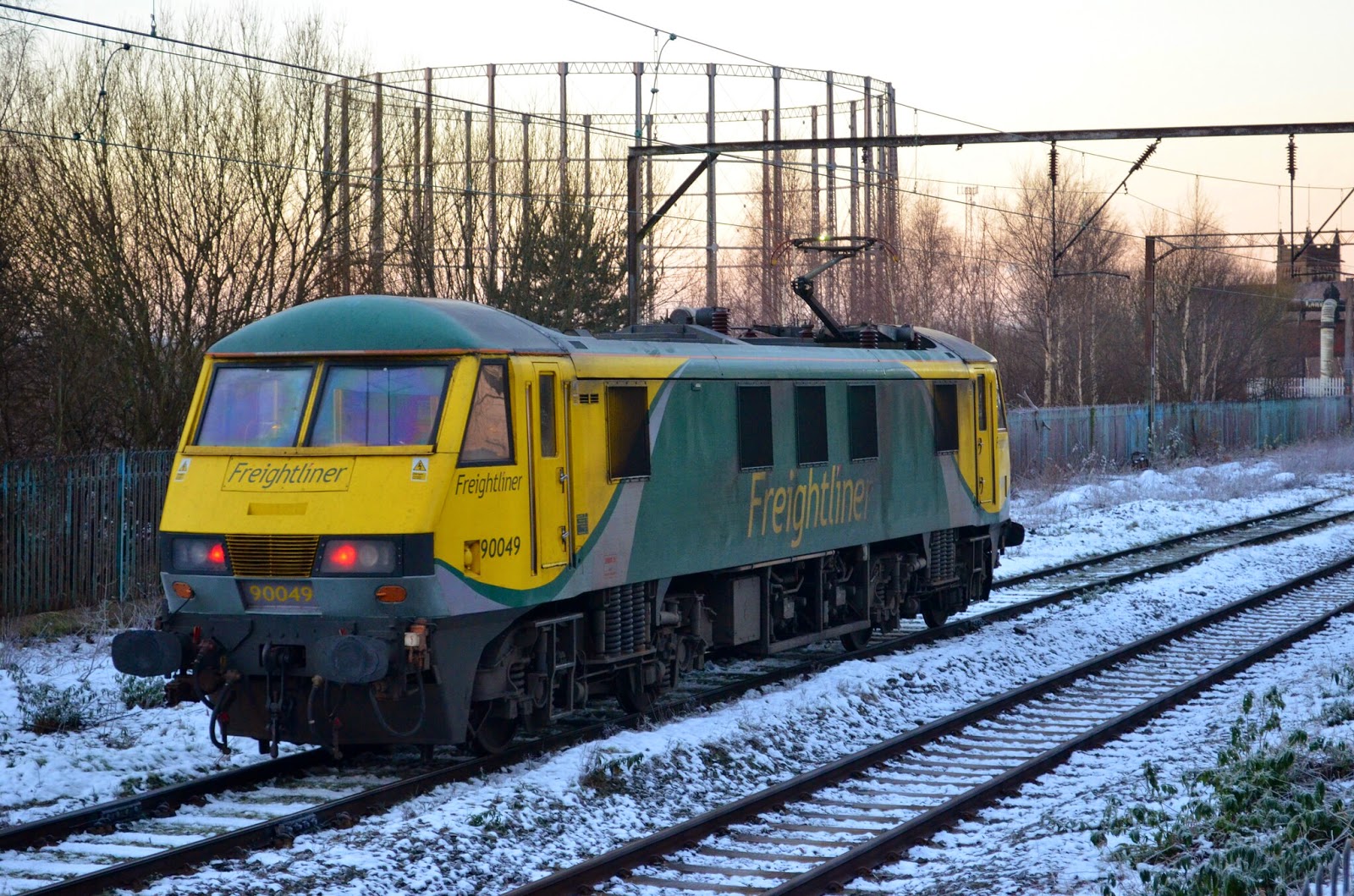 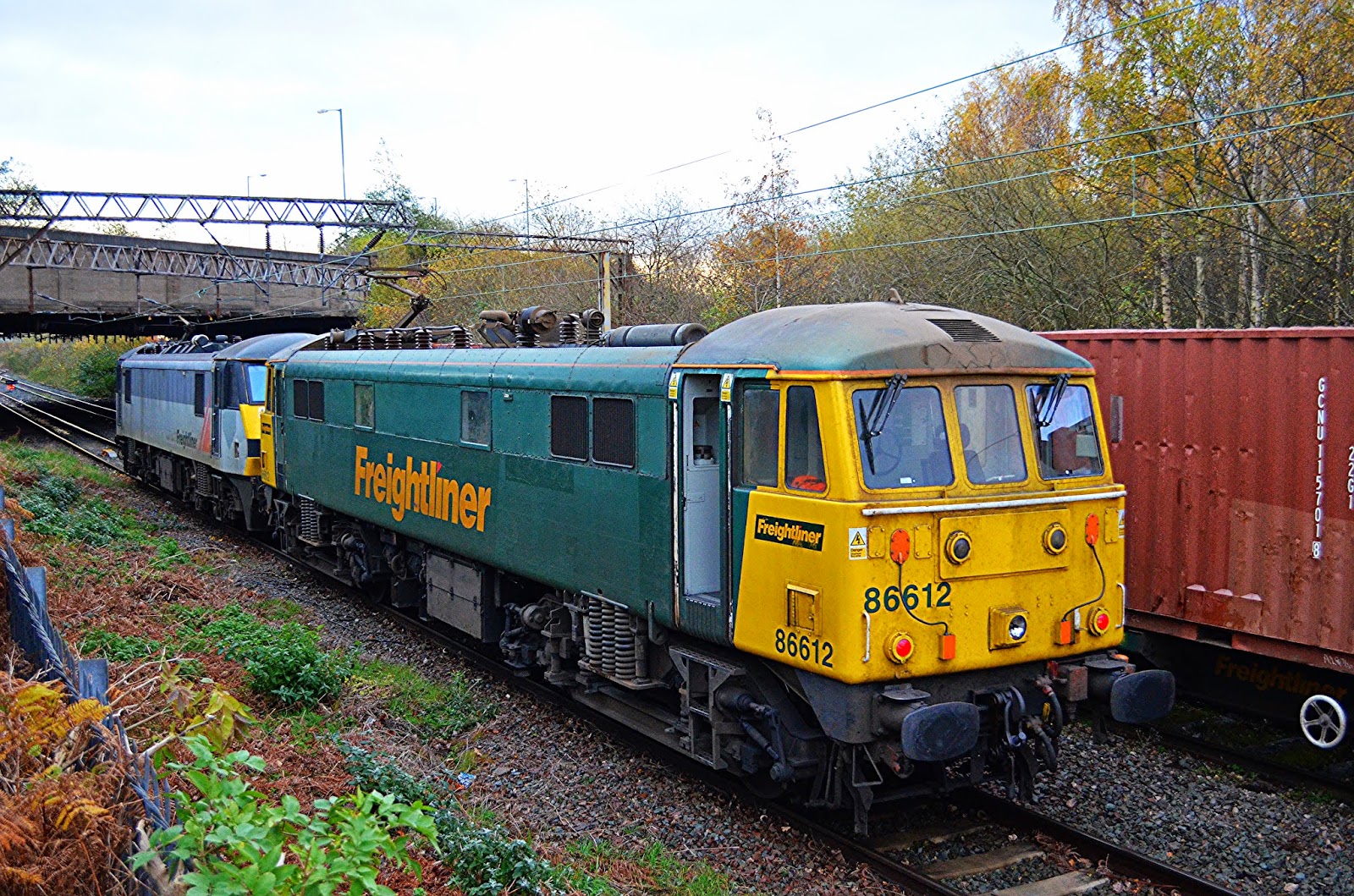 08924+66760 sit in the sidings at Garston Car Terminal. Whilst the shunter is well over 50 years old, this particular 66 was just months old when pictured on 19/01/2015. The loco had just worked up from Dagenham with a train of Ford vehicles which is normally in the hands of a Class 92 electric, hence the need to have a diesel shunter on site. 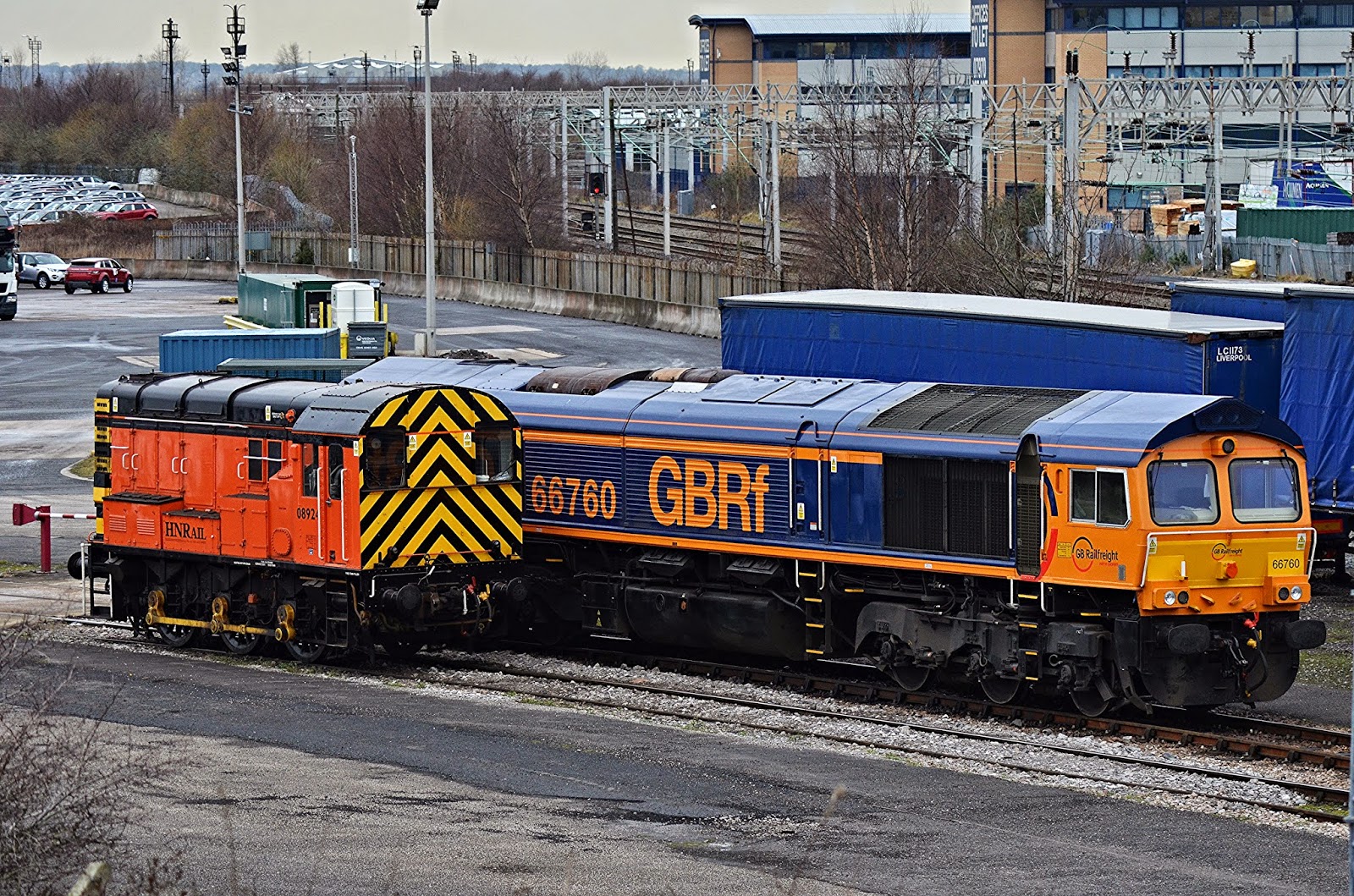 A few weeks later, and after a brief return to Class 92 haulage, 66709 'Sorrento' is the weeks loco for the 6X41 00:32 Dagenham Dock to Garston Car Terminal. Currently carrying a special livery that celebrates the 10 year partnership between GBRf and Mediterranean Shipping company (MSC). 66709 is no stranger to special liveries as prior to its current application, it carried a variation of GBRf livery for 'Medite'. The loco will work back south with the empties on 6L48 15:49 to Dagenham Dock. 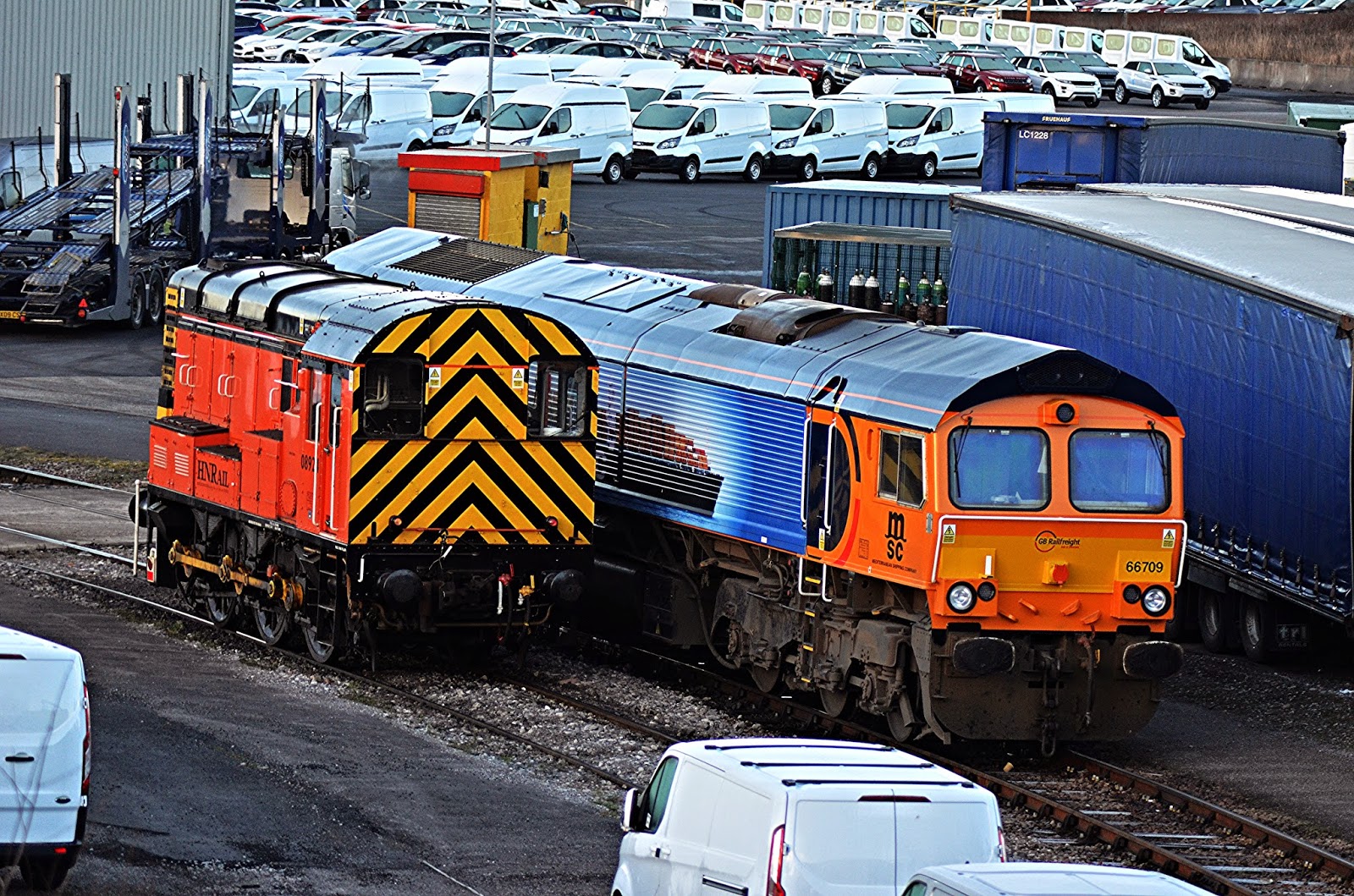 08924 is hard at work on Bank Holiday Monday 05/05/2014 bringing out the empty wagons after unloading and forming the train for the return to Dagenham to do it all over again the next day. This picture was taken from the road bridge on Speke Hall Avenue. The stretch between Liverpool South Parkway/Garston FLT and Halewood is particularly difficult for photography with the lineside being occupied by warehouses and factories and the next open station being Runcorn. As ever with this hobby, being imaginative you can find and create opportunities. Google Earth/Maps is actually a really useful tool here. Long live the Gronk! 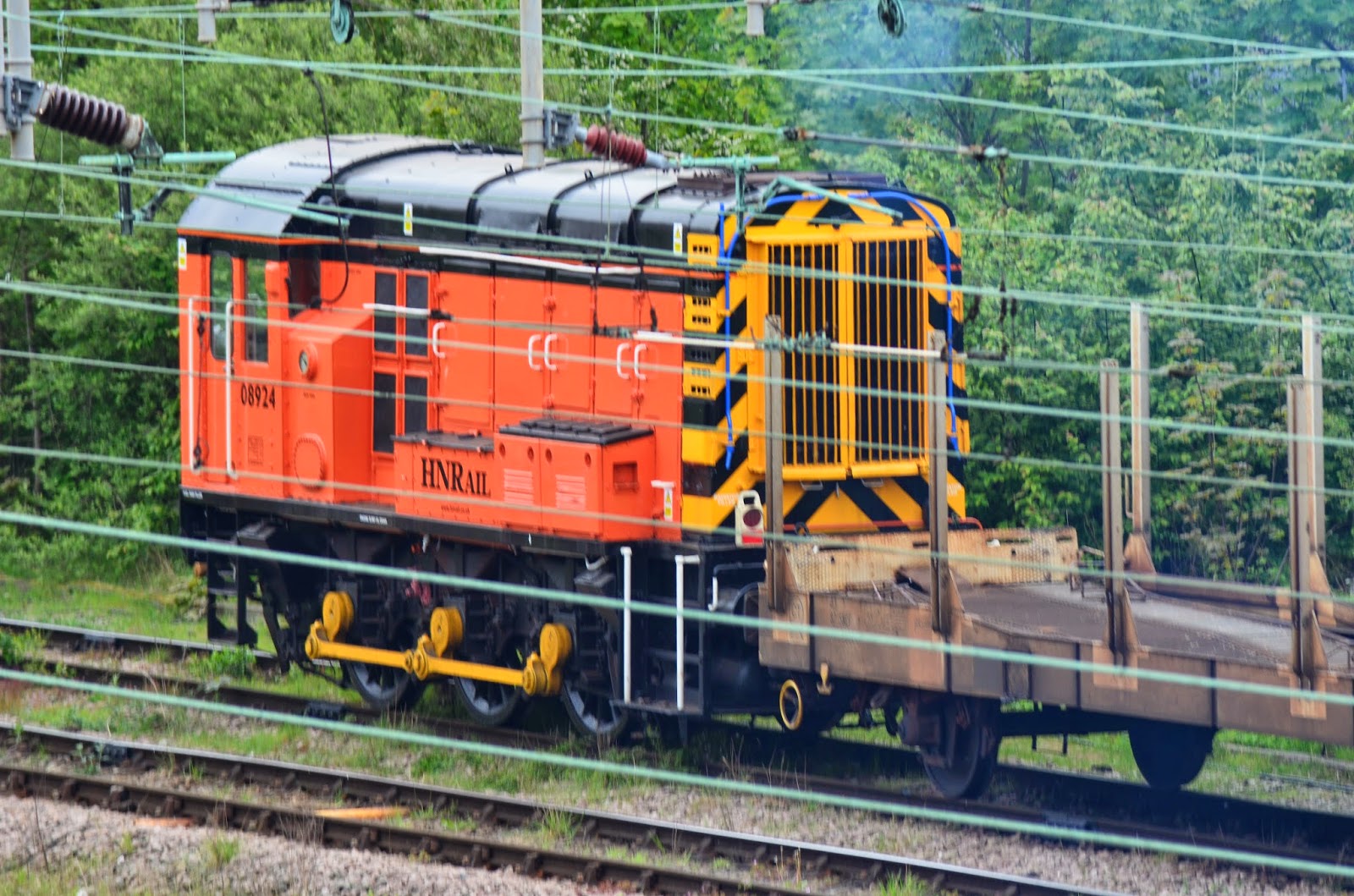 On Friday 19th September 2014, 57009 powers through Halewood with an evening Northern Belle charter from Chester to Barrow via Liverpool LS (and return). 57302 'Chad Varah' was on the rear of the train. I've always had a soft spot for the 57/0's ever since they would scream through Allerton/Liverpool South Parkway stations with Freightliner workings from Seaforth....those were the days. 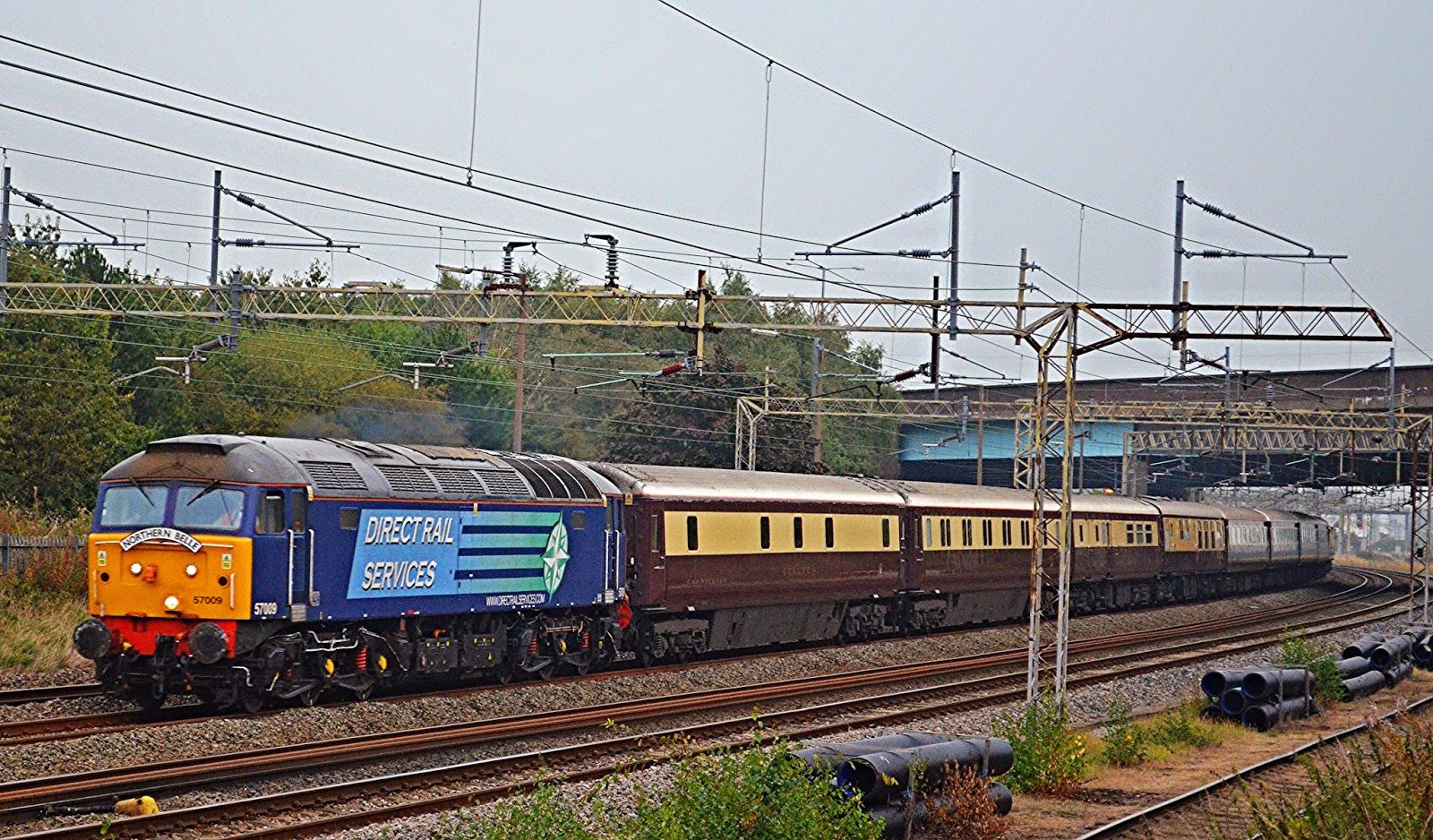 90046 passes through Halewood working the 4K64 11:50 Garston FLT-Crewe Basford Hall liner on 09/09/2014.This service runs Monday-Friday at this time and slightly earlier on a Saturday, and is booked for Class 90 haulage. In reality, any class of locomotive in the Freightliner Intermodal fleet can turn up on the job. 90046 along with 90047 are probably my most photographed Class 90's (if not locomotives) 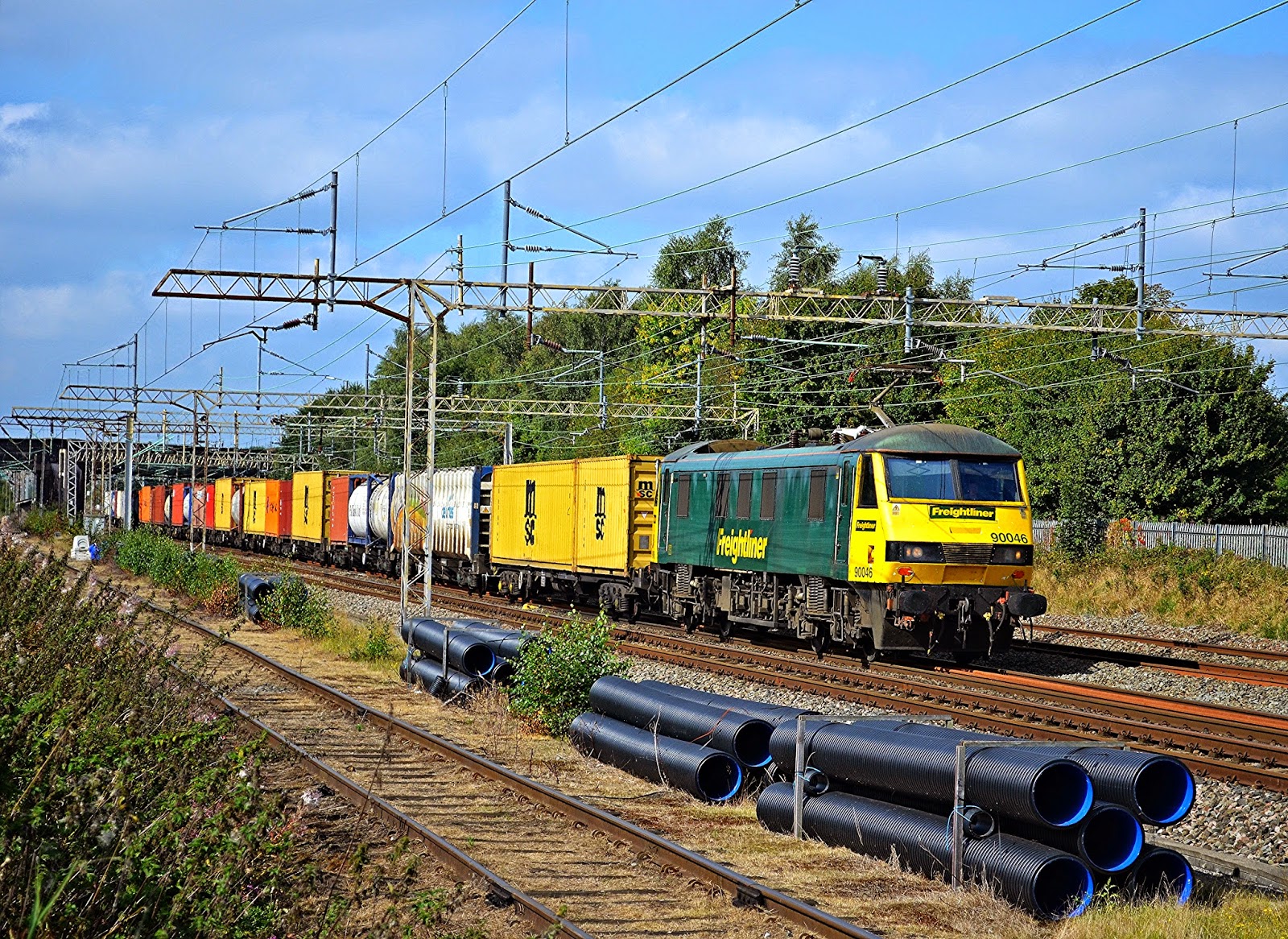 90049 powers out of Ditton Reception Sidings with the 14:03 Ditton O'Connor-Felixstowe North FLT. Normally in the hands of a pair of Class 86 locomotives, this diagram has seen 90's being used more regularly as of late. I had been waiting sometime to get a Powerhaul liveried Class 90 at Ditton for sometime! 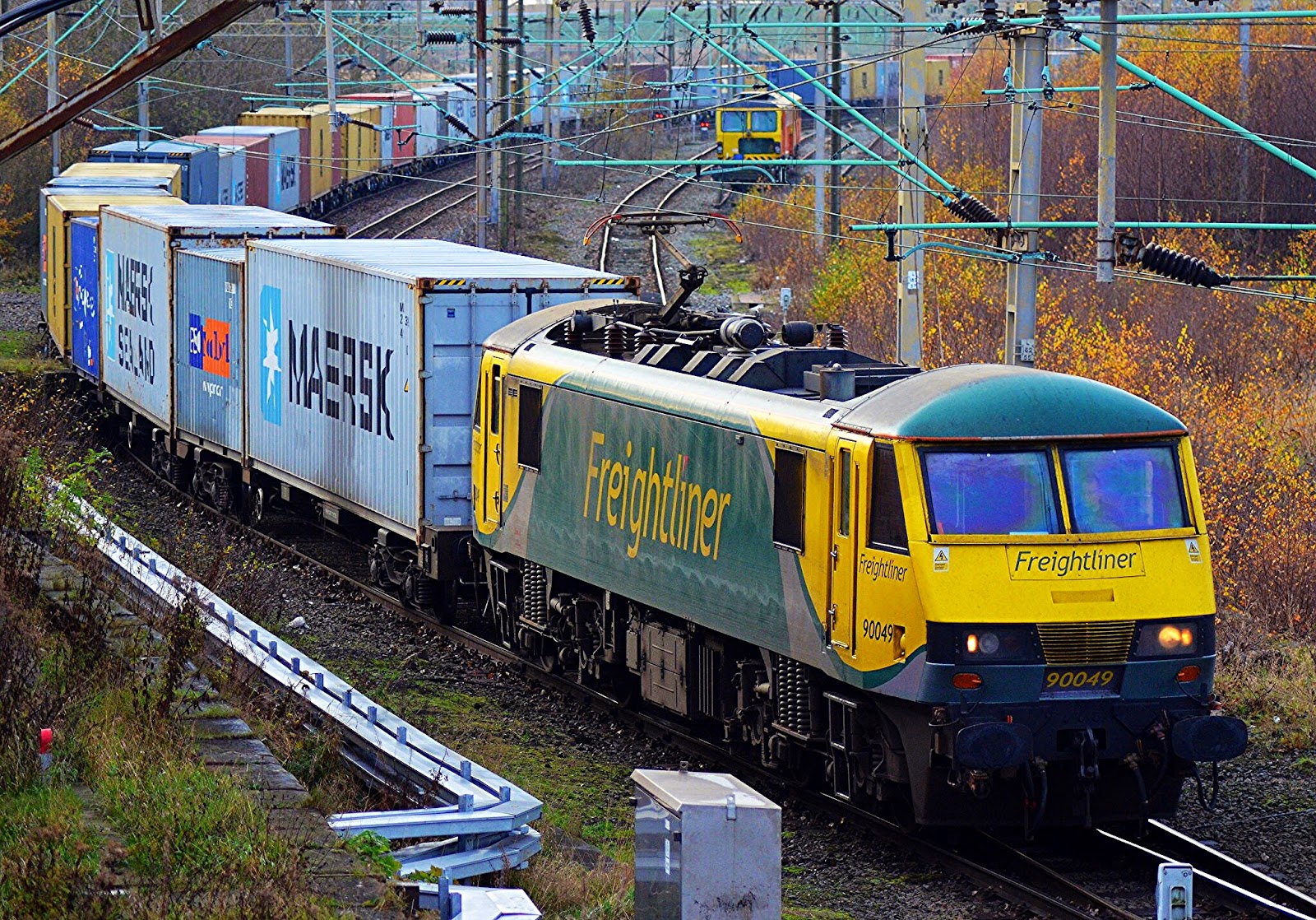 66192 drags 92016 in to Ditton Reception sidings from the Foundry Lane Complex. The 92 had brought service 6M14 north from Dollands Moor earlier that morning carrying coiled aluminium. The service originates from Germany and makes its way across DB's European network to the Channel Tunnel, Dollands Moor and then on to Cheshire. It is believed the aluminium is then forwarded by road to Carlisle. The return working to Germany (6O16 to Dollands Moor) is also loaded. With the small complex at Foundry Lane not being electrified, the use of a class 66 is needed to shunt the train in and out of the yard. The 66 runs light from Warrington Arpley to the headshunt at Ditton where it stables until the 92 arrives. The 92 runs right up to the 66 and the whole train is coupled up and pushed back in to the terminal. This is the reason why the pantograph is down in this picture. A minute or two later and the Pan is up, locos uncoupled and the 92 is ready to run light to Crewe EMD. The 66 either returns light to Arpley, or can run light to Halewood Jaguar to take over from one of the locos on that circuit that may require an exam/maintenance. As of late, this traffic has been in the hands of Class 66's to/from Dollands Moor. This is believed to be down to DB Schenker looking to send more Class 92's overseas due to the expensive operating costs of the Class 92's. They are rumoured to be getting replaced with Class 90's (in pairs in some cases). I live in hope that a 90 (or even a pair) turn up on this working in the near future. 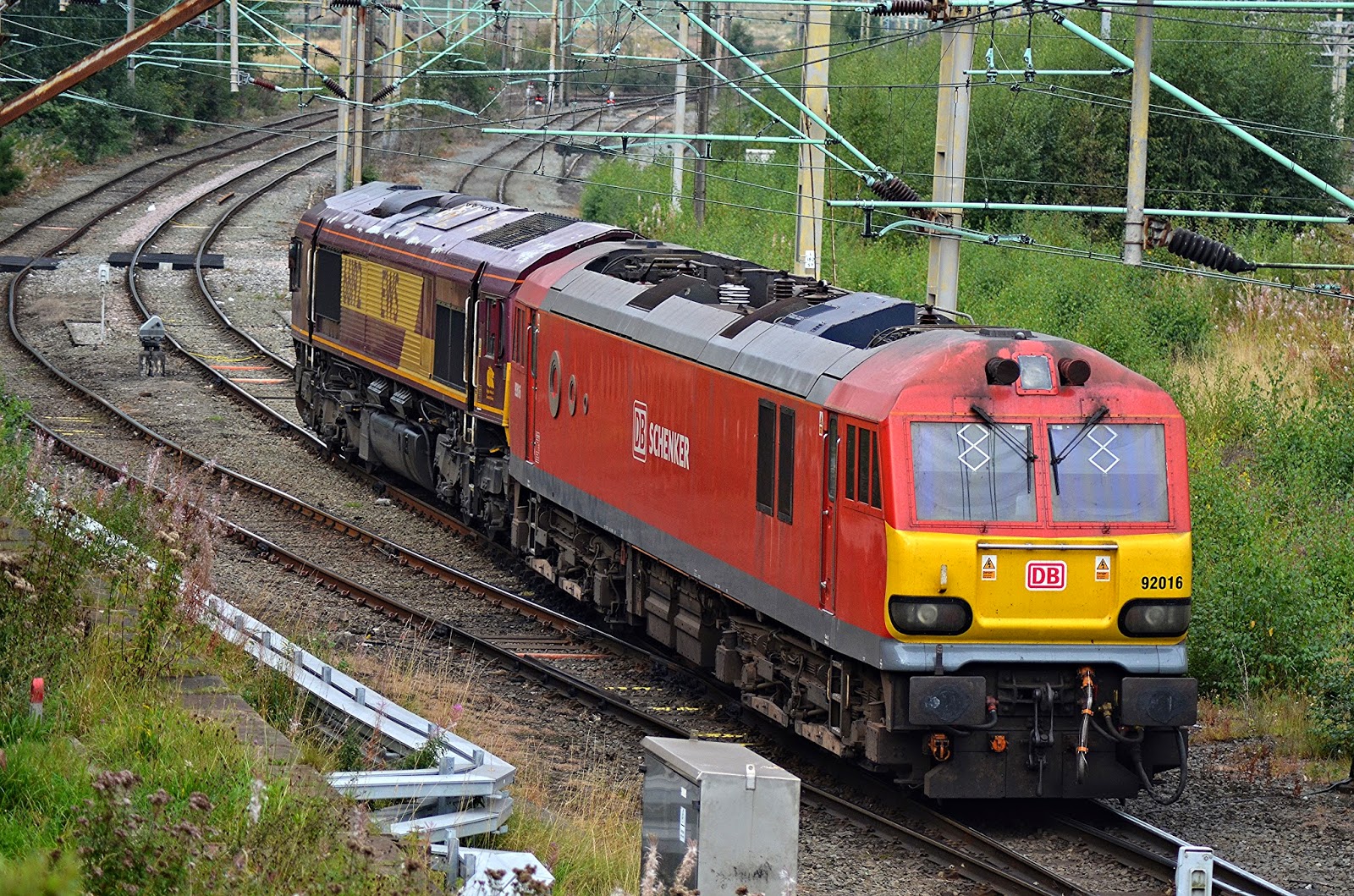 66504 at Ditton Reception sidings after shunting the 4L92 service out of Ditton FLT. I wrote about this service in more detail on this blog a couple of weeks back here 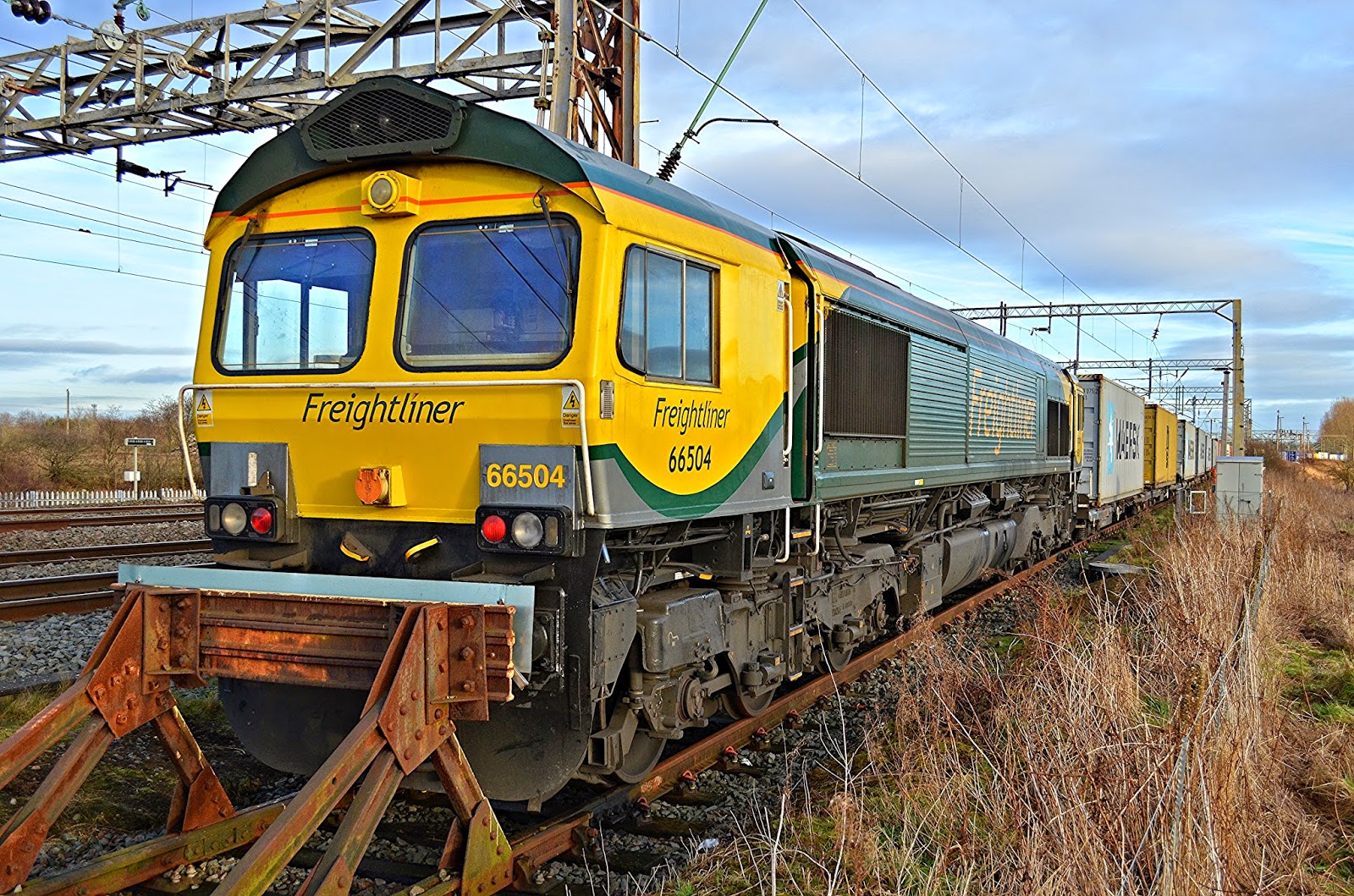 In a scene that would more likely be several years ago, two shunters in Warrington Yard at the same time. 09106 on the left sits between duties whilst 08623 is at the tail end of its C Exam. A few days later and 09106 was sent up to Knottingley and 08623 became yard pilot at Arpley. Again, a few weeks back I spoke about these shunters on this blog here 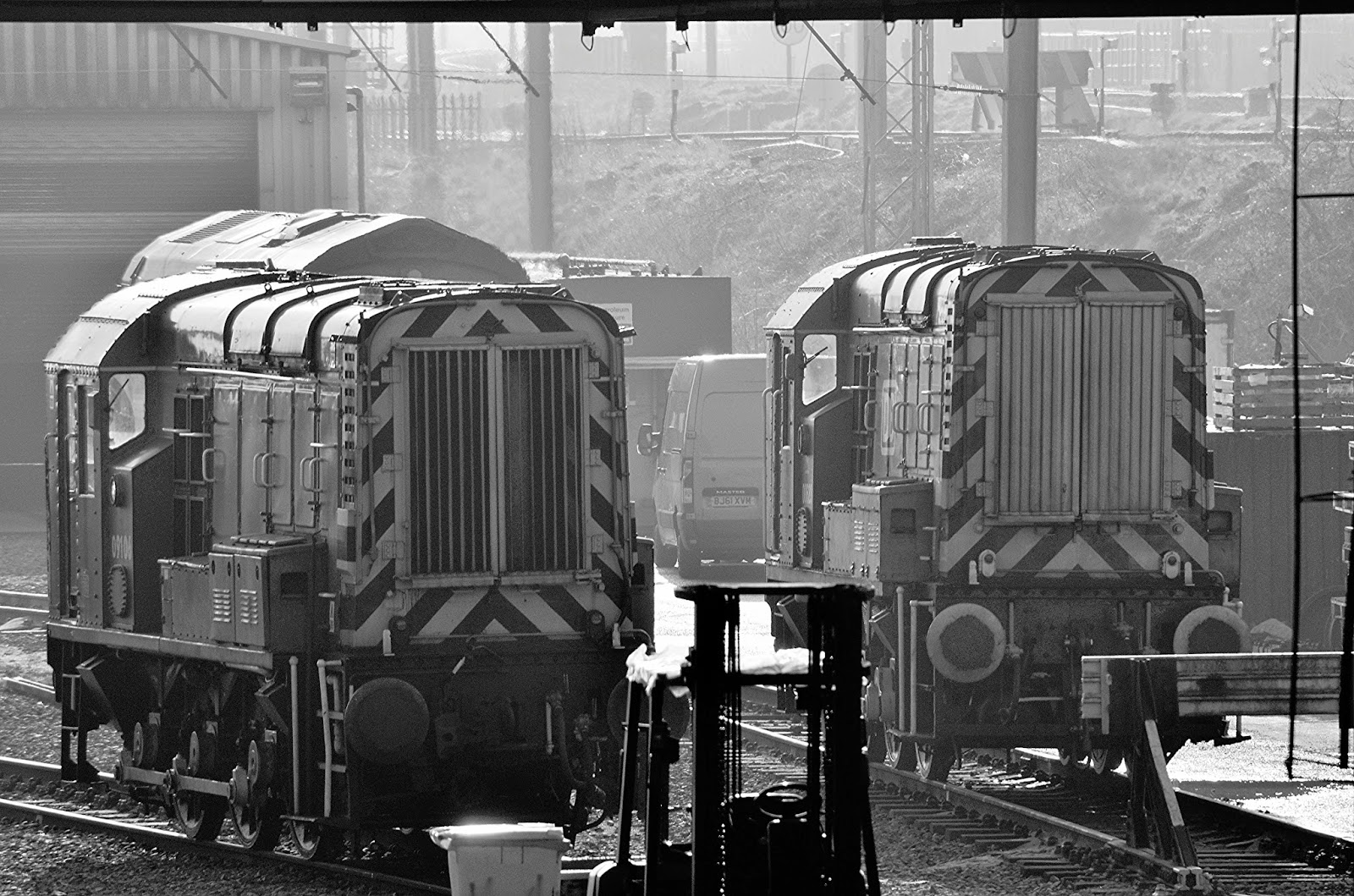 60024 is shunted into the servicing shed at Arpley by 09106. Although a rather large oil stain is visible on the side of the loco, it must not have been too serious as it was back in traffic on the Fiddlers Ferry circuit just the next day. 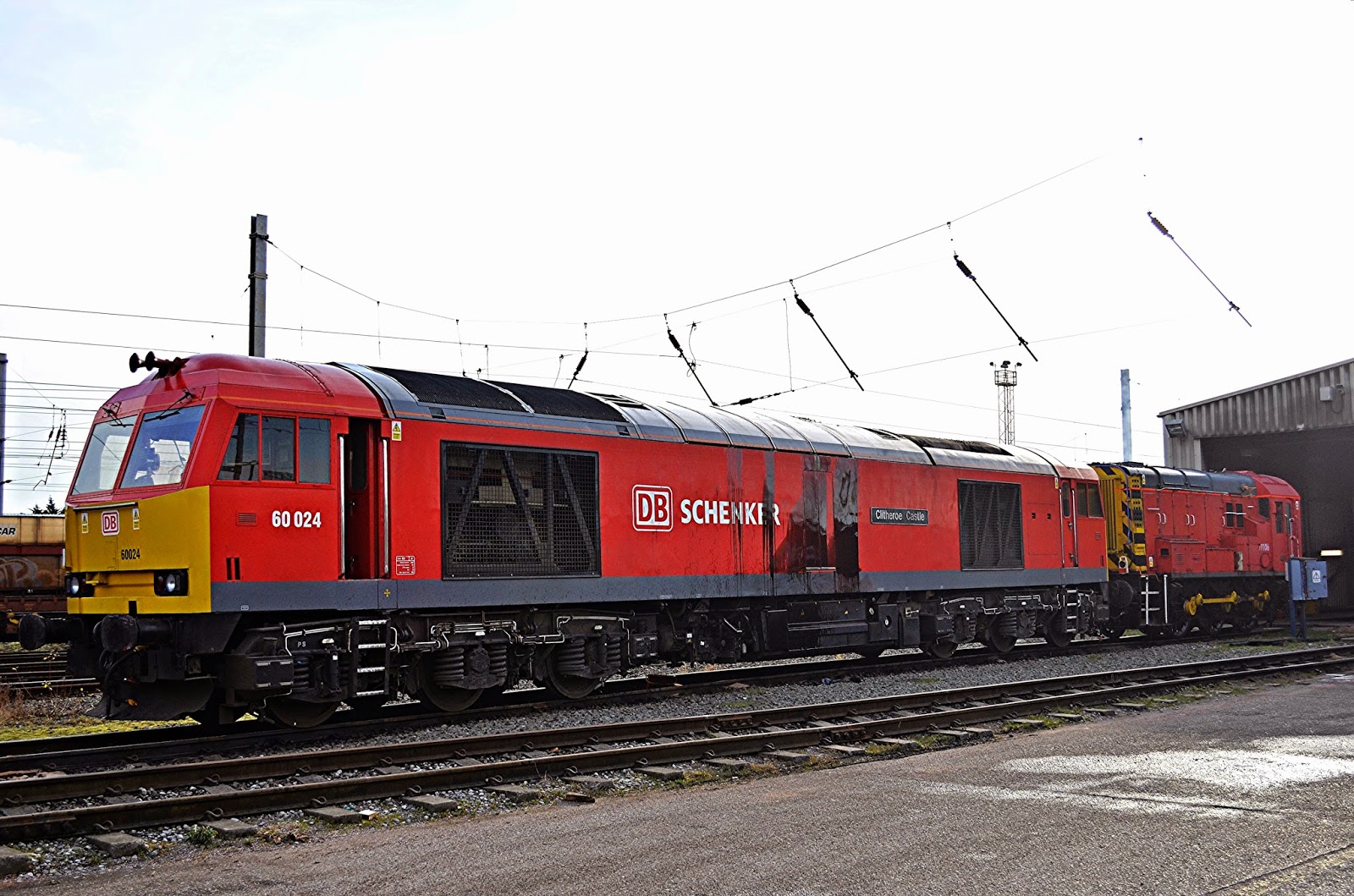 08623 sits in the yard at Arpley after taking over pilot duties from 09106 after its departure to Knottingley that morning. 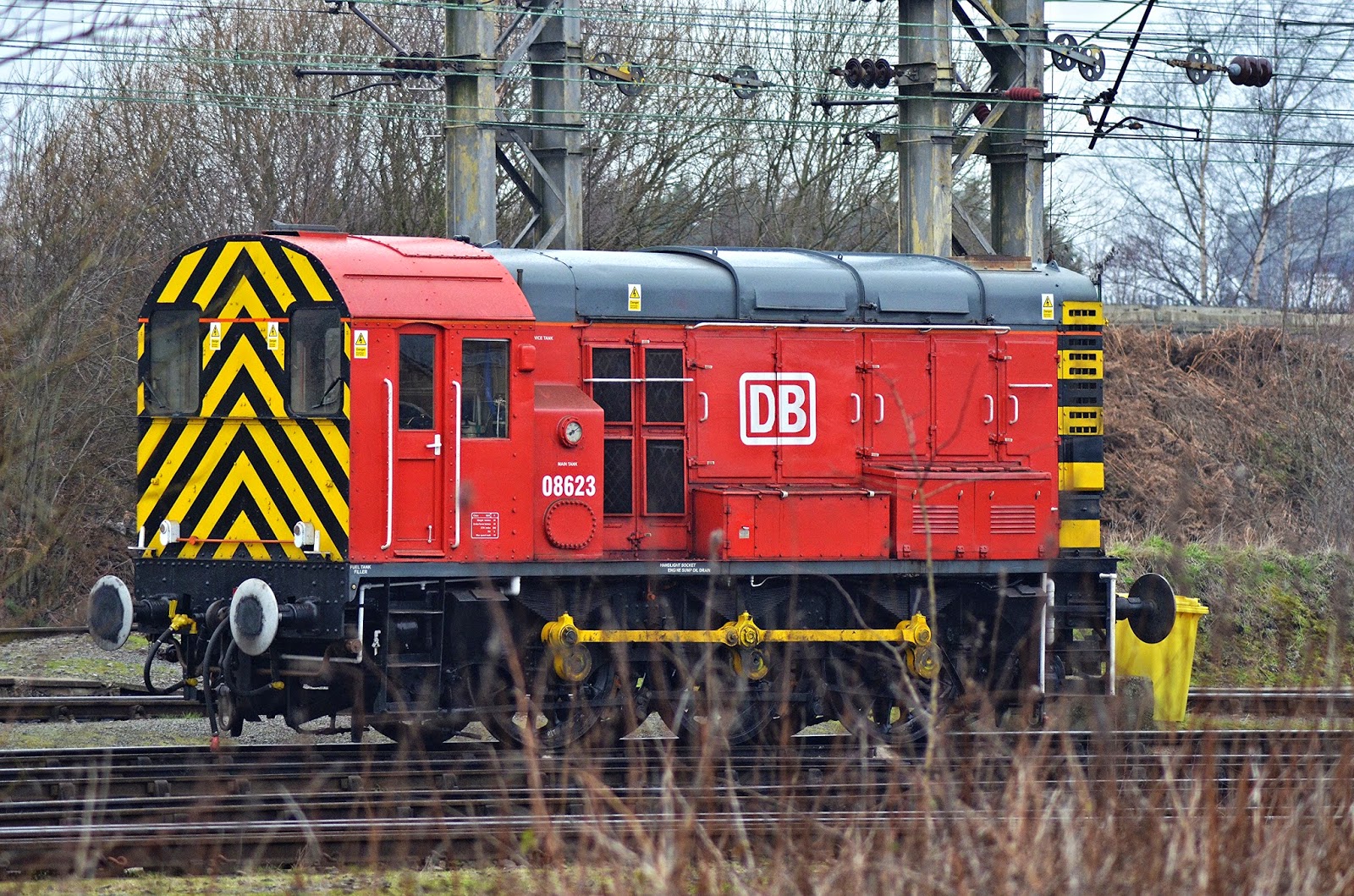 90034 powers south with the 4M25 Mossend-Daventry intermodal. Despite the rather uninspiring livery and branding, this service is DB Schenker operated and is normally a Class 92 turn. The 90 was thrown on at the last minute after the booked 92 couldn't be woken up that morning. It returned north later on with a lighter loaded northbound working. The date was 16/01/2015. 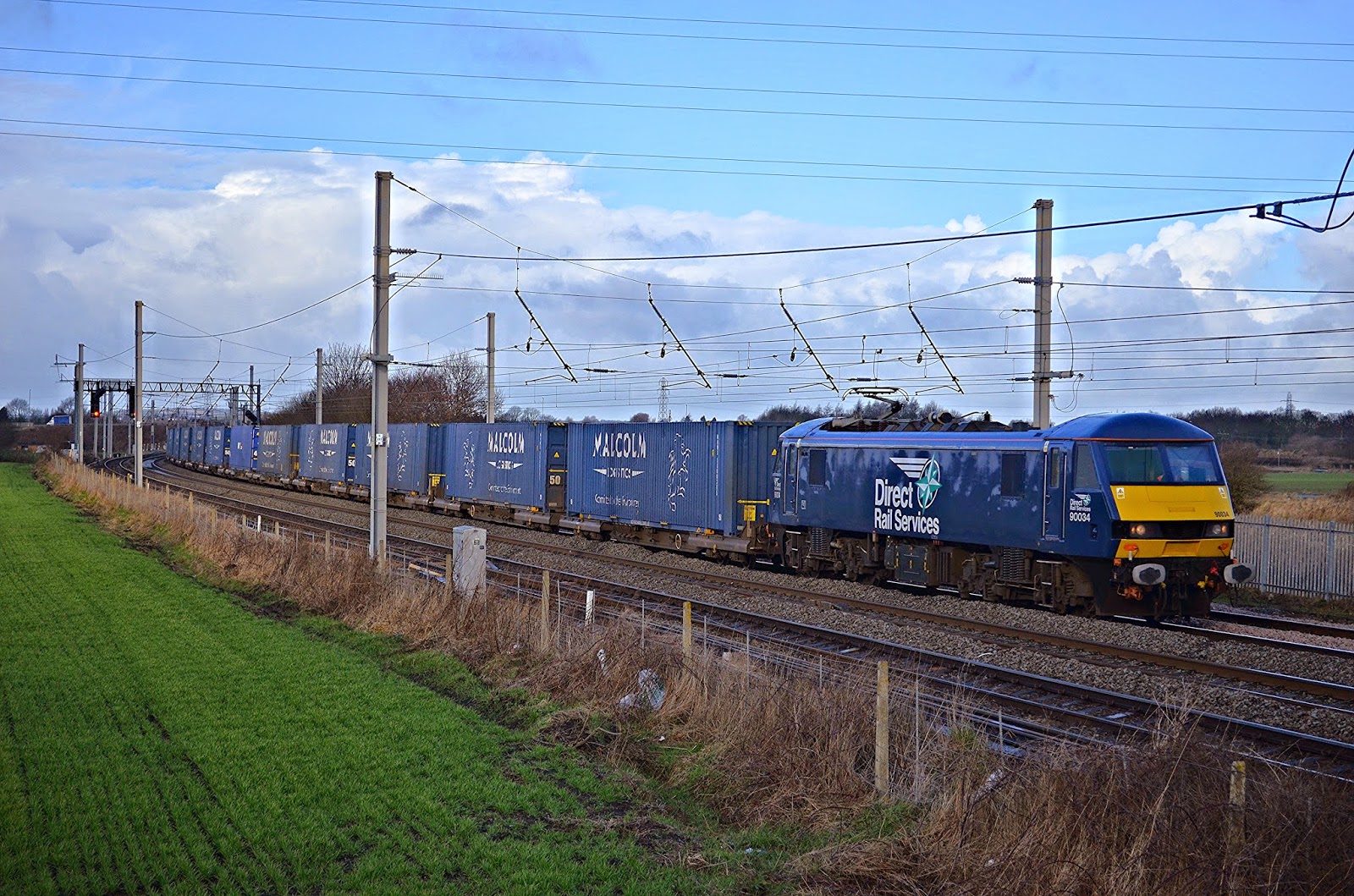 Recently reinstated 90035 slows as it nears journeys end (Warrington Royal Mail Terminal). This was an extra service that ran during the month of December with the extra mail generated during Christmas season. The result was quite pleasing personally despite the dull conditions of 22/12/2014! 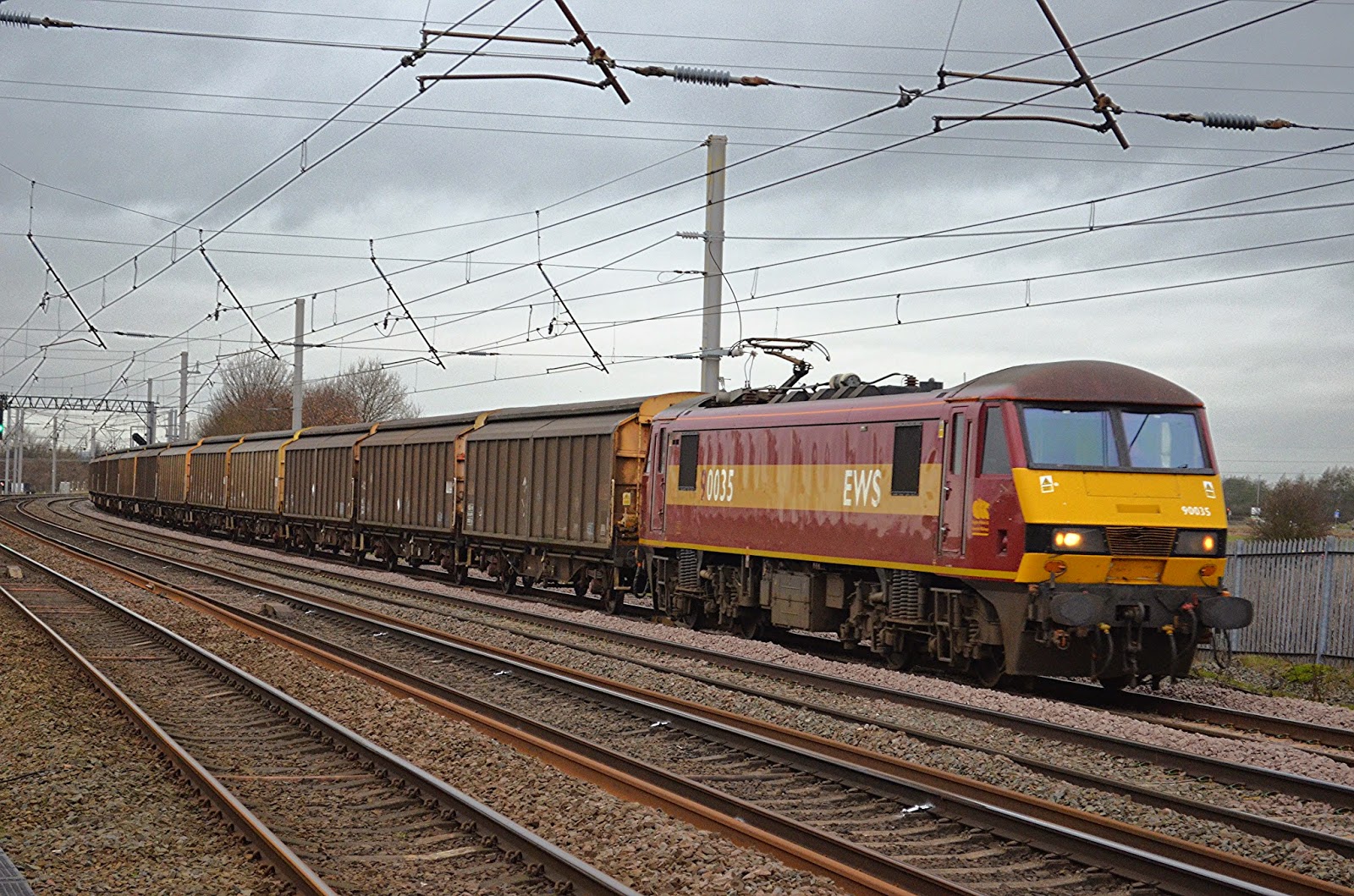 90043+90045 roar through Winwick with the 4M01 Coatbridge FLT-Crewe Basford Hall on Saturday 20/09/2014. Again the light wasn't ideal but the sight of a pair of Freightliner 90's on the front a train makes an impressive sight no matter the conditions. 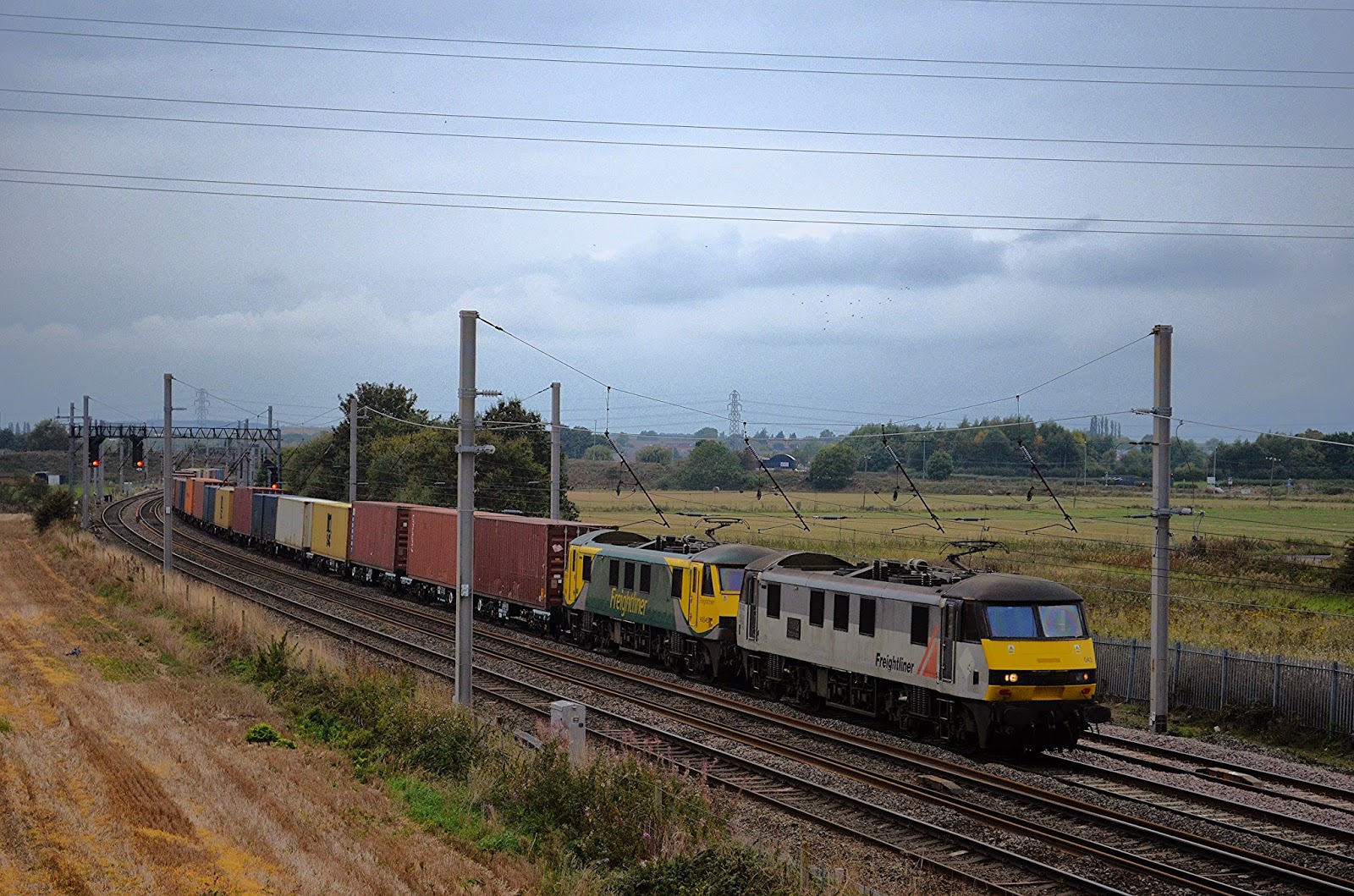 Now my pictures aren't the best in the world, and aren't necessarily for the purist. Photography is new to me and I'm learning everyday. I take these photos for the enjoyment of the hobby first and foremost and to be honest I'm thrilled with some of my more recent work.

Other good reference sites for the hobby in the area are 8A Rail and wwwagons (for daily loco lists as well as lots of information posted daily).
Realtime trains is an essential tool now and can provide live information on freight and passenger services.

As ever, thanks for reading!