Warrington received another Class 08 shunter on Monday 23rd February in the form of veteran 08428. Moved down from Carlisle by road, it had been stored since the ill fated 'DB shunter cull' in summer 2014. Despite being officially stored, and reportedly having some kind of engine issue, it had continued to see some use in Cumbria. The removal of the loco sees the yard left with no Gronk on site, so marshalling duties will be in the hands of whatever is there and available, at least for now... 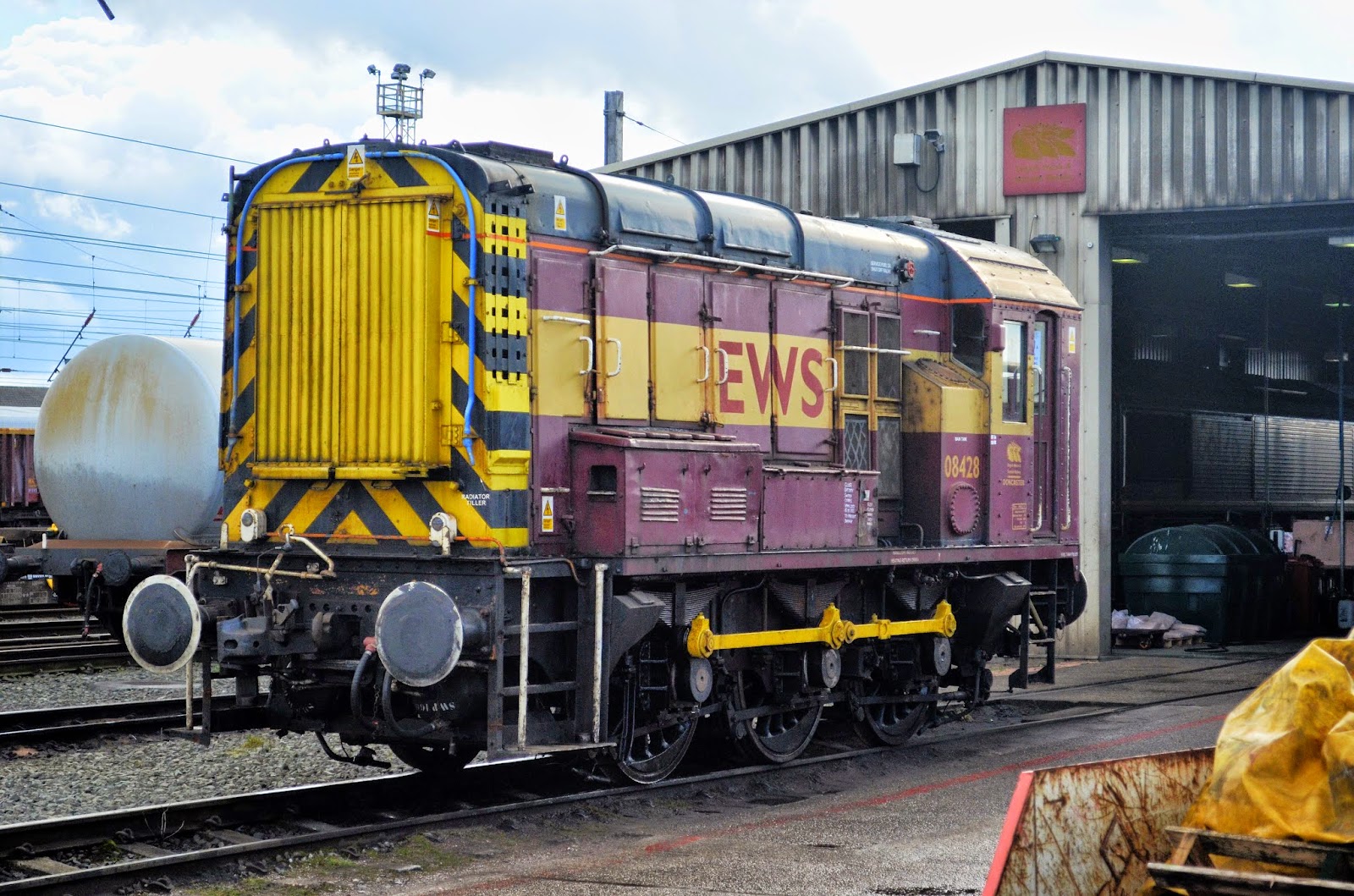 I was fortunate enough to be able to photo the loco sitting outside the front of the shed by the gate, indeed i was lucky as about 20 mins after I had arrived and taken my photos, it was moved in to the shed for repairs to start/continue. Warrington Arpley is primarily a servicing shed, essentially providing quick, light maintenance to keep the fleet of mainline locos going. As such, these are the priority and the nature of this means that the shunters or locos requiring slightly longer repairs, can be shifted in and out of the shed as required with maintenance done in bits and spells. Locations such as Warrington and Knottingley are starting to see shunter repair work coming their way as it is said that DB have essentially banned shunter maintenance from its premier depots at Crewe EMD and Toton, with space and staff hours allocated to its core mainline fleet. This is believable as DB now have a dedicated team monitoring what every mainline loco is doing on the network at any time, and as such if a loco is sitting on a shed not out earning its keep, there has to be an answer for it, all in the name of efficiency.

Having a quick look at the loco there are a few interesting things with it. This particular loco is fitted with both auto coupler and instanter couplings. It also has wooden doors, as fitted to all 08's from new up until 08705 which was the first to appear with steel doors. A couple of technical points as well regarding this loco, the biggest being that it was never fitted with an electric fuel pump which means that prior to use, fuel has to be pumped manually by train crew. The loco is also fitted with TPWS, and did indeed see mainline use when allocated to Knottingley a couple of years ago.

I'm still not entirely sure what the extent of work that it is to receive here at Warrington, whether it just be engine repairs or more. My feeling is that in terms of the old exam system, Warrington is capable of anything up to a C exam. Indeed this work was undertaken on 08623 recently and afterwards, 09106 departed Arpley for a D exam at Knottingley.

08428 underwent a D exam at Bescot last year before being finished of at Toton (prior to the 'ban'). It was also intended to repaint it in to DB Schenker Red/Grey as per 08623/632/907 and 09106 but the loco was pressed back in to use before it was done. From a personal point of view I'm rather glad it retains EWS livery. This livery was, besides BR Blue/Green/Black probably the most common carried by shunters but with the active fleet dwindling in numbers, you have as much chance of seeing a DB red one as you do EWS these days (barring stored locos obviously). Hopefully it'll be up and running soon and no doubt will be tested within Arpley yards.

In other news my personal favourite Class 08, 08737, is back in use at Crewe EMD as depot pilot although is still officially classed as stored. The loco arrived in mid 2013 for a D exam that in the end was not sanctioned and it joined the line of stored shunters at the site. I had returned to attempt a photo of it a few months ago and noticed it was no longer in the stored line. A few enquiries were made but nothing conclusive emerged. That was up until the 'Tugging Shedmaster' tour that ran through Crewe EMD. Amongst the photos of Class 90's and 92's I noticed a photo of 08737 at the Chester end of the shed, the photo gave me the impression it was being used, as it was stabled ahead of an active Class 90 on one of the centre roads outside the shed. Again I enquired with my contacts and it appears to shunter is indeed being used as one of the depot pilots. The loco is being used as mentioned earlier at the Chester end of the shed whilst 08495 (again officially stored) appears to be the Crewe end pilot. The pciture I am referring to is not mine, but can be viewed here

The loco has been a long term North West resident with long spells at Allerton and Crewe. In the 90's the loco received Railfreight Distribution livery which I have always thought was one of the best schemes applied to any loco. In the early to mid 2000's when I was starting to become more interested in the hobby, the loco as apart of EWS's WSNW pool based at Allerton and could be found on Allerton or at Trafford Park or Warrington. I was extremely lucky in 2003 to have my work experience placement at EWS' Allerton TMD arranged by a family friend who was a fitter at Allerton. This was an opportunity that I will always be extremely grateful for and was probably the best 2 weeks in work I have ever had. At the time, 08737 was outstationed at Trafford Park and along with fellow Trafford Park resident 09020, was due an exam. For small routine exams (A+B) these were done out 'in the field' so again I went along to the Euroterminal at Trafford Park.  At this point the loco was had its RFD branding crudely painted over with black paint on one side and was starting to look scruffy. But on the inside, there was nothing wrong with this workhorse. In the years afterwards it made it back to Allerton when due bigger repairs. EWS had a major shunter cull in 2004 and 08737 was stored, the official/technical reason for storage was an 'Oil Leak'. The loco languished outside at Allerton for months, but was never touched for parts as such. It was not uncommon at Allerton (similar to how Crewe are using shunters at the moment) for shunters that had stood outside out of use for months on end, albeit with minor faults, to be brought in for quick repairs and to be used as Depot Pilots. 08737 is an example of this as well as 08802,08925 and 08946 to mention over the years. This was the case with 737 and it did see use as pilot. In late 2005, a major overhaul was sanctioned and this heavy work was undertaken at Allerton. This also saw the loco receive a repaint in to EWS colours, but the revised 'More yellow' version which saw the yellow/gold band extend to the top of the bonnet doors. After repairs the loco was reinstated and was based on Allerton for some time before being moved on, again seeing use at Trafford Park amongst other places. With EWS moving away from regional allocations and being more central, in recent years the loco has stretched its legs working in the North East, South Wales and the South West.

With that history lesson out of the way, The Chester end of Crewe can be quite hard to photograph. Passing trains are a possibility depending on whether anything is blocking the view. There was also a view from a fence that is in the perimeter of a nursing care home but this has recently been taken over and the owners have installed new 'Private Land' signs on the car park so isn't advised. I'm kind of hoping that with the issues being seen with the DB fleet, and the shortage of serviceable 08's, 737 may eventually get back out. It appears to have been an extremely reliable and dependable machine over the years and surely should be authorised this exam! :-p Joking aside, never rule anything out with this one. 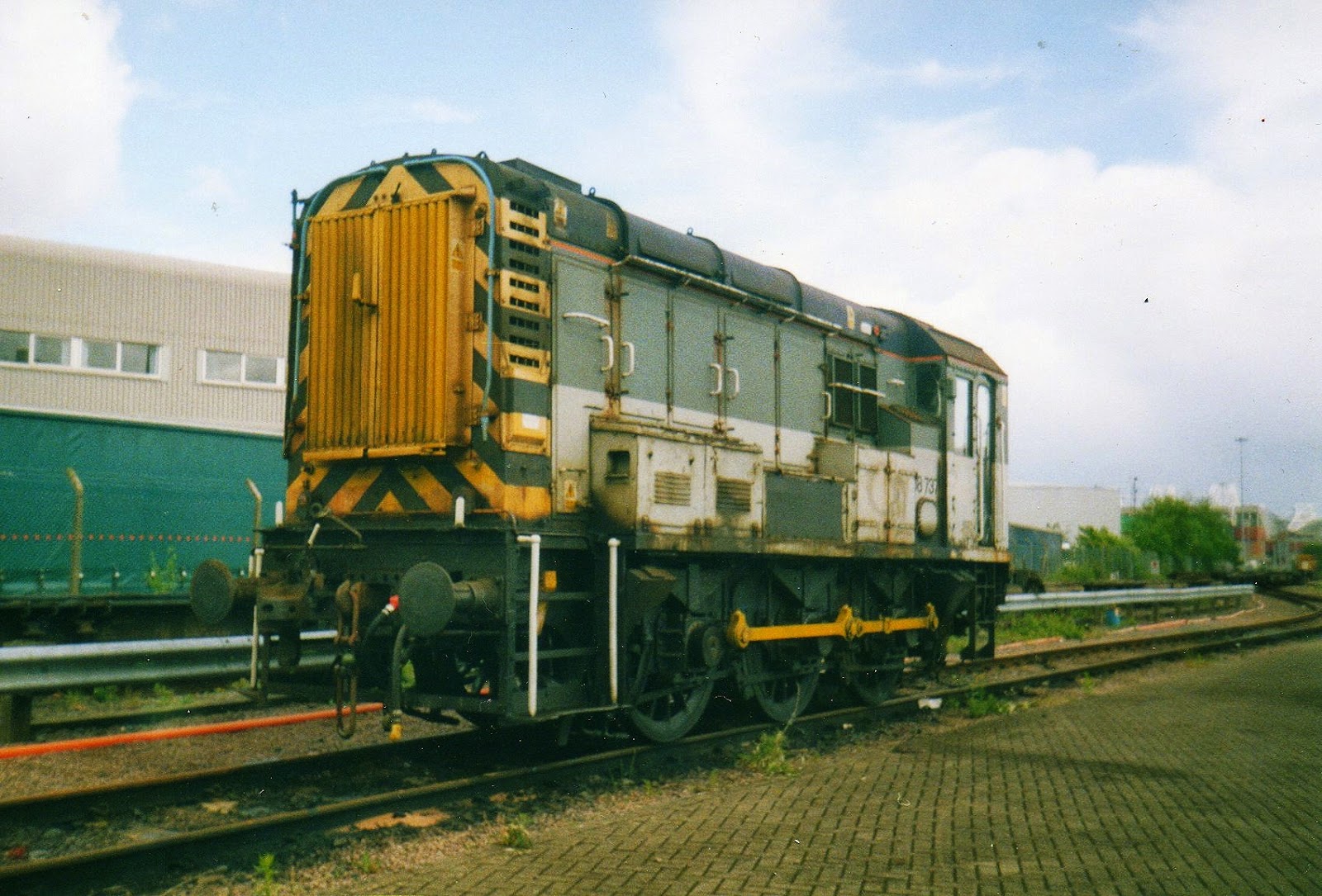 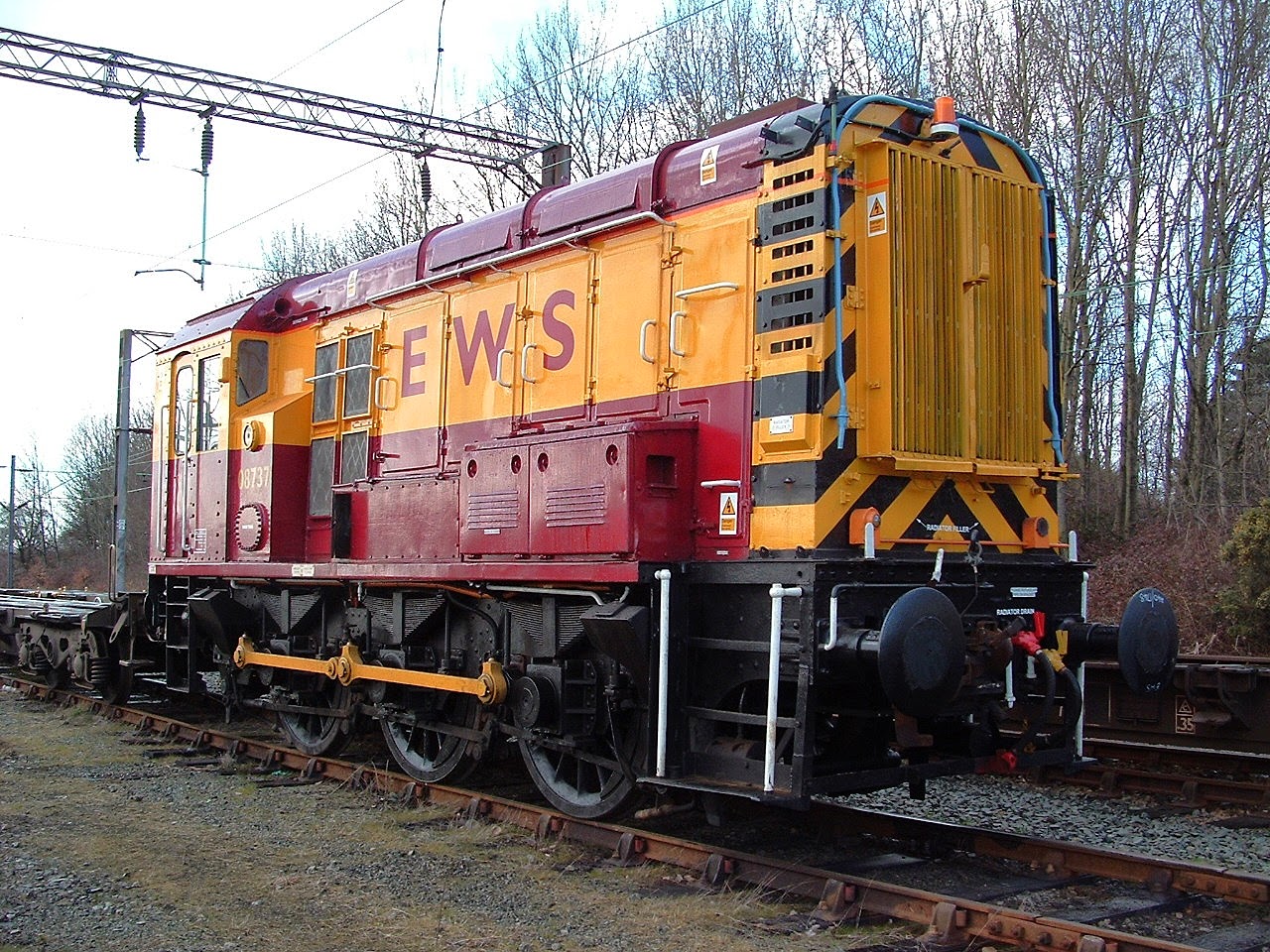