My latest purchase for the ongoing project of building a 'OO Gauge' diesel/electric depot is a Class 92 from Hornby. One of two announced in December 2014, I was surprised to see them both hit the shelves so fast considering the delays that have plagued Hornby (and the other manufacturers) in recent times.

The two models are

46 Class 92 locomotives were built between 1993-1996 primarily for use within the Channel Tunnel. They are quite simply the most powerful electric locomotive ever built for BR and were by far the most technologically advanced loco they had ever introduced. Being dual voltage, they are as at home on DC third rail as they are drawing power from AC overhead wires. The bodyshell is similar to the Class 60 diesel introduced by Brush a couple of years earlier, and in terms of internals, most of the electrics are duplicated. This was a key requirement for the Channel Tunnel to reduce the chance of failure. But while this class of loco ticks all the boxes in terms of performance and ability, its a class that has never ever been utilised anywhere near its true potential. The Channel tunnel has never come close to the kind of volume of traffic that was expected when the project was announced and traffic even declined in the early 2000's due to issues with asylum seekers in Calais. The ill fated 'Nightstar' project was another disaster and the proposed sleeper services between the UK and the continent predictably never materialised.  Currently the Class are operated by DB Schenker and GBRf Europorte. 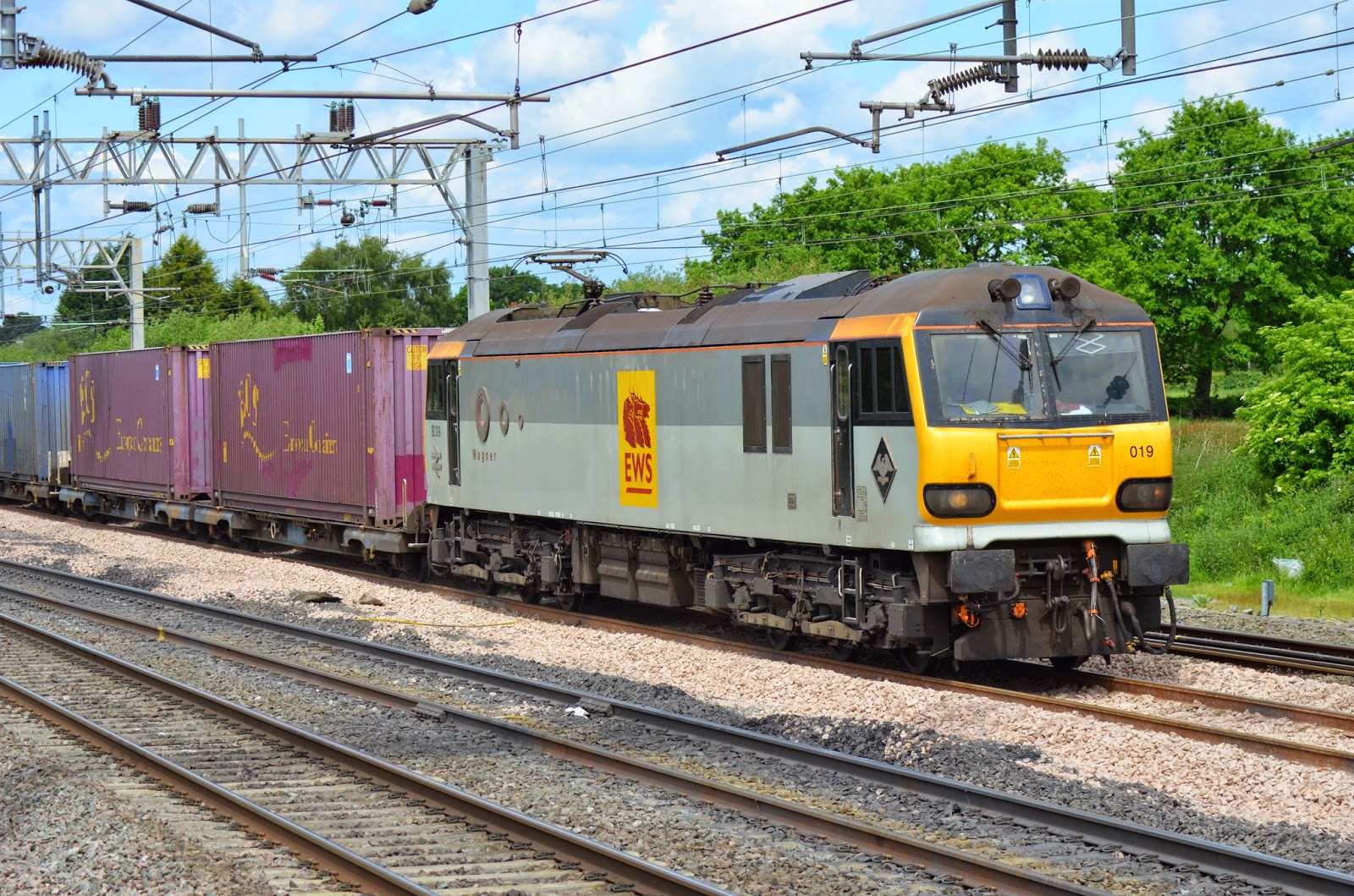 The subject of my review is R3347, 92019 with the EWS branding. This loco is one of ten active Class 92's currently in use with Britains largest freight operator. It is also one of the Class that has received signalling equipment for use on High Speed 1 (HS1). With rumours that DB Schenker are to scale back on Class 92 operation within the UK, due to expensive running costs, this batch of locos could potentially be the last ones to survive. DB Schenker has exported examples to both Bulgaria and Romania, where they have been able to at last fulfil some of their potential. With the above in mind, more are expected to be sent abroad in due course with duties in the UK taken on by Class 66's and pairs of Class 90's. 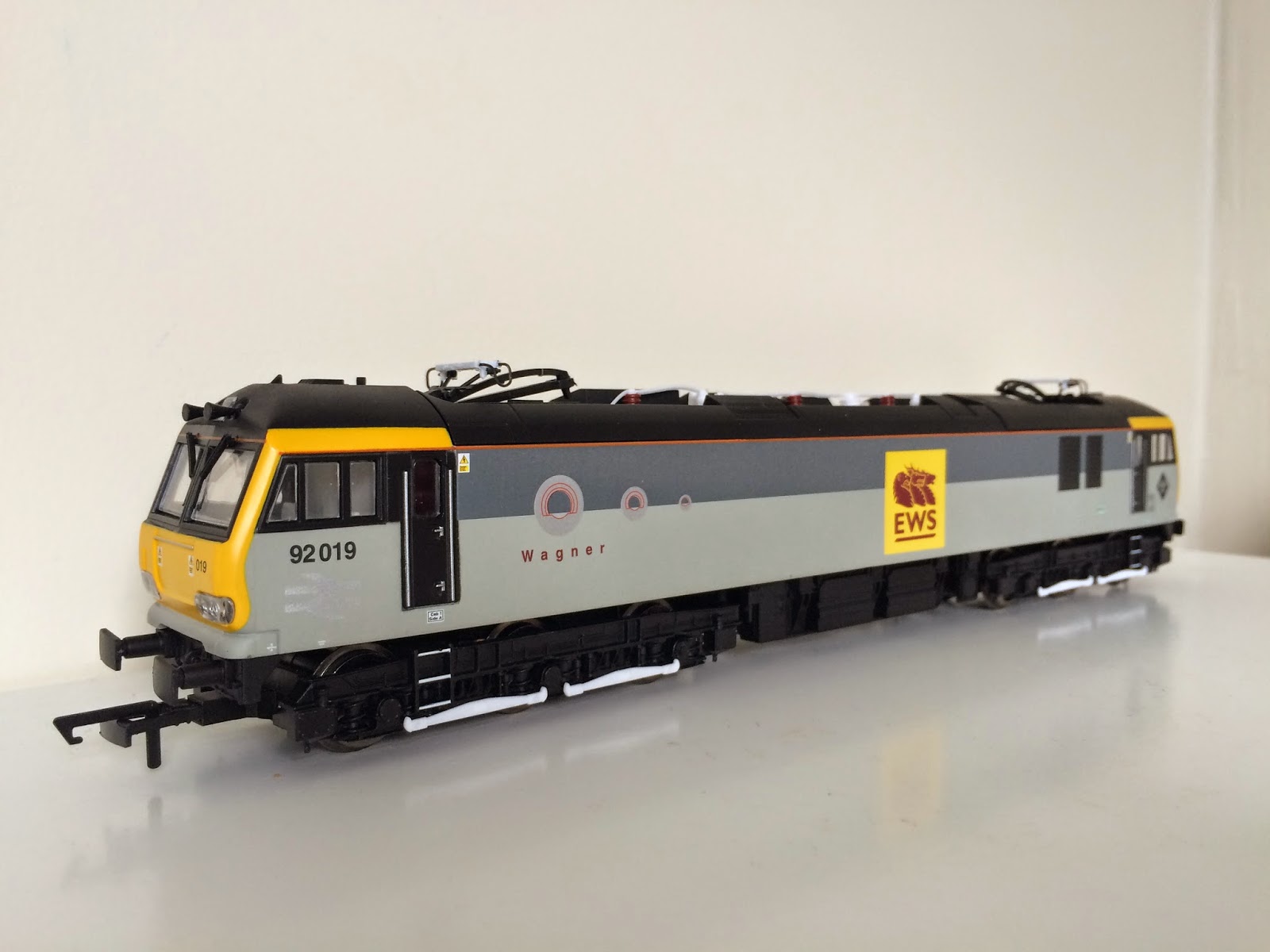 Upon removing the loco from the box there are a couple of things that stand out, sadly these are mainly bad things. The roof colour is wrong, it is painted black but it should actually be blue as per the Eurostars. The Class 92's received the two tone EPS grey livery but instead of gaining the grey roofs as applied to the EPS 37's and 73's, the 92's received blue roofs from the start. The first recipient being 92001 in 1993. Granted these days the accumulation of dirt and grime gives the roof a black appearance however it is still incorrect. What makes this slightly frustrating for myself is that Hornby have produced Class 92's in the EPS two tone grey before (without EWS yellow sticker) and got the roof colour correct. It's another example of shoddy research from them, which may class as passable for something in their Railroad range of products, however the 92 isnt. It sits in the middle of that and the 'Super Detail' range. However, it does appear that somebody in Hornby was expecting the roof to be blue, as the blurb on the back of the box describes the model as having a blue roof. Ooops.. 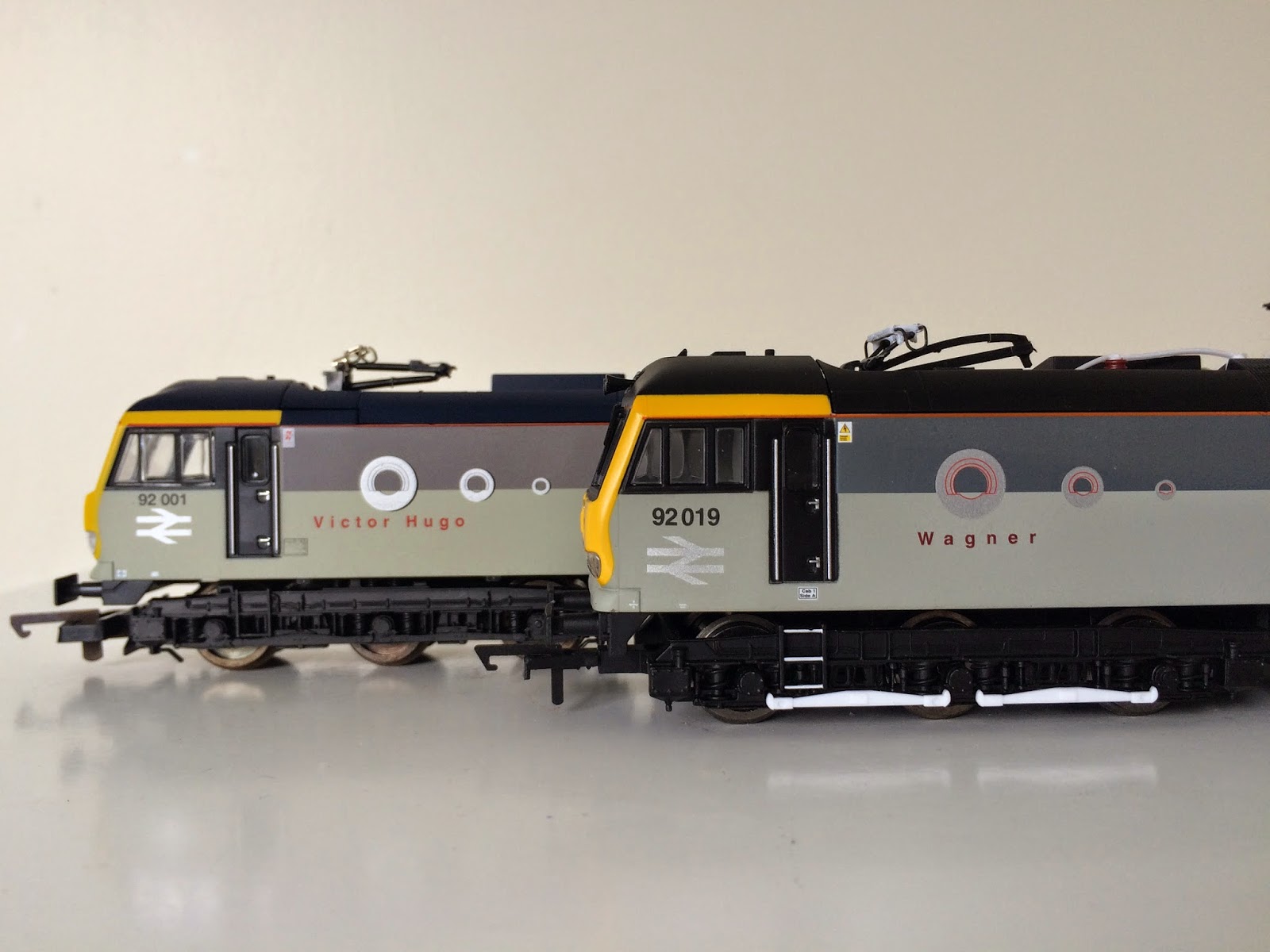 The Hornby model is the foreground next to the Lima version allowing a comparison of size of the running numbers and BR arrows on the two versions, plus the differences between the pantographs

Also the running numbers and BR arrows on the cab sides appear to be oversized. These are problems that I can resolve myself with a few hours work, but I'm not sure if people are forking out £80 for a loco that they should have to for such basic things.

With my two main concerns out of the way, the loco is more or less as expected. Utilising the Hornby tooling of the 92 (Lima also did a version) the loco comes fitted with headlights but no tail lights The loco features the revised chassis introduced a couple of years ago with a 5 Pole Skew Wound motor and an 8 pin DCC socket. The loco has two plastic pantographs which are obviously non working. They don't look that great today but we have to remember when the tooling was introduced in the 90's it was superior to anything previously produced. 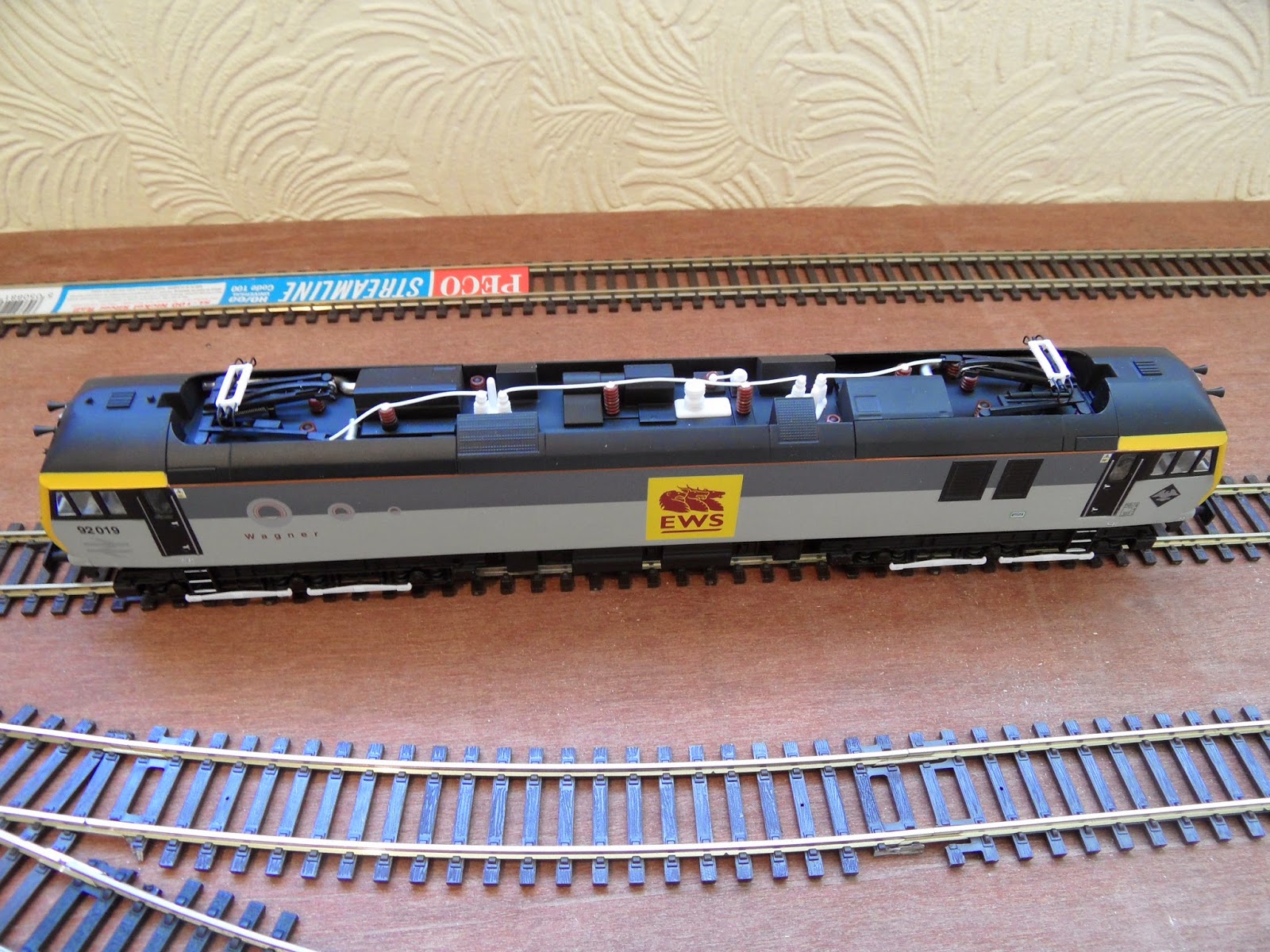 A general view of the roof and pantograph detail

Moving on to the face and the look of the 92, its OK. I think generally it looks like a Class 92, a bit plasticy in areas but on the whole not bad. I've always thought that the Hornby 92 looked a bit 'chunky' and when I place it next to the Lima Class 92 I believe this does stand out. Whilst the chassis and internals are better on the Hornby model, the body of the Lima version is more convincing. 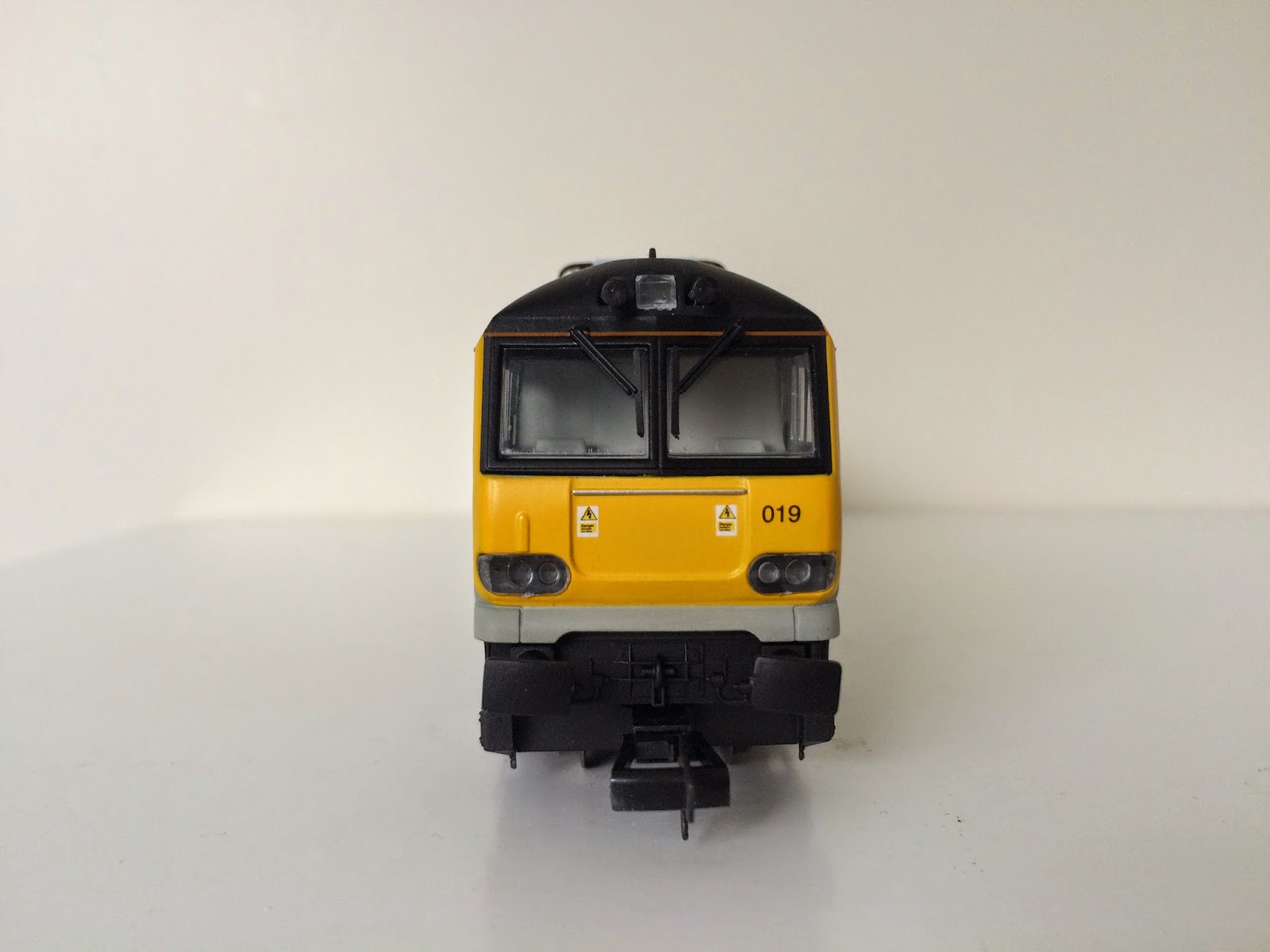 The face of the Hornby model. 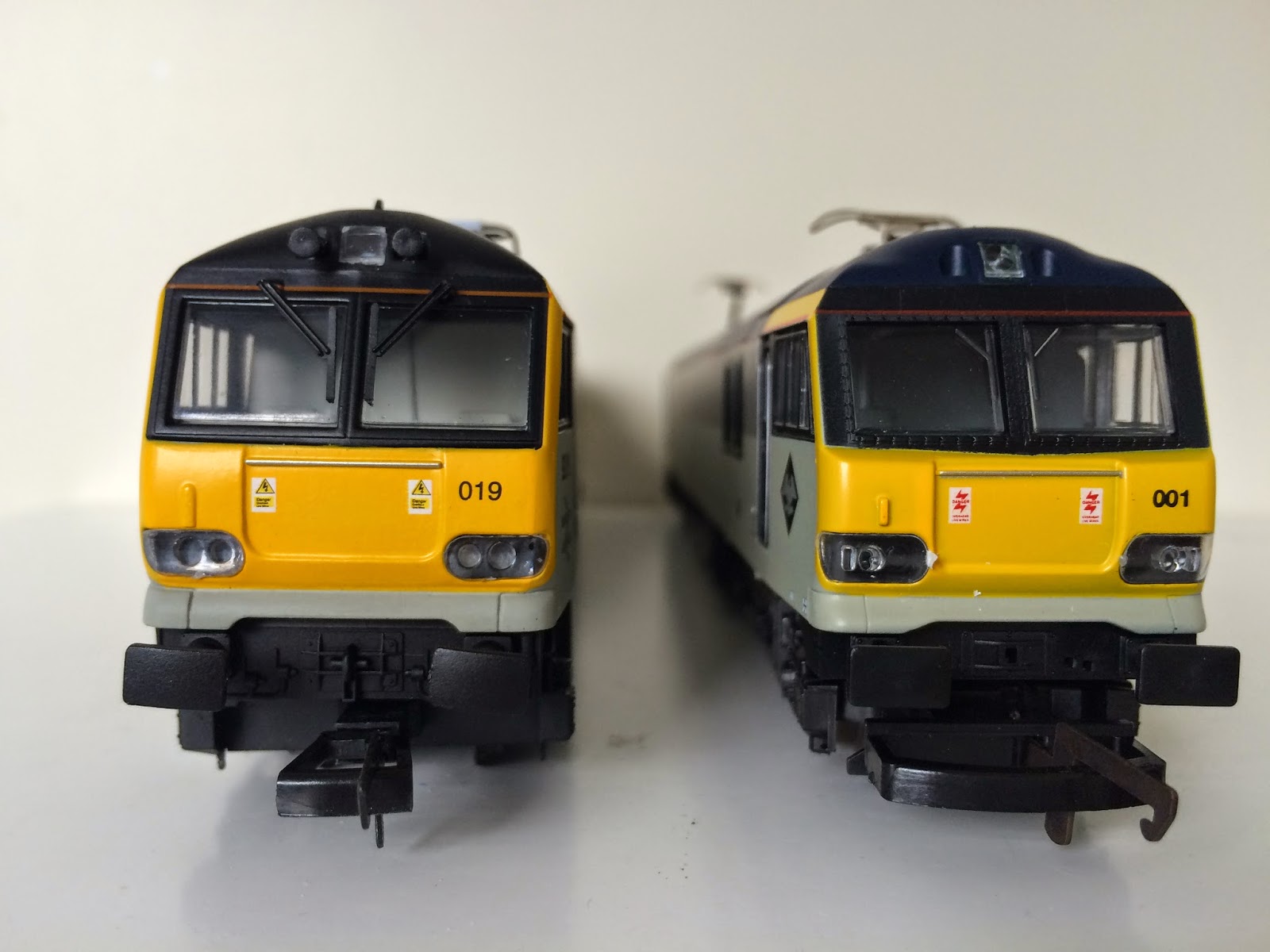 In conclusion then its a welcome release, with an interesting livery that the class has carried for some years now. Whilst I have highlighted some slight issues with the model, notably the roof colour and running number size, most people could probably live with these. For me personally as an electric modeller, I have to try and remain realistic. It is highly unlikely that we will see a retooled super detailed Class 92 released, certainly not anytime soon. It isn't bad straight out of the box, but also could be perfect for a modelling project. Indeed when time permits it will be on my work bench for some improvements. Feeling generous, I'd give the model a 7 out of 10 rating. This isn't an £80 loco, it'd be better priced in the £60 range.
at March 24, 2015