Saturday 21st March saw Pathfinder Tours operate a train between Birmingham International and Carlisle. It wasn't however just a straightforward trip up the WCML, it was routed along the scenic Cumbrian Coast line route. As well as the glorious views on offer, thrown in was some rare access to the private docks branches at both Barrow and Workington. The choice of traction wasn't bad either, a pair of DRS Class 57/0's top and tailing!

The traction for the tour was a pair of Class 57/0 diesels operated by Direct Rail Services (DRS). These locomotives are normally 'Freight only' machines with no ETH and were introduced in the late 1990's by Freightliner. Utilising the body shells of Class 47 diesels, they have refurbished EMD engines and actually have traction motors from Class 56 diesels. allowing them to be introduced at a fraction of the cost of a new build locomotive. 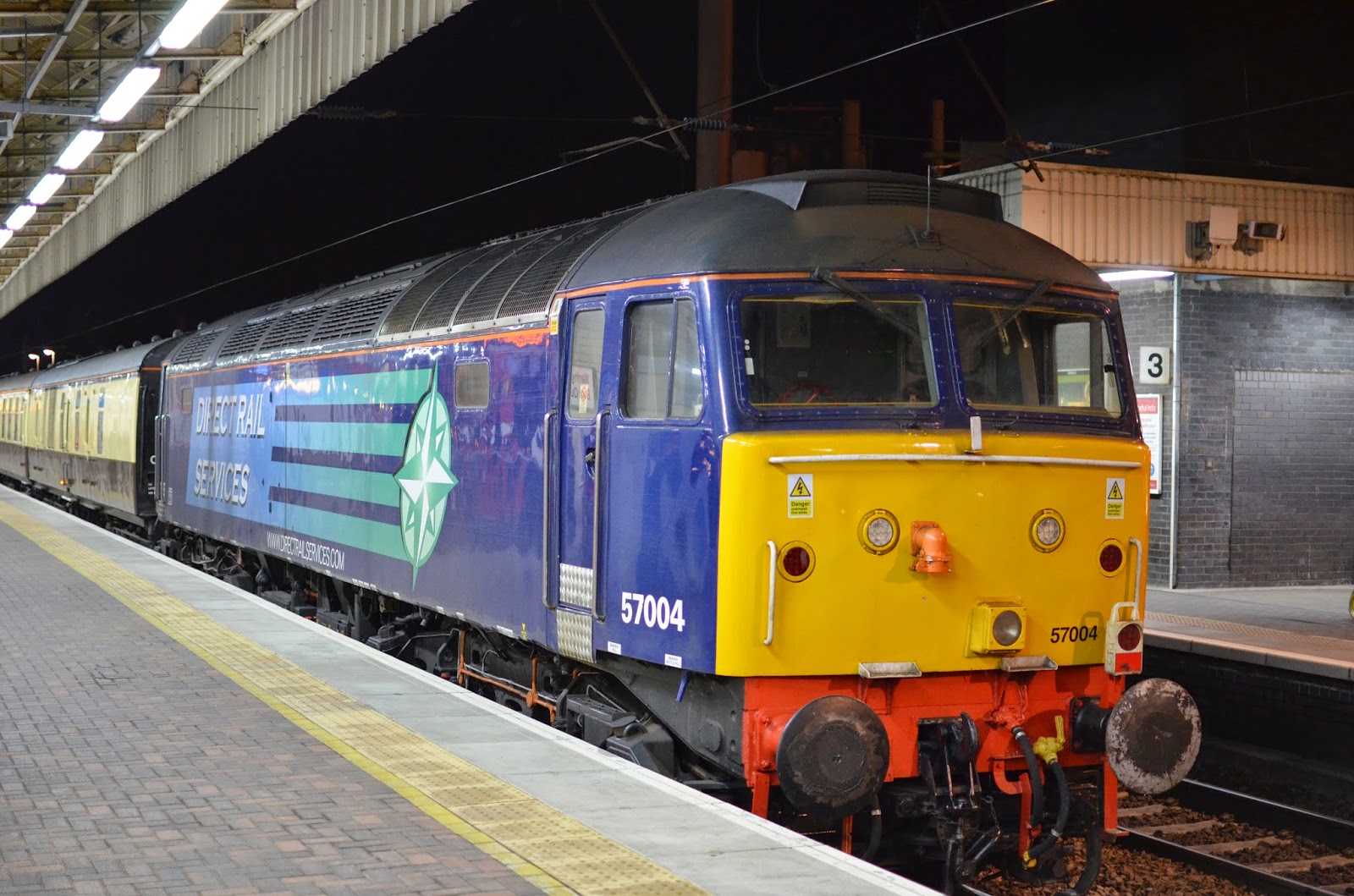 57004 was converted from Class 47 47347 in 1998. Originally operated by Freightliner and named 'Freightliner Quality' it was stood down following the decision in 2007 to start to hand back the locos in favour of Class 66 diesels. Allocated to Carlisle Kingmoor depot and carrying DRS 'Compass' livery, this locomotive is actually owned outright by DRS, unlike the other 8 57/0's which are leased from Porterbrook. Following the crash of 37515 in 2008 and subsequent insurance right off, it was given as a direct replacement. 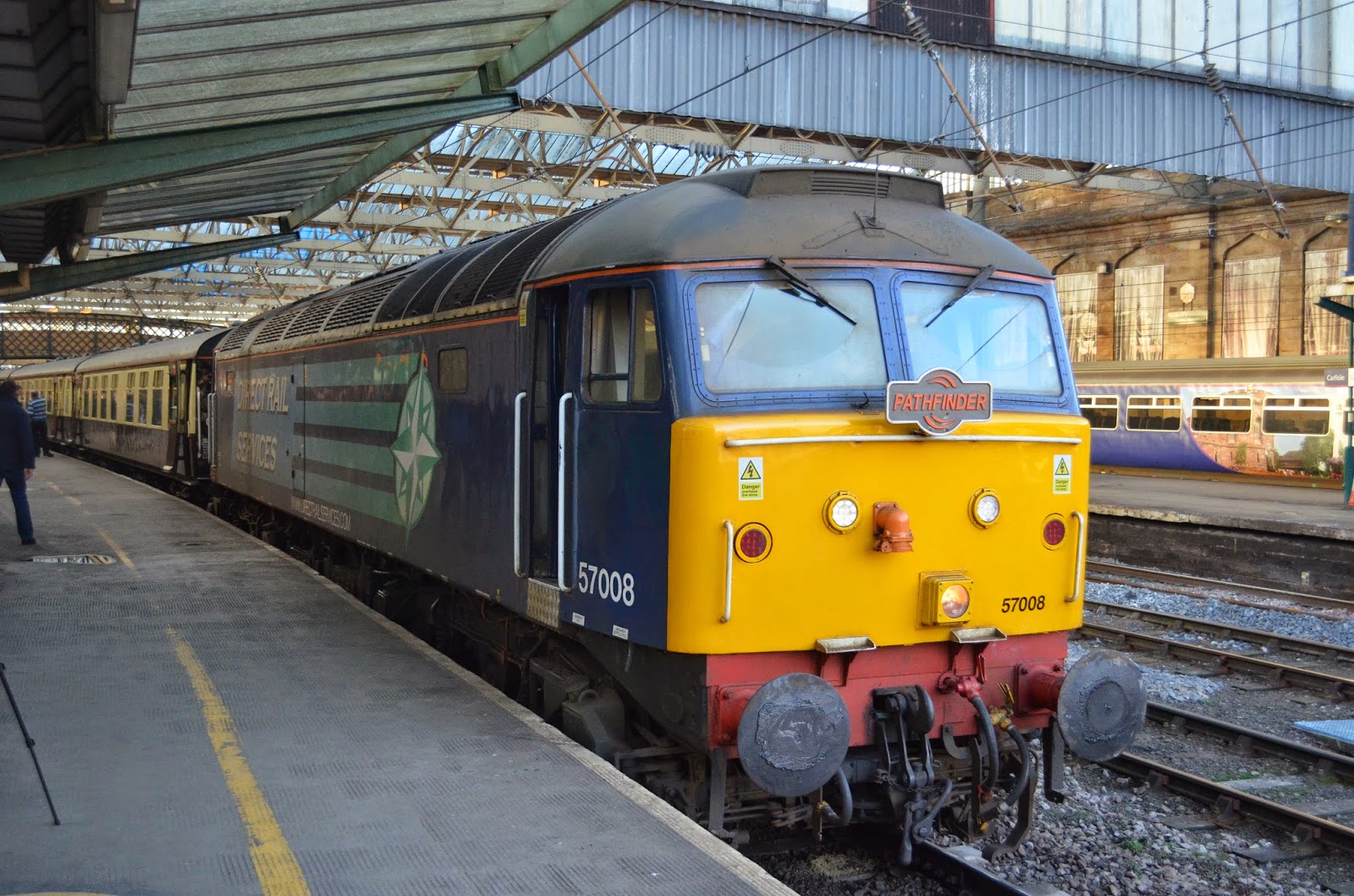 57008 was converted from 47060 and was introduced in 1999. Under Freightliner it was named 'Freightliner Explorer' and again was stood down with the rest of the fleet with the change in traction policy.
With DRS the 57's are mainly used on nuclear flask workings and are particularly well utilised in the Autumn when the RHTT season starts.

The day for myself started at Warrington Bank Quay and at 09:40 the train pulled in to platform 3 with 57004 at the helm, 57008 hanging on at the rear. The coaching stock was formed of Riviera trains MK1's which have been well looked after. So apart from the fact we were being hauled by a pair of locos introduced for freight in old MK1 coaches, it was a fairly standard journey up the West Coast Mainline through Wigan before our last scheduled stop at Preston. From Preston we continued north through Lancaster towards Carnforth. On the approach to Carnforth we were advised by an on board announcement that Intercity liveried 37518 had been moved to a 'phottable' position on the West Coast Railways depot there. With many onboard now on their feet looking out the windows, we slowly crawled past the seemingly endless line of stored coaching and parcel stock stored there. Eventually arriving at the north end of the yard where the diesel depot is located, the coaches were replaced by lines of Class 47 and 57 locomotives with the odd 37 thrown in. With Carnforth out of the way the train branched left and on to the start of the Cumbrian Coast line. Cumbria is beautiful in any weather, but on this line with the sea on one side and the mountains on the other, in full glorious sunshine then it really is something else. Miles and miles of fields, greenery and wildlife. Disturbing the peace and tranquility today was 57004 on the climb towards Ulverston. 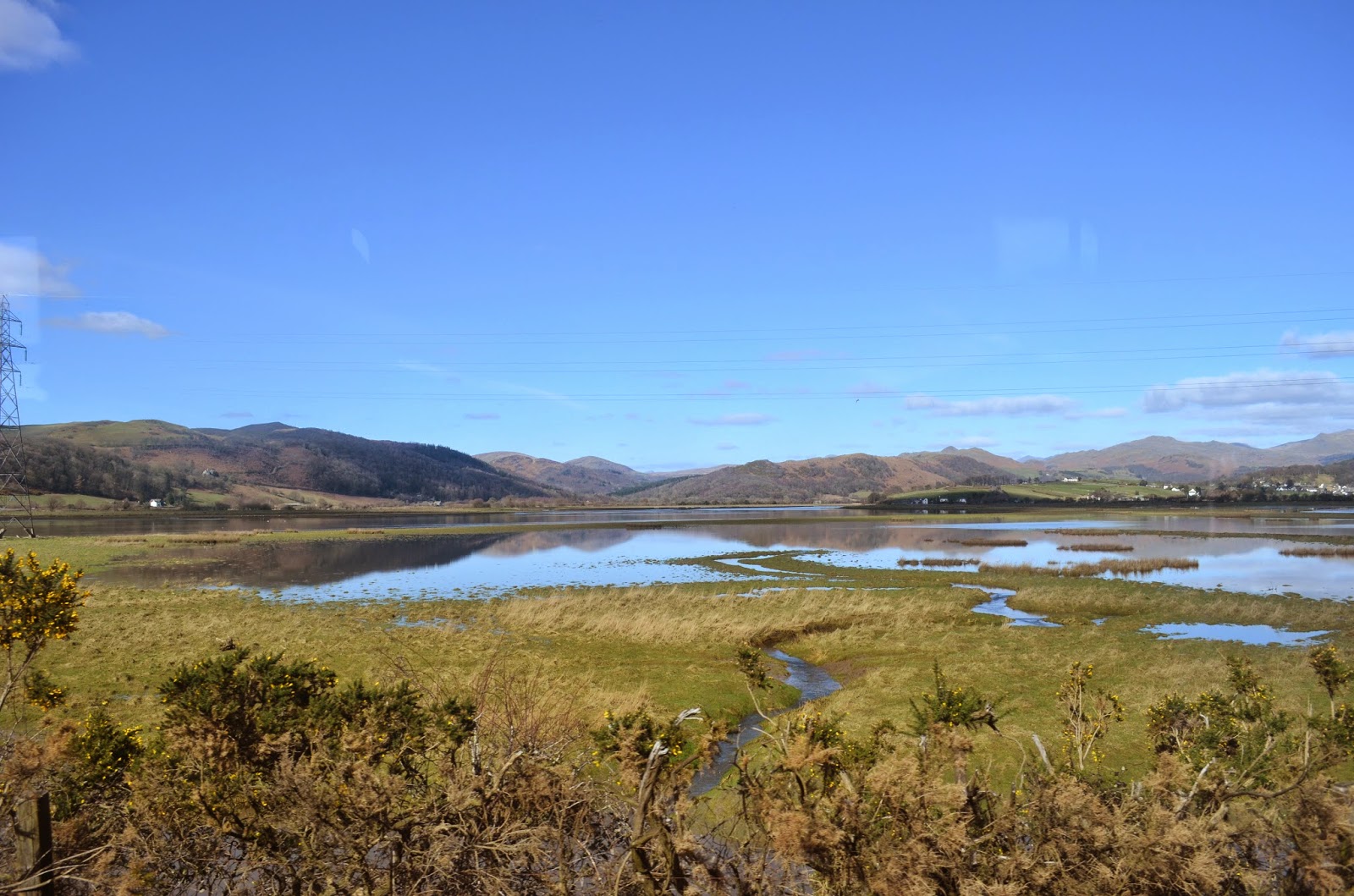 The first private branch line of the day was that of Barrow Docks, something not too many passenger carrying trains have been on in recent times. Today, Barrow docks mainly handles specialist vessels, notably ships from Pacific Nuclear Transport Limited and its nuclear fuel carriers. Security is tight due to the sensitivity of the subject and as such there are a few stops whilst gates are unlocked and the train is given clearance to crawl along the line. Eventually at a stop, the train is next to two PNTL vessels, 'Pacific Heron' and 'Pacific Egret'. These two vessels were introduced in 2008 and 2010 respectively and have security features that enable them to transport MOX fuel and plutonium dioxide from here to Japan. As mentioned above, there have been several issues with the transportation of this cargo over the years mainly involving Greenpeace and the truly reckless behaviour of some of its tree hugging activists. These ships are truly kitted out for this type of Cargo with a double hull and essential systems have backups to ensure reliability, kind of sounds like the Class 92 of the seas... In terms of protection, the vessels are fitted with Naval guns as well as other defence systems. 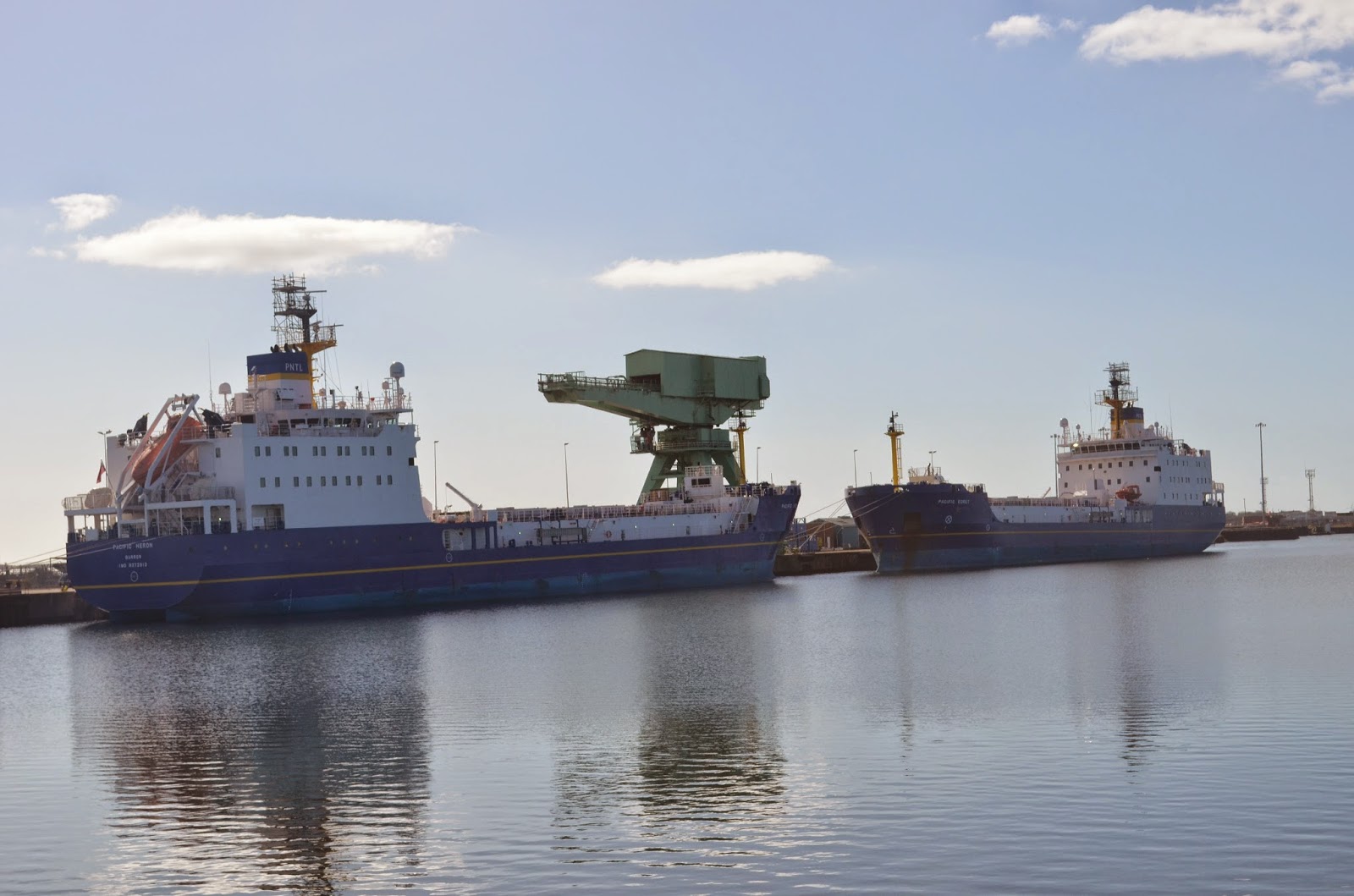 Also in view is the shipyard of BAE systems which is responsible for the design and production of Nuclear submarines. Nearly all of the Royal Navy Submarines were built here, the exceptions being made at Cammell Laird Birkenhead.

Back to the tour and 57008 was started up on the rear of the train to drag us back out of the private line, before handing back over to 004 which was to continue on the northbound trip. With a planned stop at Barrow station for a photocall being called off due to time constraints we were headed to Ravenglass for a quick stop and an opportunity to stretch the old legs. Here is home to the Ravenglass and Eskdale Railway which is a 15 inch narrow gauge railway which stretches for 7 miles to Dalegarth Station. Even with this fine piece of engineering, I couldn't bring myself to point my camera at a 'Kettle'. The stop here allowed an opportunity for some photographs of our train. 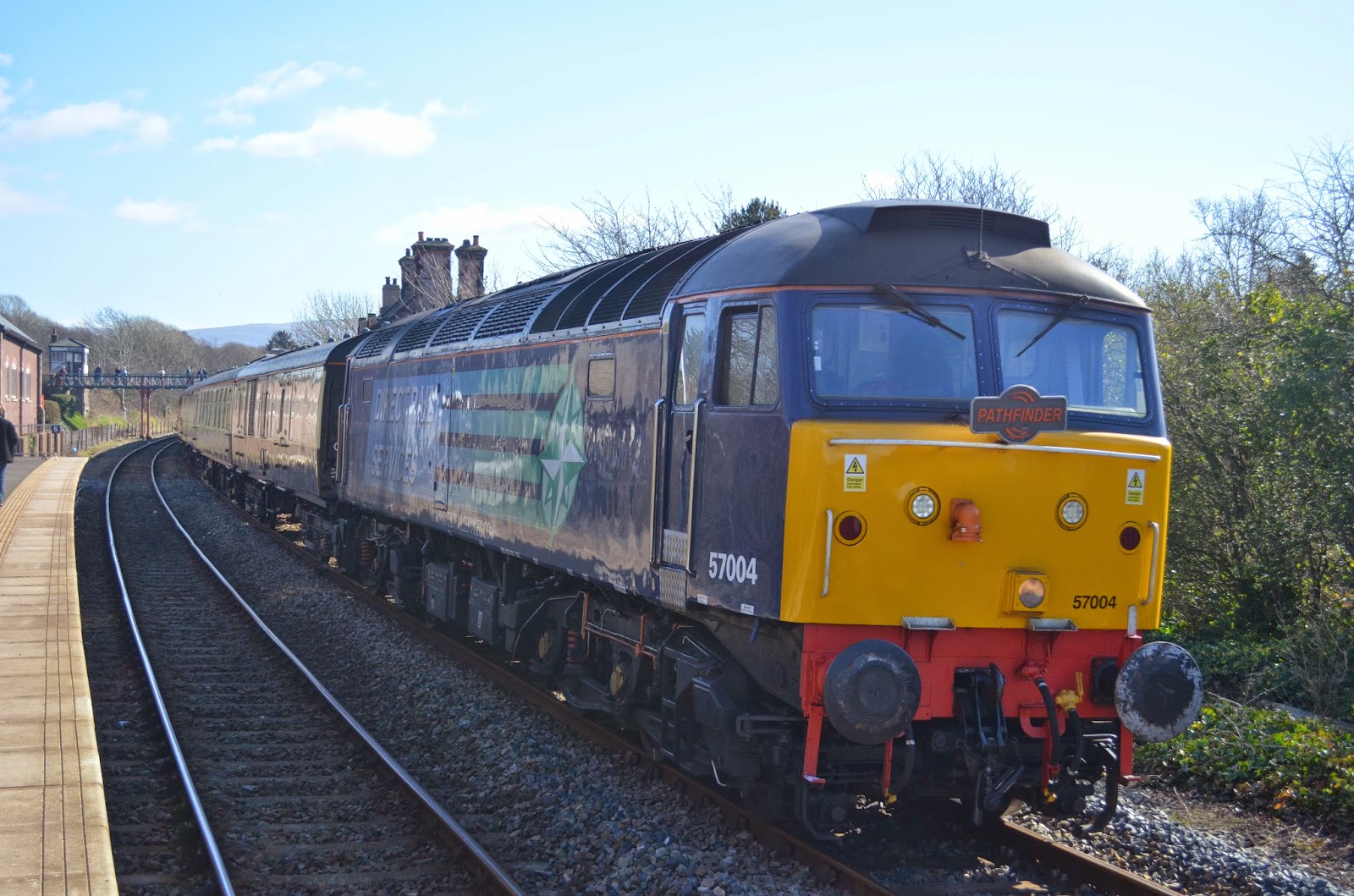 Back on board and back underway, the 57 took no time getting up to speed as we headed for Workington Docks. This section was probably the most beautiful and took in towns such as Sellafield and Whitehaven and was alongside the Irish sea for most of it. At Sellafield, we stopped for a couple of minutes next to the DRS holding sidings and the former DRS diesel depot which now houses the nuclear flask wagons and is still owned by BNFL. In the sidings today were Northern Belle liveried 57306+57312 which had worked up from Crewe that morning. On the headshunt was 37612,37059,57009 and 57002. 37603 and 37611 were also noted within the confines of the depot. 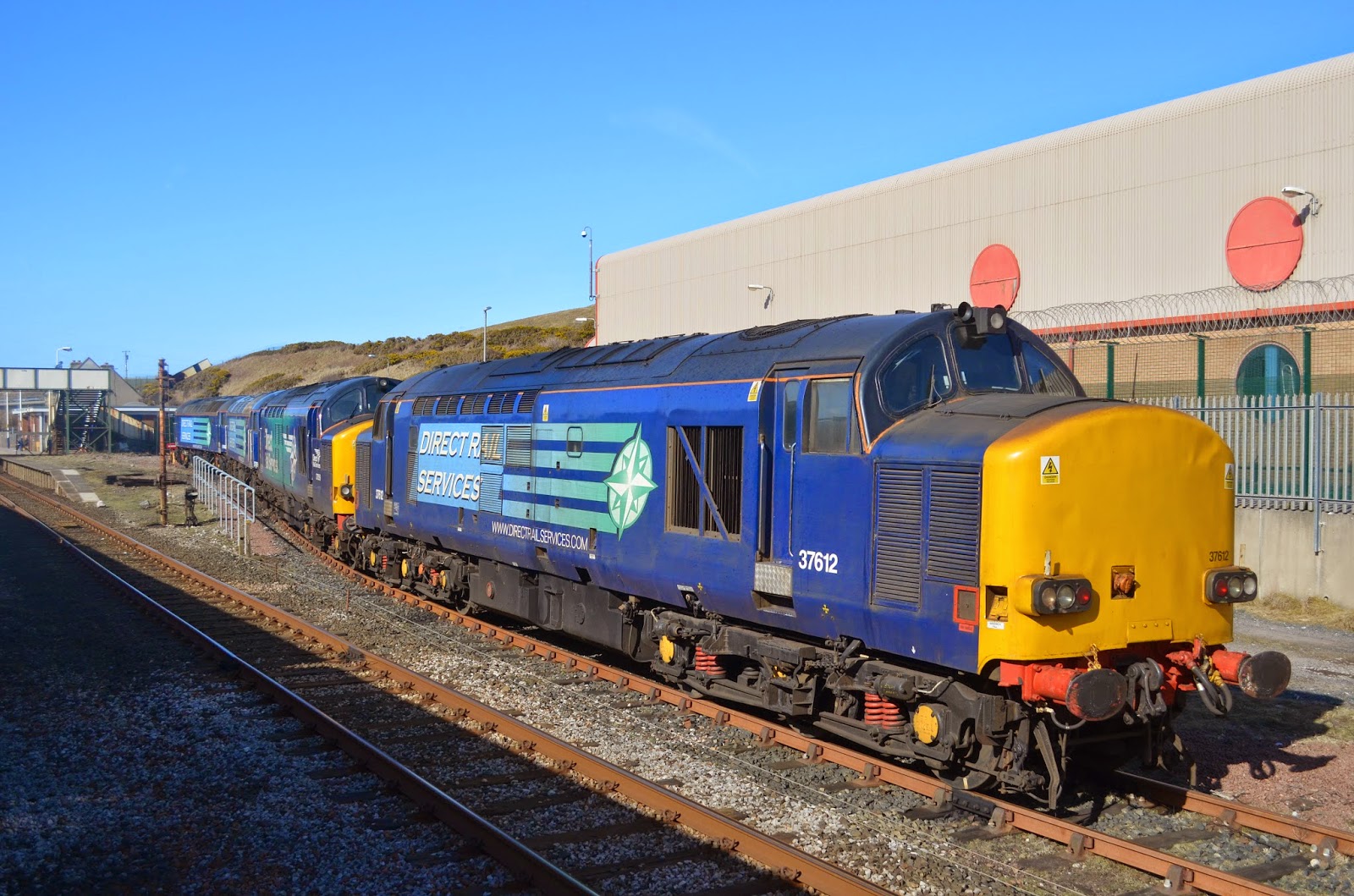 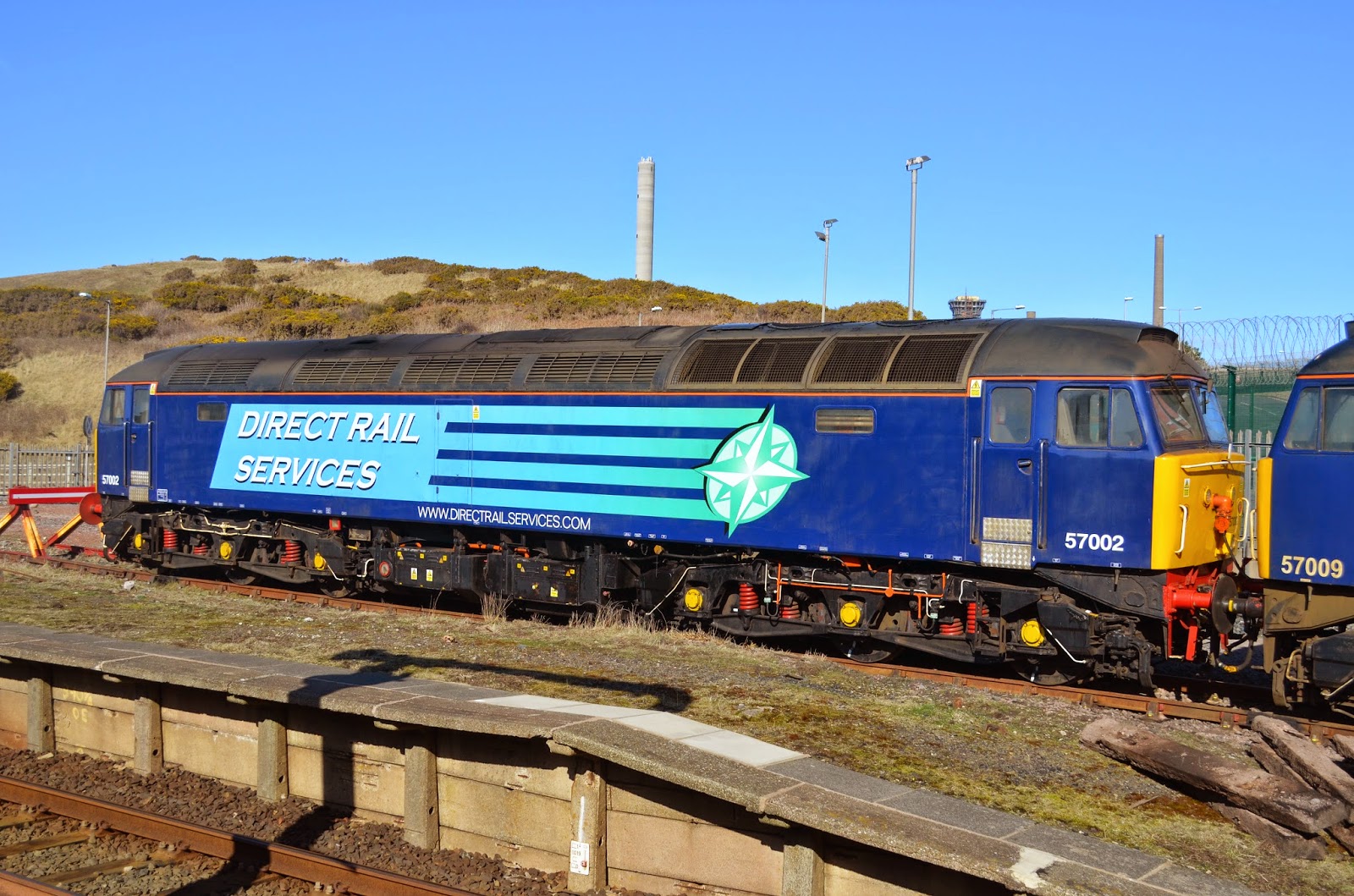 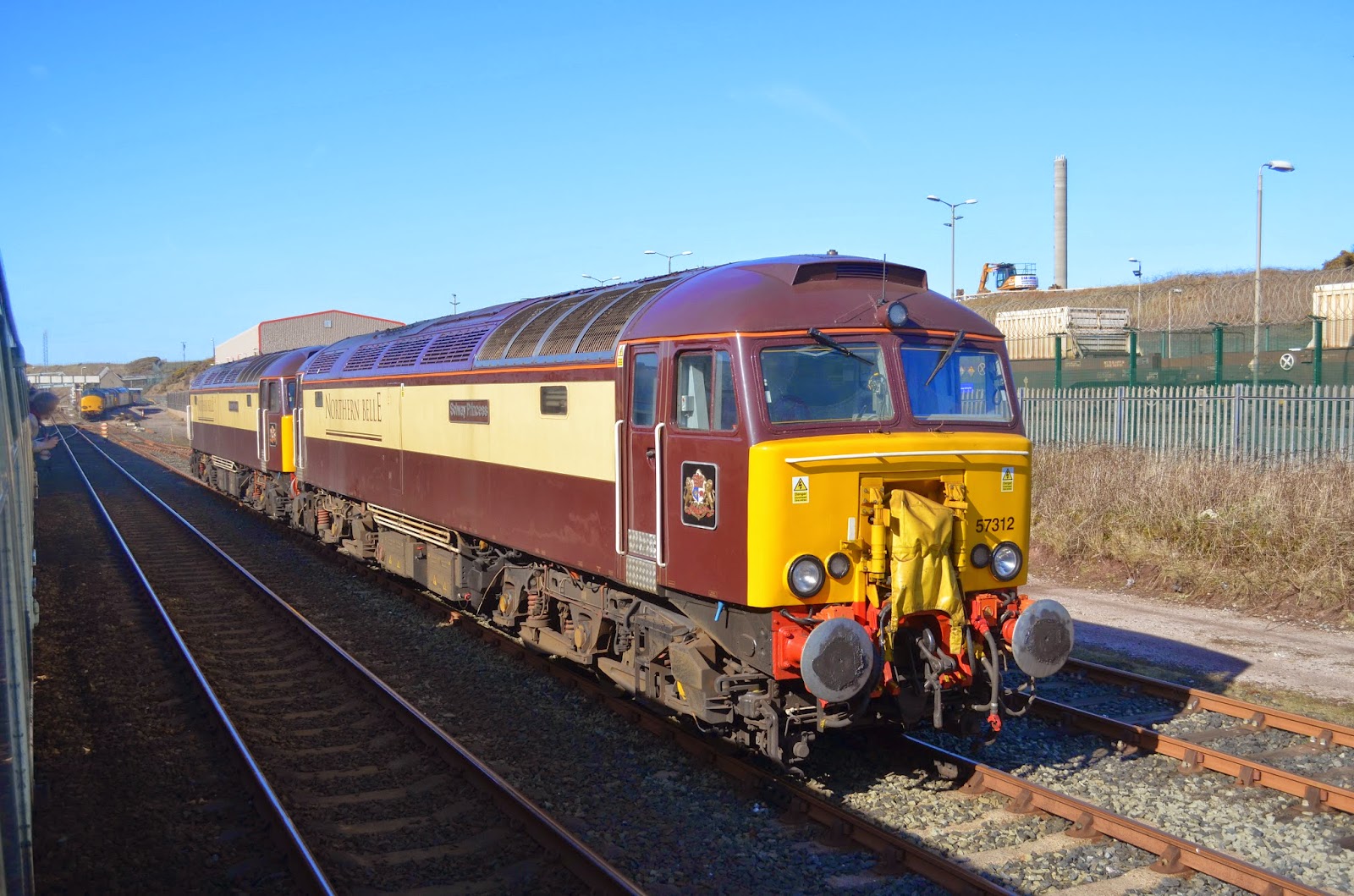 At Workington, the docks branch was accessed by a reversal, so 57008 was put back in to use slowly traversing the internal rail system. Workington docks these days handles about 300,000 tonnes of Cargo per year. This ranges from both dry and liquid bulks and forest products. Indeed on the day of our visit there was activity with timber traffic. In one of the sidings were some French registered 'Silver Bullet' wagons with 'Ermewa' branding. 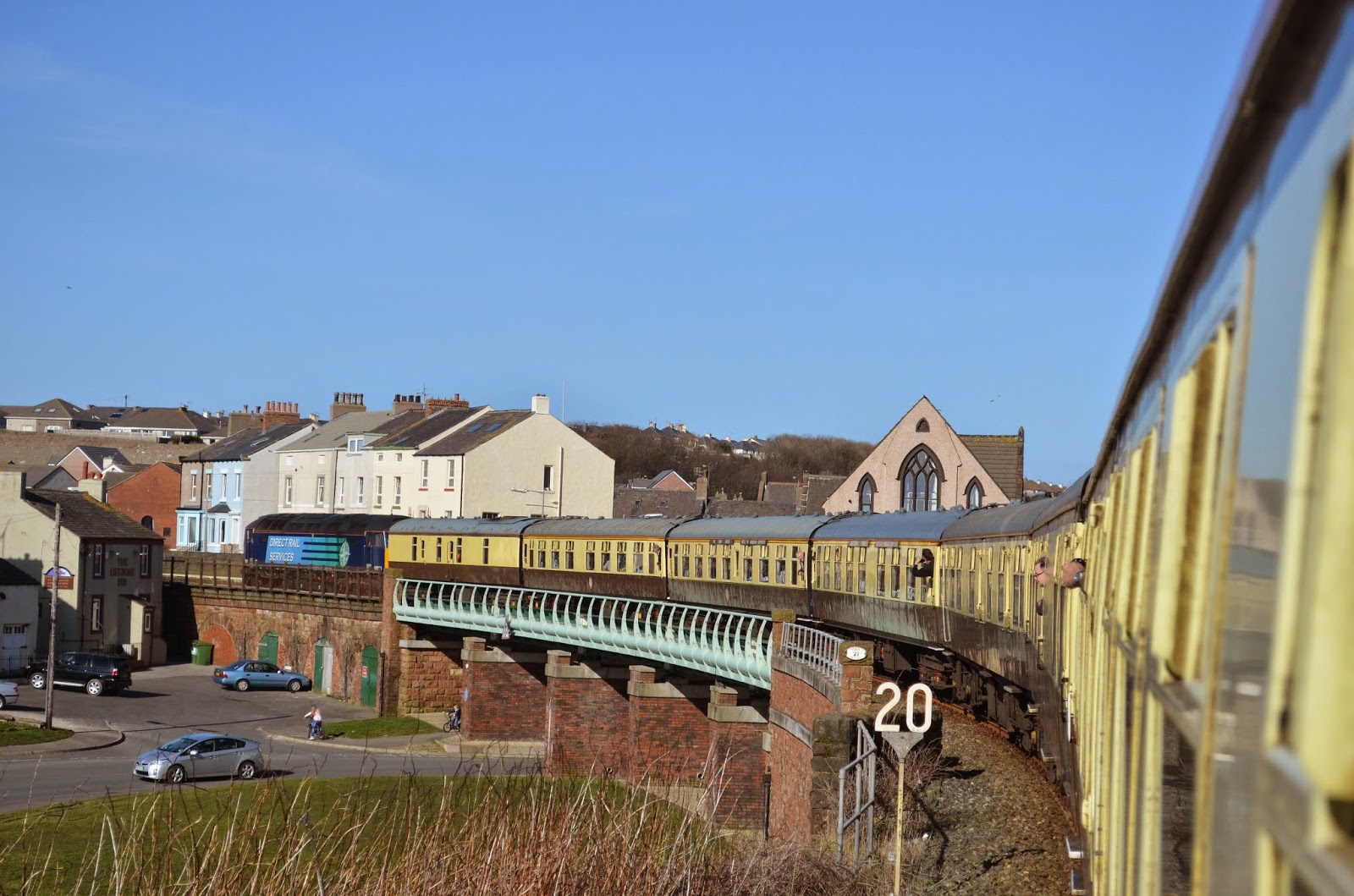 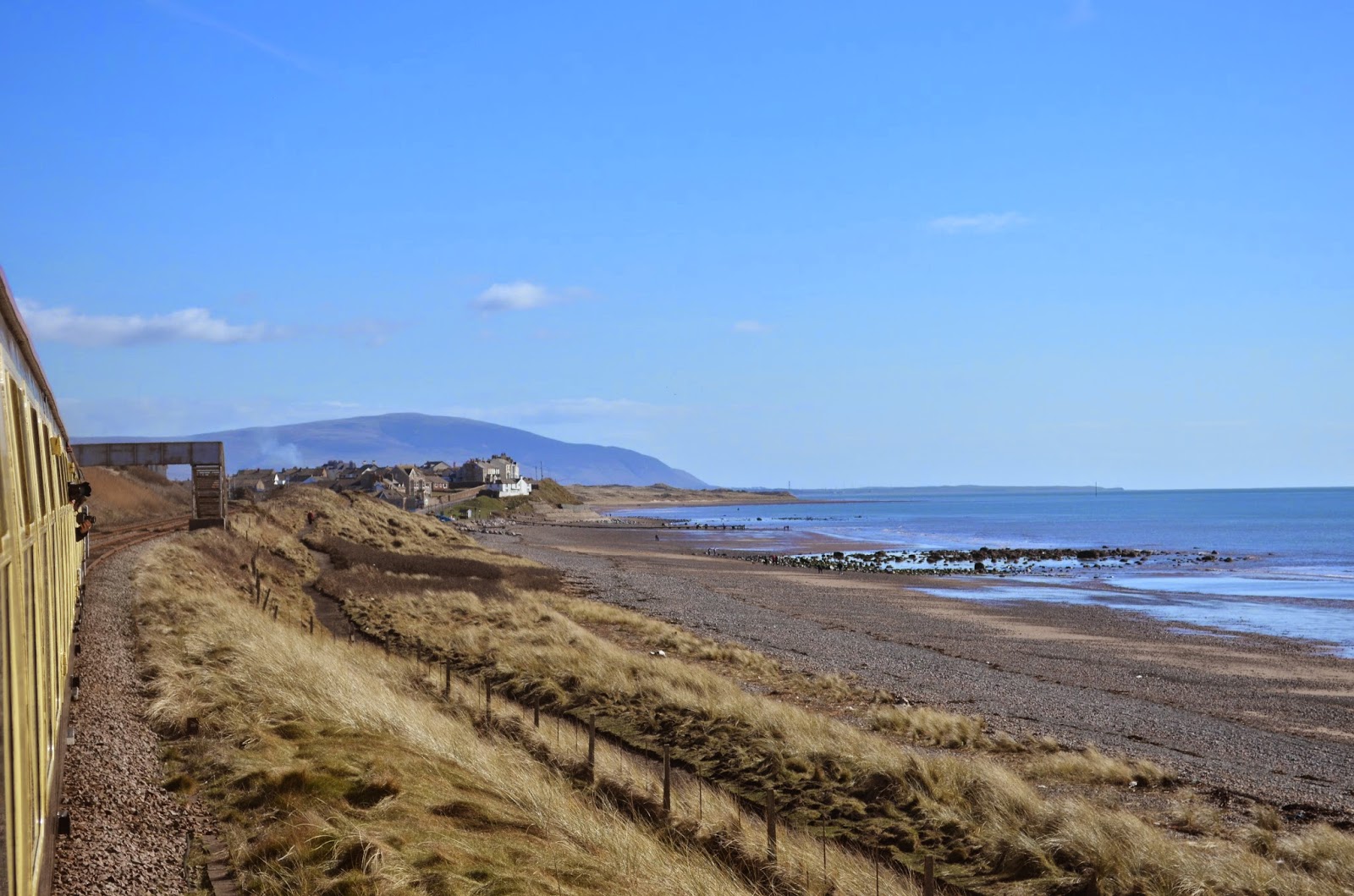 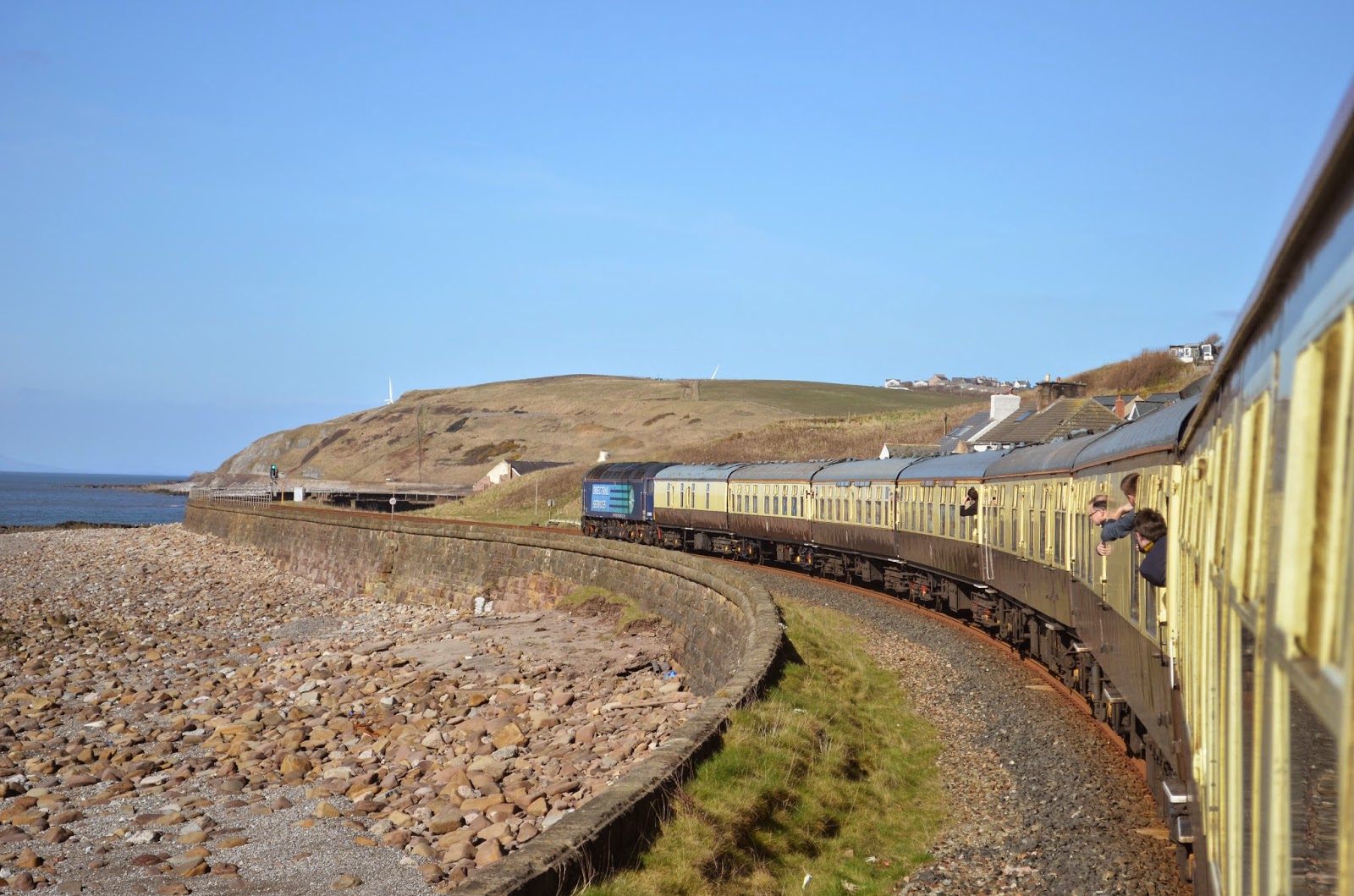 Back on the line and the train was headed to Carlise for a brief 40 minute stop enabling a chance to be fed and watered. On the approach to Carlisle Citadel station we passed the now closed depot at Carlisle Currock. The shed here was closed by EWS in 2007 after being gradually run down over several years like many of their depots. Prior to being mothballed the depot was mainly used for maintaining wagons rather than locos but did still look after a fleet of shunters used in the Carlisle area. The depot is a sad sight today, truly abandoned with smashed windows, doors and overgrowth as well as lifted track. 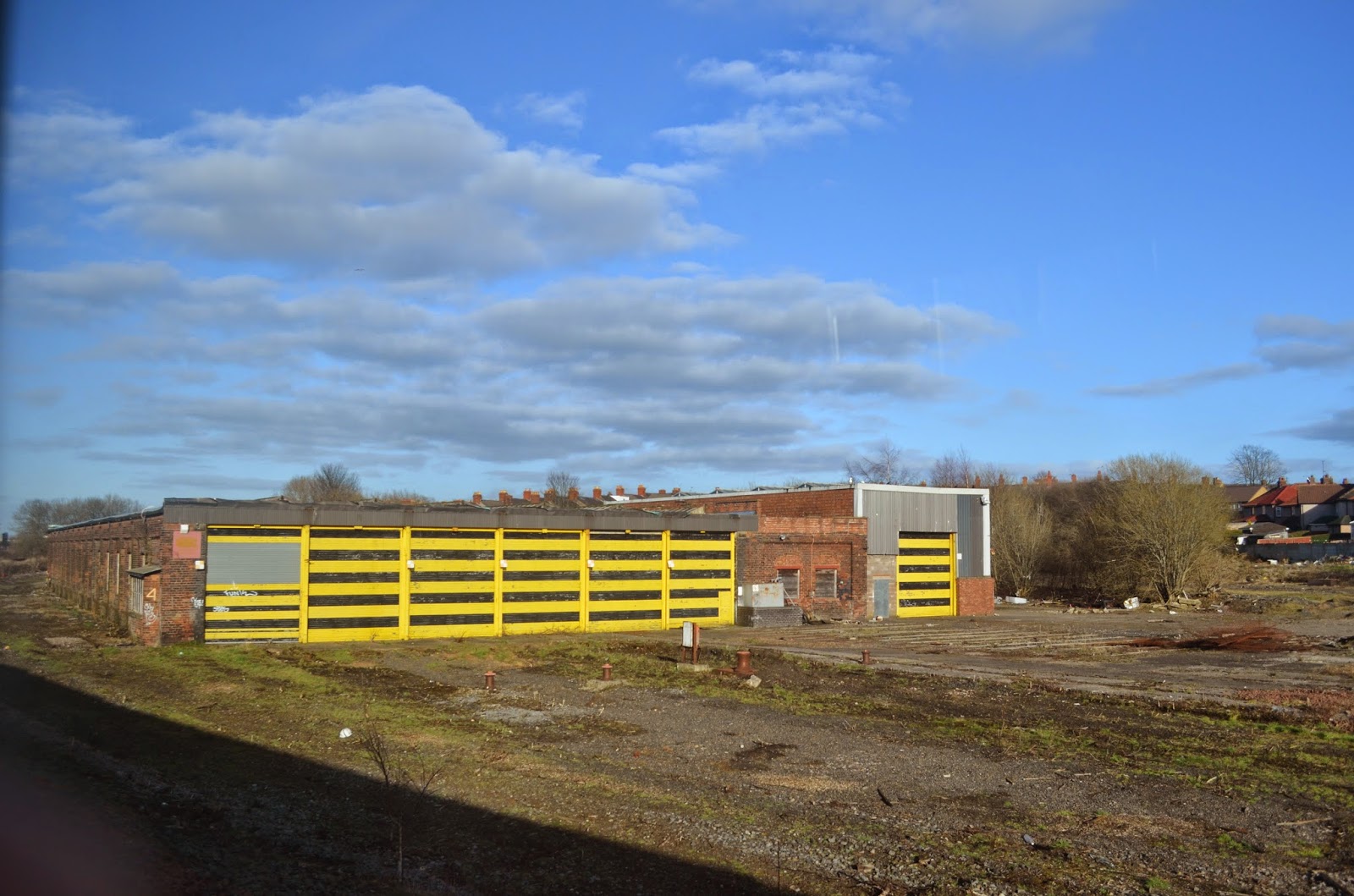 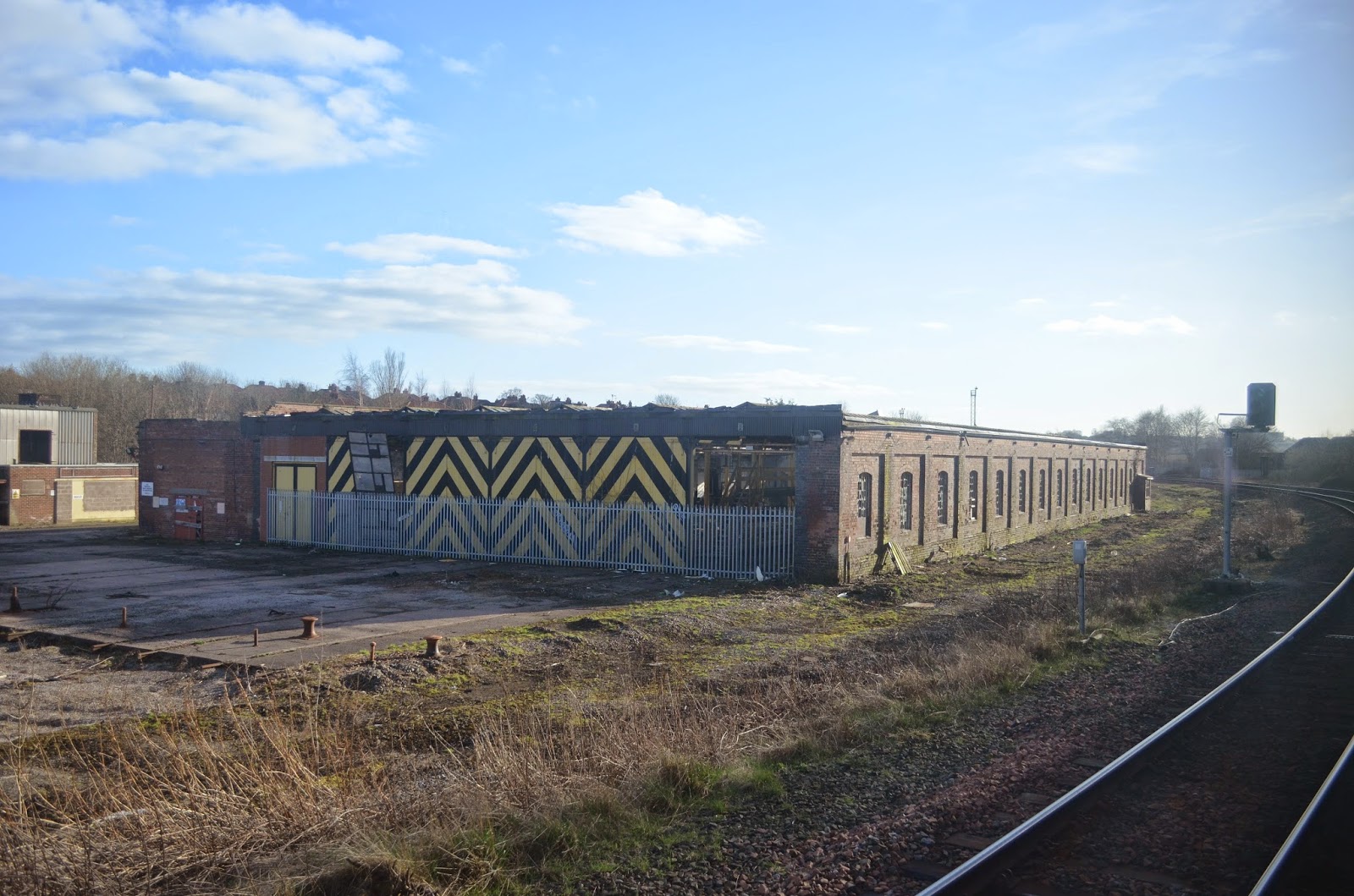 Shortly after we pulled in to Carlisle station and here 57004, with a fair shift behind it today was shut down. The stop in Carlisle was originally scheduled to be a two hour break, however this had to be reduced due to operational reasons throughout the day. Leaving at 17:20 the journey down south on the WCML was also set to be interesting as it took it some goods loops such as the ones at Eden Valley, Shap and Oxenholme. These loops are used normally for freight services to pull in to, allowing faster and higher priority trains to pass. One thing I was particularly looking forward to was seeing how the 57 fared on the climb to Shap Summit, which is 916 feet above sea level and the result was pretty impressive. Between leaving Carlisle and passing through Plumpton, the service had lost 8 minutes. This was maintained even on the climb to Shap and upon arriving at Shap Summit the train had not lost anymore time. At this time of day the sun was disappearing but what a sight the Lune gorge was in the evening light, simply stunning. The rest of the trip down South was mainly in the dark and largely uneventful. Upon arriving at Preston the service was by now 20 minutes late, and at Warrington Bank Quay were I was to leave the train we were late almost the same amount of minutes. Railtour time I think they call it..

So all in all a very good tour, allowing some rare mileage on freight only private branches as well as goods loops. The scenery on offer was unbelieveable as expected for Cumbria but with the weather on our side it just took it to another level. The opportunity to get some miles in behind some 57/0's was not one to be missed either for me personally. The price of the tour was a little higher than what I had paid on recent tours at £89, but perhaps with the ridiculous online booking charge taken out of the the equation, I'd say it was a reasonable price for what was delivered.