On site for contract repairs, Locomotive Services Ltd.'s 08631 is seen outside the workshop at RMS Locotec's Wolsingham base on 29/08/2020. 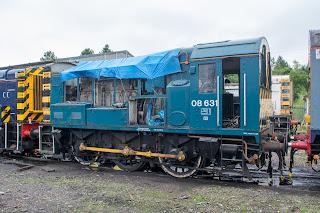 Amongst other things, the generator was away for overhaul at this point with a tarpaulin covering the top with the roof hoods and body side doors removed. Since this picture was taken the generator has returned and the loco has had some test runs around the yard. Should not be too long until it is back in Cheshire all being well. 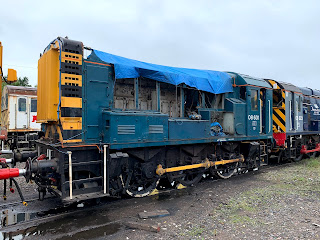 And about the loco.... started life as a product of Derby works in late 1959 as D3798, the loco was first allocated to Stoke but was loaned out to Saltley for a very brief period. It's time allocated at Stoke was also relatively short with the loco moving the short distance to Crewe. A slightly longer spell at Shirebrook followed before once more making its way back to Crewe. The loco also called Wigan Springs Branch home from 1982 but by the mid 80's was stored unserviceable at Toton. Repairs at Swindon were forthcoming and the loco was back in use by summer 1985 initially being allocated to March were it stayed for approx. 3 years. Movement to Cambridge came in 1988 where the loco was painted in to Network South East livery and the name 'Eagle'. Ultimately returning to March for the last days of it's BR career, withdrawal came in 1992 and the loco offered for sale in 1993, initially being purchased for preservation at the Mid-Norfolk Railway. 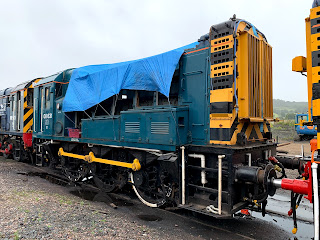 In it's post privatization days the loco has served on hire at locations such as Tyseley and Derby for Fragonset. The loco also making an appearance at Norwich Crown Point in 1999 on hire to 'Anglia'.

Now owned by LSL the loco will be kept busy at the expanding business and should return to Crewe in due course. 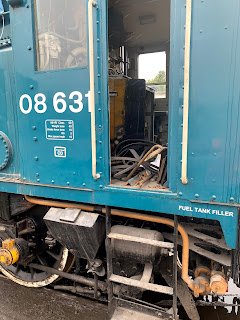