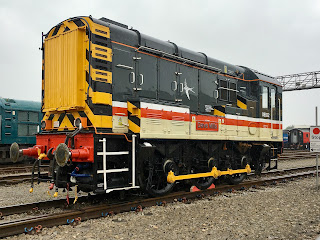 New as D3990 in late 1960 as a product of Derby works, this loco has had a long association with the south west. First allocated to Wadebridge, it has never ventured too far. With spells at Gloucester, Bristol, Newport, Cardiff during it's BR career. Withdrawn at 33 years of age, the loco had a period out of traffic between 1993 and 1995.

Thankfully, the call came and the loco was repaired and reinstated making it's way to Swansea Landore. It's post privatization career has seen it owned by First Group and used at depots on the Great Western. In truth, I don't think it has served anywhere other than Bristol St Phillips Marsh since the early 2000's?